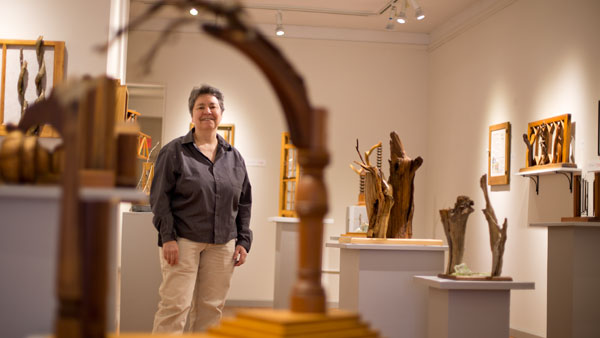 Tucker Mitchell/The Ithacan
Artist Eva Capobianco stands among her artwork in the State of the Art Gallery, which currently houses her exhibit, “Approaching 60,” that examines the artist’s life leading up to her 60th birthday.
By Gabriella Jorio — Contributing Writer
Published: April 16, 2014

State of the Art Gallery

Artist Eva M. Capobianco writes, “When I was in college, my mentor, Jerome Zimmerman, once said, ‘If anyone asks you how long it took you to make a sculpture, you should say ‘All my life.’” Her statement proves to be true as she displays a sculptural retelling of her life in the exhibit “Approaching Sixty,” currently on display at the State of the Art Gallery in downtown Ithaca.

Turning 60-years-old this December, Capobianco tackles the emotional process of aging as she artistically responds to the salient events in her life. When walking around the small space, the carefully crafted pieces illustrate an appreciation for natural forms. In addition, she uses her works to pay tribute to marriage equality, the death of her father, aging and nature’s integration with the urban landscape. Paying homage to her father who died of lung cancer, 20 percent of her profits will be donated to the Cancer Resource Center of the Finger Lakes.

Capobianco admires natural materials, made apparent in the dominant use of found wood in almost every piece. This consistency of materials creates a pleasing coherence, allowing the viewers to experience an atmosphere of calm when browsing the gallery. Most of the wood she uses is kept in its natural state, wildly twisted and tangled. However, she almost always merges the found wood with a human-made object, emphasizing the relationship between nature and humankind.

As a whole, the exhibition also seems to mirror a natural environment. Stepping into it, viewers are immediately greeted by earthy smells and a brightly lit room whose lighting makes the pieces shimmer like a forest freshly showered with raindrops.

The combination of lighting and untamed wood also makes for bold shadows on the white walls of the gallery, which mirror the crooked pieces of wood. Whether intentional or not, the shadows produce a dynamic extension of the artworks, suggesting time to be illusionistic as the shadows of past artworks cast themselves into the present space.

Though Capobianco’s exhibit features decades of her life’s work, she always stays true to her wood medium, the art praising its beauty in a natural state. However, while staying loyal to her choice of medium her style shows differentiation over time. Her earliest works in the exhibit feature wood, glass and photographs, while her current works feature more embroidery. Capobianco’s changing style enhances the exhibit’s passing of time.

While some works were created recently in 2014, others date back to the 1970s. In her statement, she said, “As I have matured along with the artwork, I have often observed that we artists tend to go back and revisit the same issues and themes repeatedly.” Hence the title “Approaching Sixty,” in which Capobianco reflects on the past as she approaches the future.

In her piece titled “Some Cages II,” she features a dual framed, wooden panel featuring embroidery, wood and wire. The top panel features an embroidered chicken, a rainbow and lines of poetry reading: “The state: California/ The date: November 4, 2008/ The votes: 6,582,471 against/ gay marriage/ 7,747,398 for/ better caging/ conditions/ for farm/ animals.”

The lower panel of “Some Cages II” depicts an embroidered rooster with the words, “Some cages are more obvious than others.” The image is then covered in a wire lattice, representing a cage. Though she depicts a cage that shelters animals, the piece is also symbolic of one that confines people, forbidding their right to same sex marriage. Thus, the cage becomes a symbol for the absence of freedom. The intelligent symbolism improves the exhibit in the way it communicates the artist’s opinions while still leaving room for the viewers’ opinions.

Most of the older works in the exhibit are located toward the back of the room, offering viewers a slightly different style that integrates photographs of urban environments with natural materials. The pieces are placed behind a wooden frame, acting as a barrier, illustrating the power nature has over the industrialization of cities. The juxtaposition between the two serves as an interesting conversation about urban development and its destruction of nature, which allows the viewers to face their own role in nature’s degradation.

“Approaching Sixty” is a stunning exhibit with visual coherence and carefully crafted works, each commenting on one of Capobianco’s experiences. Though the exhibit serves as a vignette of the artist’s life, the visitors will be pleased in the way she offers an inclusive environment. The exhibit warmly welcomes its visitors and invites a conversation about the relatable experiences it features.