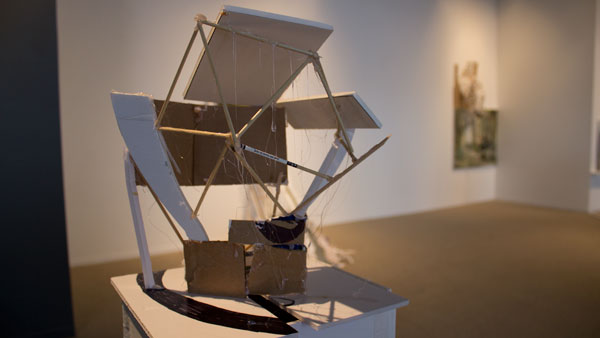 Corey Hess/The Ithacan
A found object structure made of cardboard and wood sits in the Handwerker Gallery. The piece is a part of the exhibit "Your Margins, Your Rivers, Your Diminutive Villages" by Patte Loper, who will give a talk at 6 p.m. Feb. 20 in the gallery.
By Evin Billington — Accent Editor
Published: February 19, 2014

Boston- and Brooklyn-based artist Patte Loper’s work is featured in the Handwerker Gallery until March 7 in an exhibit titled “Your Margins, Your Rivers, Your Diminutive Villages.” Her exhibit is composed of oil paintings and abstract geometric structures constructed from found objects. Loper will give a talk at 6 p.m. Feb. 20 in the Handwerker Gallery.

Accent Editor Evin Billington spoke with Loper about inspirations for her work and her creative process.

Evin Billington: Your work for the exhibit in the Handwerker was influenced by your time on Governors Island in New York City. What specific parts of that area were you most inspired by?

Patte Loper: There were a few things I was really intrigued by on the island. The first thing was the fact that the island is pretty deserted during the weekday. There’s no tourists around, so it’s only park facility people and artists and maybe a few workmen and stuff, so it’s basically deserted. But the harbor is full of boats, and there are always helicopters flying overhead for tourists, but it kind of seems militarized. You really get this sense when you’re there that you’re … in the stillness in the middle of all of this chaos. The buildings are deserted, it’s very strange.

EB: You use found objects in your pieces. What do you like about this particular medium and why do you pair it with traditional oil paintings?

PL: It has to do with this idea of what’s valued and what’s not valued. Obviously, oil paint on canvas is something that has this sort of sense of great historical value and old cardboard boxes from a liquor store do not. I really like the juxtaposition of that. I also feel that even though it’s just a tiny thing that I’m doing, it’s part of an environmental responsibility to try to take something or show that you can take something that’s devalued and that is useful and that we actually kind of discard a lot that maybe we could be using in other ways.

PL: A lot of it actually comes down to stuff that I can kind of cut up and reform. I work in this very, very low-tech way. A lot of it is stuff that’s lightweight enough that I can carry it, and also stuff that’s around that’ll be available so I can have a lot of it. Cardboard is great for that. I teach at a school that has this great woodshop, and I could go and dig through the garbage, and I would find interesting pieces of wood. I also live in Brooklyn where there’s a lot of interesting garbage. Interesting moving palettes and plastic and pieces of construction … Kind of anything.

EB: Your found object structures are displayed next to paintings. What are you trying to convey by putting them so close together?

PL: For me, the painting process is really different. Actually, in my last show, I was actually painting the objects from observation and putting them into these hypothetical landscapes. At the Handwerker, I made the paintings actually kind of just more responding to the [found object] structures and not really trying to literally paint them. It was a less literal process, I wanted the paintings to be more like backdrops or props to the [structures], to kind of contextualize them, to give you the idea that they have this relationship with the landscape.

PL: I used to plan a lot and would do a lot of research and a lot of preliminary sketches and drawings, but lately I’ve just been much more interested in surrealist automatism, especially because I don’t know how to build. I’m not trained as a sculptor, so that frees me up from using any actual kind of technique. It really becomes this kind of battle, or maybe collaboration, between me and the material, and when you’re working in that way, I have to work really quickly. I don’t understand how to build slowly, or the whole thing will fall over. That brings out this very intuitive, automatic kind of process.