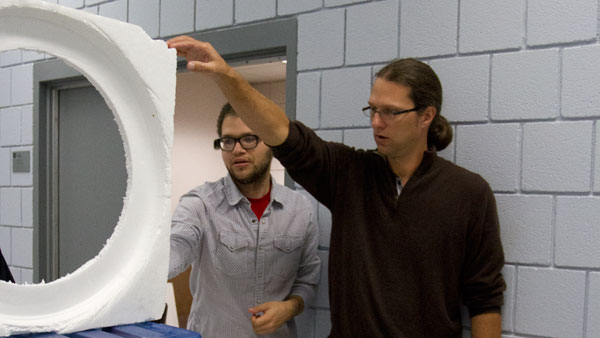 Jason Harrington, assistant professor in the Department of Media Arts, Sciences and Studies, was honored in two film festivals last weekend. His animated short film, “Breathing In,” was included in the “Best of International Films” screenings at the Canberra Short Film Festival in Canberra, Australia and at the Cinéfest Sudbury International Film Festival in Greater Sudbury, Canada.

“Breathing In” takes a spin on ancient mythology as an unnamed girl moves through the microcosms of the universe. Harrington’s film has been shown in festivals across the globe, including Cinanima in Espinho, Portugal; Big Muddy in Carbondale, Ill.; the University Film and Video Association Conference at Chapman University in Orange, Calif.; Starz Film Festival in Denver, Colo.; and the Finger Lakes Environmental Film Festival in Ithaca.

Contributing Writer Ashley Wolf sat down with Harrington to discuss his film background, the process of making “Breathing In” and his love of animation.

Ashley Wolf: Can you tell me a little bit about your background?

Jason Harrington: As an undergrad, I was looking at marine biology and biology, but my family was into the arts, so in undergrad I was taking a lot of art classes. I took a couple of film classes and an animation class. At that time, it was getting late to concentrate in that area. When I got out of undergrad, I realized I really wanted to do that.

AW: How was the process of making “Breathing In?”

JH: Long! I did that in a little under two years. My process is very organic. I write and draw a lot. I’m always writing concepts and ideas down then sketching them and coming up with visual ideas. At a certain point, the film starts to come together, and the idea starts to come together, then I start to storyboard it, come up with it frame-by-frame, and then the work begins. In “Breathing In,” I wanted an oil-painted look. It’s digital, but I really wanted texture and brushes and paint. I like layers. There’s a lot in the imagery that’s there, and a lot that’s hidden and there’s words that are embedded into the piece. The whole film is a morphing of ideas.

AW: Do you draw everything out, or do you use a program where you can have the animation move?

JH: I am working digitally, there are some things the program can do. It’s really easy for me to pan on a background, like to make a background and just move gently across. I have to redraw the characters moving on that background. I draw the movement frame-by-frame.

AW: What is your connection to the storyline of “Breathing In?”

AW: Who are your influences?

JH: I love Ruth Lingford’s films. There are a few grey animators out there who are working very visually and who are making paintings move. I think of Ruth Lingford, William Kentridge, Yuri Norshteyn and Georges Schwizgebel.

AW: How did you get your films into the festivals?

JH: You send them out and hope that they like your films. They look at tons of work, and it’s competitive. You get rejected a lot, but “Breathing In” has done well. My main thing is that people see it.