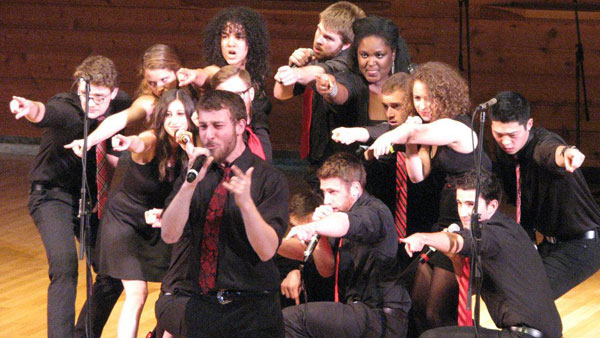 Courtesy of IC Voicestream
IC Voicestream, a coed a cappella group, performs during the semifinal round of the International Championship of Collegiate A Cappella on March 29 at Rutgers University. The group did not qualify for the final rounds in New York City.
By Kelli Kyle — Staff Writer
Published: April 2, 2014

The members of IC Voicestream huddled together, taking deep breaths as a unit and humming an opening note. Heads bowed, feet planted on the stage, it was the group’s moment to shine in the semifinal round of the International Championship of Collegiate A Cappella.

IC Voicestream brought its talents to Rutgers University in New Brunswick, N.J., where it competed for the semifinal of the ICCA on March 29. Earlier that month, Voicestream placed second out of 10 regional a cappella groups at the ICCA quarterfinal competition in Syracuse, N.Y., which put the group through to the semifinals last weekend. After performing three songs in front of a panel of judges consisting of music educators, performers and experienced a cappella performers, the group did not qualify for the final competition in New York City.

Despite not advancing to finals, Voicestream had two members place in the quarterfinals. The group’s president, senior Drew Kellogg, received the award for Best Solo Overall for “Iscariot” by Walk the Moon, while senior Drew Zieff received Best Percussion for the entire set. John Vogan, a four-year Voicestream member, said it was very rewarding to have the group’s hard work recognized.

“That was just really special to have so many other people see what we’ve done,” Vogan said. “For our first time, to advance as far as we did was incredible.”

This was Voicestream’s first time performing in the ICCA since its founding in 2002. Prior to this competition, Voicestream primarily displayed its work at regional music conferences. Then, last semester, former music director Matt Bailey-Adams ’13 decided the group was ready to compete. The first time the group competed was last semester at the A Cappella Showdown at Turning Stone Resort and Casino in Verona, N.Y. The group used this experience as a practice for the spring ICCA competition.

Kellogg said he was hesitant about the idea of competing at first but soon changed his mind after hearing the vocal variety of the new year’s roster and subsequently realizing the group’s potential.

“It felt like the natural progression was to go compete, and not to compete so that we could win, or to say that we won,” Kellogg said. “It was so that we could go and put our music somewhere [so] that people who love a cappella could see it.”

With Bailey-Adams’ blessing, Voicestream took to its rehearsal room in the James J. Whalen Center for Music and recorded its set list. After, when the group sent in its audition video, it did not know what to expect, Vogan said.

“We were just going into it with a completely open mind … we were giving it a shot and seeing what came out of it,” Vogan said.

In both competitions, Voicestream had 12 minutes to show its talent. When competing, many groups will usually string together three of their strongest pieces. After viewing some of the previous champions, Voicestream decided the way to create a standout set list was to focus on the meaning behind the music.

“We had to find three songs that we thought described our group well, but that could also tell a story,” Kellogg said.

After much consideration, the group decided to perform “Iscariot,” “Home” and “You and I” by Lady Gaga. The first song, “Iscariot,” was a piece that focused on betrayal and sadness while “Home” centered on having a good time and letting the past go. Ending the set was “You and I,” a reconciliatory piece that symbolized moving on. These themes were meant to reflect the experiences of Voicestream and its members, which showed in the performance.

Junior Namarah McCall, co-music director for Voicestream, said the meaning behind the songs were important to the group.

Along with its success at competitions, Voicestream also has a CD coming out by the end of this year, covering music from Grace Potter and the Nocturnals, the Goo Goo Dolls and more. With a month left in the semester, the group is now planning to attend more conferences and workshops, including occasional competition in future semesters.

Looking back on the ICCA experience, Vogan said he was happy to end his four years of Voicestream on a high note.

“It’s not really about the competition, and it never really was,” he said. “I think it was a new outlet for us. But I definitely hope that when I come back as an alum I’ll see us continue to grow and maybe compete again.”