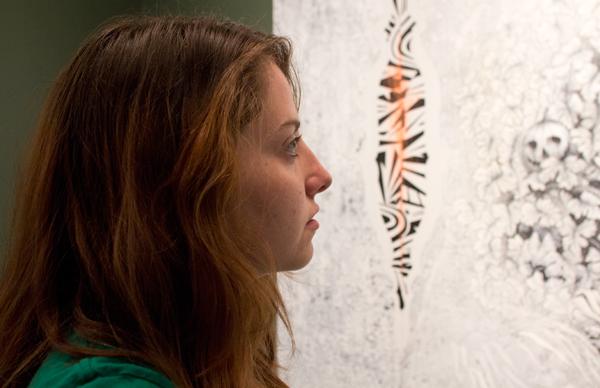 Shawn Steiner/The Ithacan
Junior Alex Halky looks at "Beautiful Wounds/Doubt" on Saturday at the Handwerker Gallery.
By Cady Lang — Staff Writer
Published: September 5, 2012
Shades of acid green and chartreuse overlap each other as shadowy splotches dot the surface of the artwork spanning a wall of the Handwerker Gallery at Ithaca College.

The colors of the exhibit slowly grow muted. Dusky pink and warm rusts fade into blacks, whites and grays, punctuated by the occasional pop of fluorescent orange. The images on the wall, most of them large scale and covering the entire wall space, are broodingly dark. Eerie prints peek out from hand-drawn images of children and exquisitely obscure silhouettes.

“re(Collection): memory and narrative in recent work” opened Aug. 29 at the Handwerker Gallery, its first show of the school year. The artist, Patricia Bellan-Gillen, is debuting four new pieces in the exhibition, in addition to showing older pieces.

Bellan-Gillen often produces pieces large in scale like the ones featured in the exhibit. Despite their size, Bellan-Gillen pays great attention to detailing her work and creating a visually pleasing experience for her viewers.

According to Bellan-Gillen, the mix of new and old is intentional, showing the evolution and relation of the works to each other throughout the years. The exhibit is centered on the personal aspect of memory and recollection, with a touch of the macabre.

“The overriding or umbrella theme of most of the work in the show is based on stories or bits and pieces of stories — historical stories,” Bellan-Gillen said.

The historical theme Bellan-Gillen describes is reflected in her pieces. For example, the silhouette of Alice in Wonderland complements the visual recollection of the biblical story of Lot’s wife. Images are “ones that you’re familiar with; they’re mixtures of personal stories of my own,”  Bellan-Gillen said. “The work is kind of a confluence of bits and pieces of stories and how stories overlap or remind one another.”

Viewers are encouraged to draw on their personal experiences while engaging with the evocative pieces.

Bellan-Gillen, however, cautions viewers against trying to label the exhibit with one superlative, overarching theme.

“They’re not about me trying to get one big message out,” Bellan-Gillen said.  “They’re about trying to have something to give the viewer, this moment of recognizing their own memory or their own knowledge and their own personal stories, recalling what we maybe don’t even know is there.”

The number of pieces being shown further the personal aspect of the exhibit. While most exhibits at the Handwerker Gallery have about 60 pieces, this exhibit features 12. Gallery Director Mara Baldwin said the exhibit reexamines the use and perception of space for the gallery.

“As the director of the gallery now, I think that’s really interesting to change the way that the space is being used, to have larger works that really show how an idea can be brought to full resolution and full capacity,” Baldwin said. “A drawing that’s the size of a wall — there’s something about that that’s interesting in the making standpoint; it’s nice to have work that takes the space into consideration with its making and its presentation.”

Bellan-Gillen experienced the unexpected appearance of subconscious memory while creating one of the large-scale paintings in the exhibit, “Beautiful Wounds/Doubt (2012).” The huge black-and-white piece features detailed print work, an overwhelmingly lush landscape and a drawing of a small girl hiding in the plant life, jabbing a finger at a television.

“[The piece was] biographical without my really thinking about it ahead of time,” Bellan-Gillen said.

She said imagery reflected the feelings she had about the Marcellus shale drilling near her home. As Bellan-Gillen intended, the striking appearance of the neon orange paint shocks the senses.

“I didn’t really think about it when I began the piece, but it takes on my feelings about the drilling,” Bellan-Gillen said. “Primarily, there’s a big orange gash in a painted framed area on it and after I did it, I realized that it relates to all of the orange, fluorescent orange ribbons that are tied throughout the landscape here to denote where they are going to do the testing. They’re sort of like wounds.”

Sophomore Ken Robertson, a gallery monitor, said he looks forward to his own recollection of the pieces after viewing the exhibit.

“Most students come in to see the work once or twice, but I will be looking at it until mid-October,” Robertson said. “I may not have a better interpretation of the artist’s intention than someone that sees them once, but experiencing them under different conditions at different times should result in an altered mental perception of the space.”

Baldwin said she hopes students will not only draw on their own memories for this exhibit, but also receive inspiration.

“I hope that when students look at this exhibit, who are making work, that an idea that is manifested can also be done again in another way,” Baldwin said. “When you recollect or experience memory or something that happened before, you experience it in a different way.”

An opening reception for “(re)Collection: memory and narrative in recent work” will take place at 5 p.m. Thursday at the Handwerker Gallery.