A steady rock beat thumps from the belly of DeWitt Middle School. A steady two-and-four rhythm creeps past the trophy case and the auditorium, coming from the home economics room after school Nov. 18. Near the ovens, Samba Sowe and Malama Sokoni, both 11 years old, sit in concentration, tapping out the steady beats on their drum pads. One pad is tilted to serve as a cymbal, and the boys’ feet tap an imaginary bass. Terrence Flanigan, 38, smiles widely as he accompanies the boys on his own drum pads. 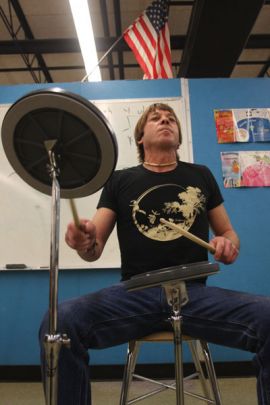 “We basically play a lot of things we can find a two-and-four in,” Flanigan, an Ithaca College facilities attendant, says as he sets up the next song. “A drummer’s job in rock ‘n’ roll and blues or anything is the strong two-and-four in it.”

Flanigan would know. In addition to teaching students how to play drums after school at DeWitt and Boynton middle schools, he teaches private lessons, plays drums in Cheyenne Band — the band he founded and named for his late son — and also takes classes in music and anthropology at the college. The classes are free because of his job as a facilities attendant in Hood Hall and the Garden Apartments at the college.

Flanigan said taking classes free of tuition is a perk of his job that not everyone takes advantage of, and he appreciates the ability to work an anthropology major into his music- and work-filled schedule. He does admit he is in no rush to complete the major, however. Like one of his beloved drum solos, he wants to relish his classes and take his time to make them as enjoyable and meaningful as he can.

“I’m a nontraditional student,” Flanigan said. “I enjoy participating in class. I look forward to writing the papers and doing the readings and talking in class. Education is one of my main goals.”

His passion for learning is evident in his voluntary music education, too. Flanigan started working at the middle schools a year ago when two of his drum students — one from DeWitt Middle School, the other from Boynton Middle School — mentioned the after-school programs were in need of teachers. He said his practices start with a few simple drum exercises and rudiments, and then the students move on to the songs.

“I let them warm up a bit, give them a couple minutes to get frustrations out,” he said. “The last thing you want to do is go to another class at the end of the day. It’s all about fun.”

As they set up their drum pads and twirl their sticks, Sowe and Sokoni seem passionate about music and education as well. Both regularly attend Flanigan’s classes at DeWitt Middle School and take private lessons from him after school. Sowe said his favorite part of the class was learning the beats of the songs, and Sokoni agrees.

“I want to get a drum set,” Sokoni said, drumming steadily with a smile. “I’m taking drum lessons so I can get better.”

As the students become more experienced with the drums, they play more and more complex beats from songs Flanigan plays on the stereo. Starting with classic blues and rock, like Sowe’s favorite “Good Golly, Miss Molly,” Flanigan said maybe by the end of the year they will move on to more difficult songs with triplet beats, like Led Zeppelin classics.

It is not just students who learn from Flanigan. Ajit Tete, an after-school program assistant at DeWitt Middle School, is also learning the drums from him, keeping in rhythm with Sokoni and Sowe at the practice and pleading for just one more song before the jam session ends. As Flanigan counts his students off to start the next set, Tete says Flanigan’s teaching style and drumming skill are infectious.

“He’s so full of energy,” Tete said. “He just keeps it moving. I couldn’t stop playing.”

Flanigan’s supervisor at the college, Michael Yaeger said he sees the same enthusiasm and life in Flanigan behind his drum set or around the halls of Hood.

“His energy level is amazing,” Yaeger said. “I really like him. I’m glad he’s here.”

“I always wondered what cleaning people did besides cleaning,” she said. “I didn’t know exactly what he did. … The fact that he’s taking classes is pretty admirable.”

Flanigan said in addition to seeing the passion his students have for music, he enjoys the positive social implications that drumming has. He said drumming promotes a tolerance that other classes and activities cannot provide, since coming together as a band teaches students to put aside differences and work together for one harmonic sound — a crucial skill for drummers to possess.

“The most important rule we have is to stay together,” Flanigan said. “We are one drummer.”