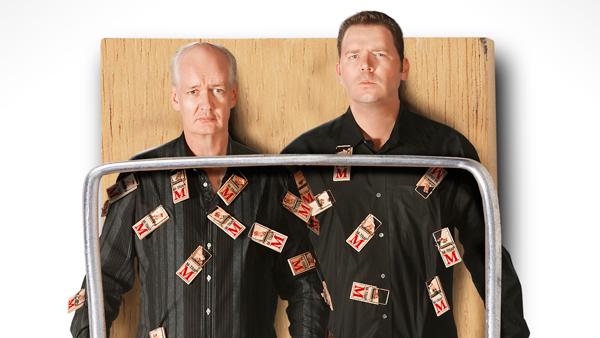 Courtesy of Carolyn Ambrose
Colin Mochrie and Brad Sherwood, former “Whose Line It Is Anyway?” cast members, are touring for their eighth year. They will be performing a comedy show Friday at the State Theatre.
By Megan Renner — Contributing Writer
Published: September 12, 2012

Colin Mochrie and Brad Sherwood from the comedy show “Whose Line Is It Anyway?” have been touring as a duo for eight years. They have thrown routine out the window, relying entirely on improvisation and the ability to think fast. Their experience has brought them to center stage, performing in front of live audiences from around the world.

Contributing Writer Megan Renner talked to both comedians about life after “Whose Line Is It Anyway?” their friendship and their individual plans for the future.

Megan Renner: How would you describe your experience at “Whose Line Is It Anyway?”

Brad Sherwood: It was one of the most fun, professional television show gigs I’ve ever had. Basically, we’d show up, make up a bunch of silly stuff and get people to laugh.

Colin Mochrie: It was a game changer for me. It was probably the most fun experience I’ve had up until now, and all of the guys were great to work with.

MR: What have you been doing since you left the show?

BS: Colin and I have been doing a two-man tour for about eight years now. I’ve always hosted pilots for different shows, like different science shows or for the Discovery Channel.

MR: Have you been working on any independent projects?

CM: I just finished writing a book that will come out this year before Christmas break. I never wanted to write because it seemed like a lot of work; part of the reason I got into improv is because I’m lazy. But my agent ended up getting me the book deal, and I said, “I guess I better write something.”

MR: Can you give us a preview of what the book is about?

CM: I tried to write it in sort of an improv way. There is a game called “First Line/Last Line” where you get the first and last lines of a scene from the audience. The book consists entirely of short stories that begin and end with lines from famous novels. Each story just has a completely different middle.

MR: Where did the idea for your two-man comedy tour come from?

BS: We were doing live shows in Vegas, which were a lot of fun, but you spent a lot of time sitting and waiting for your turn to say something. I had been out on the road with a friend of mine doing a two-man show. It was a lot of fun, so I approached Colin and said, “What do you think about the two of us giving this a try?” That was eight years ago, and we never stopped.

MR: How did you choose Brad Sherwood as your partner?

CM: He really needed the work, so I took pity on him. Brad and I have been working together for over 20 years now, so I feel really safe with him on stage. I know it’s always going to work out even if I’m not on top of everything. Brad will be there for me.

MR: Can you predict what the show at the State Theatre will be like?

BS: It’s basically like we show up, hand the car keys to the audience and tell them to drive us where they want to go. We never know what to expect, and it’s always different, but we do always know it’s going to be funny.