Senior Jason Sheridan and junior Mark Hejduk have a great task ahead of them. As co-presidents of the IC Comedy Club, they are busy preparing the other actors for the annual spring comedy performance, this year titled “The Circle of Life.” They hope they can live up to high expectations created by past performances, such as “Ithaca College: The Show” and “The Penis Soliloquies.” Contributing Writer Danielle Paccione spoke with Sheridan and Hejduk about the show’s title, what audiences should expect and why Hejduk is no longer sacrificing livestock. 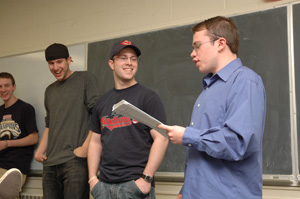 Danielle Paccione: Where did the name for the show, “The Circle of Life,” come from?

Mark Hejduk: A fellow officer had this idea for a show about the different stages of life, and, for some reason, he said there was a vision for a large musical number resembling “The Lion King.” So essentially, he just coined the phrase “The Circle of Life.” And even though there is no giant musical number, we stuck with the name.

Jason Sheridan: We hope the show is very successful but not successful enough where they will sue us.

DP: What does the show consist of?

MH: Without our horrible childhood, we wouldn’t be running the IC Comedy Club. We just go on what we know. We can’t talk about happy days on the playground. That’s why we talk about things dying.

DP: Are you trying anything different or new in this show?

JS: Yes, we’re trying to be funny this year. In the past we have tried and failed … which the Ithaca College LiveJournal community has told me many times before, for past show advertisements. How much we “suxc” and assorted things.

MH: This year, it’s more of a generic topic. We relied less on inside jokes and common observances and more on just experiences outside the box.

JS: This year we just go from sketch to sketch. It might work well or may go down in flames.

DP: Do you have any rituals before going onstage?

MH: It comes from a baseball locker room–type perspective. I like to sacrifice a live chicken and eat it. That didn’t go over too well in high school, so we had to start getting KFC.

JS: I cry and usually punch a wall for a half hour before the show. I spend most of the club meetings yelling profanities at club members — but they love it, they smile. This is top of the pops.

DP: What can we expect in the show?

MH: This is probably the best new class that we’ve had in three years. Each comedy club has had its generation in types of humor. You can expect many laughs though, a lot of relatable experiences and hopefully a glimpse towards the future.

“The Circle of Life” will be performed at 7 p.m. tomorrow and Wednesday in Emerson Suites. Tickets are $5 at the door, $3 in advance.