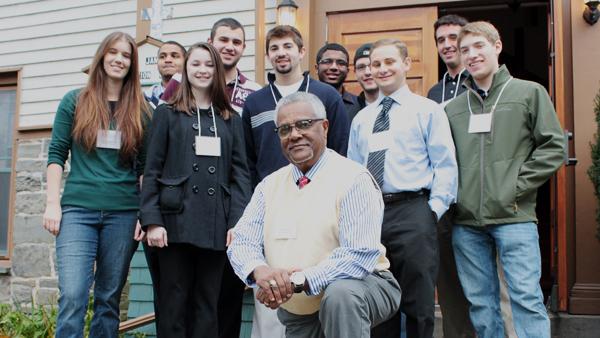 Amelia Marino/The Ithacan
Gossa Tsegaye, assistant professor of television-radio, organized a reenactment of Frederick Douglass' speech at the St. James African Methodist Episcopal Zion Church in collaboration with The History Center in Tompkins County and Roy H. Park School of Communications. Tsegaye is also producing a film of the re-enactment with the help of Ithaca College students that will communicate the importance of the speech for future generations.
By Karly Placek — Staff Writer
Published: October 21, 2012

The year is 1852. A man travels to Ithaca, N.Y., to deliver a speech about the evils of slavery. He speaks of political injustice, the failure of the two-party system and the necessity of uniting a nation. Addressing the Whig party directly about their flaws, this man’s words are brash yet eloquent, urgent yet poetic. This man is Frederick Douglass.

One hundred and sixty years have passed, and Gossa Tsegaye, assistant professor of television-radio at Ithaca College, believed the same speech should be heard through re-enactment. Though the audience is of a different generation, he hoped Frederick Douglass’ words would still resonate.

“The Spirit of Freedom and Progress in Tompkins: A Dramatic Reading of Frederick Douglass” took place at 1 p.m. Oct. 20 at St. James AME Zion Church in downtown Ithaca.

The re-enactment was the result of a collaboration between The History Center in Tompkins County, the Roy H. Park School of Communications and St. James AME Zion Church with funding from the Park Foundation.

Tsegaye had the idea for the re-enactment while reading a book of Douglass’ speeches.

“I came across a speech [Douglass] gave in Ithaca, and I said to myself, ‘Someday, when I get a moment, I’ll try to produce this thing live,” Tsegaye said. “Now that’s what we’re doing.”

“[Tsegaye] was so taken by the message of the speech,” Callan said. “There are so many themes touched on in the speech that are applicable today, especially in the midst of a political campaign. We immediately knew we should do something, even on The History Center stage.”

After brainstorming, Tsegaye and Callan decided the most historically accurate venue for the event would be the St. James AME Zion Church. The church, which is nearly 180 years old, is where Douglass delivered his speech.

“In the middle of the summer, we talked to the folks at the St. James Zion Church and they seemed very interested in partnering with us,” Callan said. “After that partnership, the whole thing picked up speed.”

The re-enactment was as historically accurate as possible. Music played as actor David Anderson of Rochester walked to the podium. The speech was 25 to 30 minutes in length, and a reception followed, where the audience spoke informally with Anderson and the organizers.

“This is a time to bring the community together and recognize the importance of a giant that came through here at one time and delivered a very important speech,” Tsegaye said.

In addition to the re-enactment, Tsegaye is producing a film to communicate the importance of the speech long after the event ends.

During the beginning of the semester, Tsegaye approached some of his television-radio students to be a part of a film crew to record the event.

“The video can be used for further discussions and teachings in the school systems,” Tsegaye said. “We also want to give it to libraries and historical societies for further use by scholars.”

Sophomore Matt Kempner, who filmed the event, said he was enticed by the idea of being a part of a historical re-enactment.

“The fact that this speech occurred right here in Ithaca gives us the perfect opportunity to recreate and capture that moment in history,” Kempner said.

While Anderson was the one who spoke, his words were the same as Douglass’ nearly two centuries ago. Callan hoped today’s society still found meaning in the speech.

“Douglass speaks of the need to take hard and sometimes unpopular stands because it’s the right thing to do,” Callan said. “This was said 160 years ago, and we can still apply it today. I really hope that people can gain some of the understandings and parallels between 1852 and 2012.”

Though Douglass’ speech is an important part of Ithaca’s history, Tsegaye said, it didn’t have to take place in Ithaca in order to be special.