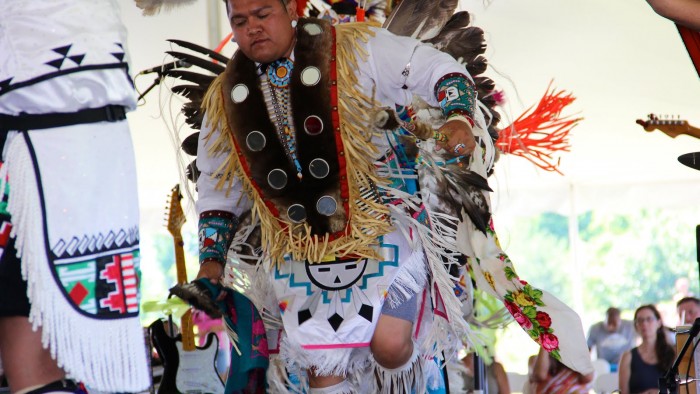 Courtesy of Paige Bethmann
Brenner Fontanelle of the Zuni-Pueblo nation dances at the Native American Music Festival at Ganondagon in Victor, N.Y., over the summer.
By Lauren Mazzo — Staff Writer
Published: October 31, 2012

The department of anthropology, the Native American Studies program and the Office of Student Engagement and Multicultural Affairs are hosting six events during the month of November to highlight different aspects of local Haudenosaunee culture. The Haudenosaunee includes six nations who resided in upstate New York — the Seneca, Oneida, Mohawk, Tuscarora, Onondaga and Cayuga, which is located closest to Ithaca.

The month’s events will begin with a student panel discussing Native American identity at 7 p.m. Thursday in Klingenstein Lounge. The panel will be monitored by Hollie Kulago, who was a predoctoral fellow at the college before taking a position at Elmira College.

The student panel has consistently been part of the annual celebration, because it gives students the opportunity to share their experiences as Native American students on campus.

“When we think about Native Americans, it’s usually a static image that people have in their mind, but as the students have stated at previous panels, it’s a really complex thing with a lot of frustration, pride and sometimes confusion that affects them especially on campus,” Kulago said.

Sophomore Paige Bethmann, a Native American student who will be part of the panel, said she’s excited to raise cultural awareness around campus.

“I thought it was time to take initiative and take the reins of the program here, because there aren’t very many Native American students,” Bethmann said.

The 14 Native American students on campus make up less than one percent of the student body, according to the Office of Institutional Research.

Anthropology professor Jack Rossen said the highlight of the month is the Native American Social Dance at 7 p.m. Nov. 8 in Emerson Suites, which hasn’t been part of the celebration in six or seven years. Allegheny dancers will teach attendees how to do traditional dances and Chief Jake Edwards from the Onondaga Nation will speak about the Two Row Wampum Campaign, which honors the 400th anniversary of a treaty between the Haudenosaunee native people and the Dutch. The treaty belt from the Two Row Wampum has two purple rows of beads on a white background. One row represents the Europeans on their ship, while the other represents the native people and their canoe, sailing down the river of life, never interfering with each other.

“We’re revitalizing the concept and the idea of it, because this is the concept that the Haudenosaunee presented to all people they met, that we can live with you side by side,” Rossen said.

Senior Andrew Thomson will be doing a presentation at 7:30 p.m. Nov. 11 in Robert A. Iger Lecture Hall about the cultural survival of the James Bay Cree people, with whom he spent a summer living and working with in Canada.

A Mohawk speaker, Amber Meadow Adams, who is working with the language revitalization of the Mohawk people, will present at 12:10 p.m. Nov. 27 in Clark Lounge. This theme continues to the next night’s event, a screening of the film “We Still Live Here,” which follows the reconstruction of the lost language of the Wampanoags in Massachusetts at 7 p.m. in Textor 102.

The final event is a session of traditional Haudenosaunee storytelling by Barbara Bethmann Mahooty, a Mohawk woman and Bethmann’s grandmother. Mahooty will speak from 4 p.m. to 5 p.m. Nov. 29 in Klingenstein Lounge.

Rossen said it’s important that the month’s events raise awareness on campus because of the close proximity of Ithaca to local Native Americans.

“It’s important to remember that we are in the Cayuga homeland, that we live on native land and that native people are still here, that they have not disappeared,” Rossen said.