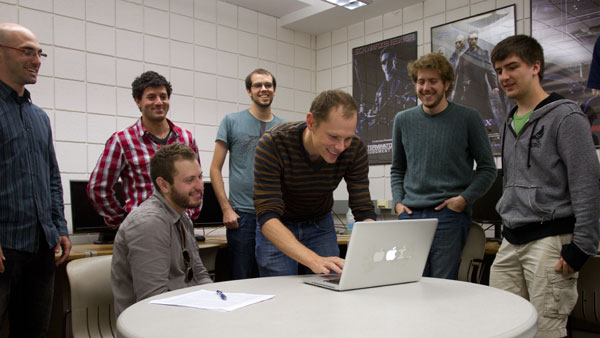 Any avid Internet radio users can open up their Web browser and instantly have access to thousands of mainstream artists and songs. However, users on MegsRadio will supplement their listening experience with local music — contrary to other stations such as Pandora.

Turnbull said he has been playing music since he was a kid, which fostered his interest in local music. Turnbull said his disappointment in not being able to find local music during college drove his desire to create a station for local music, so he began working on a prototype in the summer of 2008. He dubbed the project MegsRadio, named after his wife, Meg.

Before he began working on MegsRadio, Turnbull approached each student for their skills in computer science. Spirgel said he joined the team after the first semester of his freshman year. Spirgel was able to give feedback on the layout of the site because of his experience in Web design.

“It was very barebones, and not visually appealing, not laid out in a convenient manner and didn’t adhere to conventions,” Spirgel said. “I helped to color and reorganize the layout.”

MegsRadio differentiates itself from other Internet radio stations because it’s ad-free and a nonprofit, relying on grants for funding. MegsRadio’s mission is to promote the work of local artists by contextualizing their music with songs by more well-known artists.

This contrasts with Pandora Radio, which aims to gain a profit by making users listen to advertisements every few songs unless they pay for ad-free accounts. Turnbull said he is not impressed with Pandora, because it’s listening recommendations are “too safe.”

“We have really three things Pandora doesn’t have,” Turnbull said. “We have the local focus, we have the ability to have a lot more control over the station and … we tie the whole listening experience in with songs you like and songs you’ve listened to.”

In addition to playing local music, MegsRadio includes upcoming concert and event dates for the artist whose song is playing, which are displayed in a banner above the song. There is also an events tab, which displays a map of Ithaca, and a sidebar featuring more local shows and their locations.

Sophomore Tim Rousseau said, while he had some difficulties using the site on his browser — MegsRadio cannot be used on Internet Explorer or Safari — he was still able to enjoy it.

“This put Pandora above it in my mind, because Pandora works on more platforms,” Rousseau said. “However, I then saw the ‘events’ tab, and that clinched it.”

Turnbull said the team is planning to fix the issue of the browsers, but it is a low priority considering Safari users make up only 4 percent of the browser market, and Internet Explorer makes up only 12 percent.

Turnbull said both the college and Cornell University received a grant from the National Science Foundation around May 2012 to fund MegsRadio. Turnbull said the leftover funds allowed more people to work on the site over the summer of 2013 and gave them a budget to use toward expansion.

Turnbull said the team is planning to expand MegsRadio to other communities such as Buffalo and Syracuse, but said their ultimate goal for the following year would be to release a smartphone app featuring the same concepts.

Turnbull said his desire is for the website to remain a platform for sharing local music and connecting with the community.

“Ithaca in particular is very progressive in terms of the local-everything movement, and I think we’re trying to enhance that in music, too,” he said.