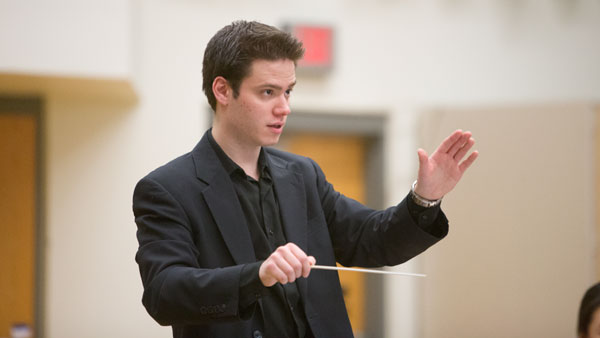 In October 2012, senior Joshua Condon was driving from Boston back to Ithaca, N.Y., with friends, when one them popped in a mix CD of Disney music. As Condon listened to the familiar tunes, he imagined the Ithaca College Symphony Orchestra performing them.

“I was thinking about some of my friends … and I was thinking, ‘Oh my gosh, they almost could sing just as good, if not better, than these orginal soundtracks,” Condon said.

He pitched the idea of a Disney-themed concert while driving in the car with his friends, excited by the idea of bringing the magic to the college, Condon said.

“It occurred to me ever since I was here as a freshman that students here really love Disney music,” Condon said. “A lot of people had gotten into music or the desire to study music and got excited about music through listening to a lot of Disney as a child.”

More than a year after that car ride, Condon is the artistic director of “Disney in Concert: Tale as Old as Time,” a one-night-only concert opening at 8 p.m. Feb. 15 in Ford Hall in the James J. Whalen Center for Music. The concert features a full orchestra and choir of students and faculty as well as the VoICes Multicultural Chorus. Condon said he held open auditions in December to find all the performers, and the group has been rehearsing for the past three months.

Condon said he wanted to do a final project for his senior year, and he thought a Disney concert would be a fun change of pace from the classical repertoire he and his fellow music students are used to performing.

“I knew that, for a senior project, I wanted to do something kind of big,” Condon said. “I knew I wanted to incorporate a lot of musicians. And then in hearing that CD on the car ride back, I thought, ‘What’s stopping us from doing something like this?’”

Condon said he took a cue from Walt Disney himself, who said, “The way to get started is to quit talking and start doing.” He researched Disney shows and came across “Tale as Old as Time,” which is a 90-minute concert the Disney Concert Library rents to symphony orchestras.

According to the Disney Concert Library website, the show was created by Ted Ricketts of Symphony Pops Music in collaboration with Disney Concerts. The score includes music from classics such as “Snow White and the Seven Dwarfs” and “Cinderella,” films of the 1990s Disney Renaissance like “Beauty and Beast” and “Aladdin” and even recent successes such as “Enchanted.”

To help make the production happen, Condon said, he launched an Indiegogo.com campaign last summer, which raised $3,000 toward the down payment for the performance rights and a base marketing budget. He was also able to save money by giving only one performance, which sold out Feb. 6.

The production will also feature a special video message from Bob Iger ’73, CEO of the Walt Disney Company. Condon said one of the production’s marketing directors, sophomore Kristine Tsui, made the arrangements for Iger’s video message with the help of Diane Gayeski, dean of the Roy H. Park School of Communications.

“I had the chief global marketing director of the Walt Disney Company call me on my cellphone the other day to kind of talk about the details,” Condon said.

During the production, Condon plays multiple roles: director, conductor, pianist, synthesizer player and soloist, singing the part of Zazu in “I Just Can’t Wait to Be King” from his favorite Disney film, “The Lion King.” For some of the pieces, he passes off the conductor’s baton to seniors Michael Samson, conductor of the Ithaca College Gamer Symphony Orchestra, and Ben Van de Water, conductor of Ithacapella, who both joined the project last spring.

Van de Water, a double major in music composition and theory, said he originally wanted to help arrange a piece for the concert, but because the concert score was already written and the rights would not be available for a new composition, he became a conductor.

“We got all the scores in the mail,” Van de Water said. “We got them all out, looked them over, and said, ‘All right, Josh, you get first pick,’ and then Michael Samson and I rock-paper-scissored for second pick, and then we just went round-robin choosing who does which scores.”

Van de Water said “Fantasmic,” a suite — or a set of pieces that flow together — based on the popular live show at Walt Disney World and Disneyland, is his favorite piece to conduct.

“It’s simple in such a way that it just allows you to kind of flow with it and feel the music,” Van de Water said.

The two-act concert is divided up into medleys. Some are suites from specific films, such as “Mulan” and “Pirates of the Caribbean,” while others are classified by theme, such as “True Love Conquers All,” which includes Disney love songs “Bella Notte” and “Beauty and the Beast.” The medleys feature both student and faculty soloists.

Susan Avery, associate professor of music education, said she has not seen Disney’s “The Little Mermaid” before Condon and Van de Water asked her to sing “Poor Unfortunate Souls” in the villains’ medley. Avery’s dramatic belting voice and demonic cackle at the end of her solo drew applause from the students in the choir and orchestra at one recent rehearsal.

Avery said much of her inspiration for the conniving sea witch Ursula came from Pat Carroll, the original voice actress for the 1989 film, and she added her own observations as a first-time viewer of the fim.

“It’s much more fun to be a villain,” Avery said. “If you’re going to be asked to do something like this, they couldn’t have thrown anything more fun at me.”

Condon said the timelessness and popularity of Disney films goes beyond the stereotypical themes of true love and magic.

“Everybody in life at some point has some sort of vision of their life, to find some sort of fulfilment,” Condon said. “The journey in that is kind of always represented in every Disney movie, so much so that it captures a basic human experience and need.”