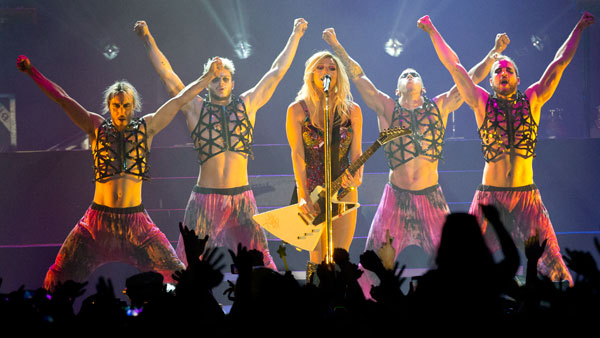 It is safe to say that Ke$ha put on one crazy, beautiful show Sept. 28 at Cornell’s Barton Hall. The 2 1/2 hour performance was spectacular, featuring the pop star’s eccentric outfits, wild dance moves and powerful voice. The audience was a packed mosh pit, and Ke$ha’s vocals were breathtaking. Her emotions were raw, and the amount of energy she and her crew had on stage was contagious.

Even before the singer emerged from backstage, the crowd was full of energy and excitement. Ke$ha fans poured glitter onto one another while others wore metallic face paint. Some people had on eye-catching outfits, like one attendee who was wearing a purple cape, a blinking, gold, dollar-sign necklace, a winter hat with cat ears and a cheetah scarf.

A booming bass line shook the entire theater as the opening act, rapper T. Mills, swaggered onto the stage. His track “Right Song” was slow, and he rapped languorously over the loud drums and blaring synthesizer. Though he was a talented rapper, his cocky attitude and his repeated yelling of “get your f—ing hands up” was unnecessary and irritating.

After the opener, it took about 20 minutes for Ke$ha to finally come onstage. Fog machines turned on, a guitarist and keyboardist began to play and the outline of Ke$ha became visible through the thick haze. Everyone began jumping up and down as the tune of “We R Who We R” played. The song was a fantastic choice as an opener with upbeat and relatable lyrics like, “Tonight, we’re going hard/ Just like the world is ours/ We’re tearing it apart/ You know we’re superstars, we are who we are.” Ke$ha’s full and energetic voice was compelling in this song, putting to rest any rumors that she is terrible live.

Ke$ha has always been depicted as just the “dirty wild child,” but judging by her dedicated performance, this is simply not true. Of course, because it’s Ke$ha, her wardrobe was fun and exotic. Though she stayed in the same pair of knee-high black leather boots for the entirety of the concert, she changed her outfit four times. The costumes were fierce, skimpy, bedazzled onesies that were flattering and outrageous.

The next crowd-pleaser was “Gold Trans Am,” which was full of energy and excitement. While the message was scandalous, the audience grooved to the heavy drum beat and rock ’n’ roll guitar riffs. She creatively used a drill and a gold safety belt around her waist to create sparks, adding to the pyrotechnics that were shooting up on stage.

The album’s title song, “Warrior,” where Ke$ha played the drums, was well received by the audience. “Take It Off,” a song with an energized beat, blew the crowd away as fake dollar bills shot out of T-shirt cannons in the middle of the performance, putting the audience in the strip-club setting. Ke$ha also tossed money at her male dancers, who were in women’s strip clothes promiscuously dancing on stripper poles, adding to the song’s raunchy tone. Her backup dancers made the concert even wilder with their synchronized twerking and choreographed routines.

The performance of “Tik Tok,” one of Ke$ha’s classics, was fantastic vocally; it was also clever and comical, with four dancers dressed in tiger, chicken, rabbit and beaver costumes that played off of her endearing pet name for her fans — “animals.”

The best song performed was “The Harold Song.” Techno beats and a jumpy keyboard played repetitively throughout the song, with the guitar and drums staying quiet to make room for Ke$ha’s emotional, vulnerable vocals. It was obvious that even though she had performed this ballad multiple times, it is still one of her most impassioned songs.