Split into teams of two and three and armed with clipboards, surveys and camera equipment, students hit the streets of Ithaca to determine “Ithaca’s Most Wanted Documentary.” 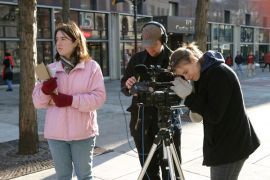 “I do documentary, I do nonfiction and everywhere I go people are always saying, ‘You know what you should make a documentary about?’” said Meg Jamieson, assistant professor of cinema, photography and media arts. “So I feel like everyone’s got one in their mind.”

So Jamieson came up with the idea for “Film in the Blank,” a project that would make a documentary based on what people say they most want to see. The idea was inspired by Vitaly Komar and Alexander Melamid, visual artists who created “Ithaca’s Most Wanted Painting” in 1993. The duo then expanded their artistic study of desires to countries around the world.

Though the idea to translate Komar’s and Melamid’s concept into the realm of documentary has been on Jamieson’s agenda for a while, the idea to turn the process into a class struck her two years ago.

Steven Skopik, professor and chair of cinema, photography and media arts, said practicum courses — which are offered irregularly — give students a chance to work with faculty in a different capacity than traditional student-teacher interactions.

So far during the semester, the nine- student class has focused on developing a survey, accumulating population statistics and setting up databases and the film’s Web site, www.filmintheblank.org. The group, unsatisfied with bland census statistics, decided to compile its own take on the Ithaca population by focusing on people who use public spaces.

“What we’re really doing is defining the population as people who use public spaces, because we see that that’s sort of what holds a community together,” Jamieson said.

Senior Meghan Damelio said she has been out around town four or five times filming surveys for the film’s trailer. In addition to fulfilling her major requirements, Damelio said she is excited by the innovative concept behind the film.

“I’m excited to meet people in the community,” she said. “I like the idea of the project in general.”

Through public surveys — which can also be taken on the Web site — Jamieson hopes to determine not only what most Ithacans want to watch a documentary about, but also what they want from a documentary.

Jamieson is interested in how a person’s hometown influences who they are. She said she considers the U.S. as more of a series of different regions than as one unified country and hopes to reflect those differences with this project.

“There is something specific about where you are from that shapes what it is you hope for,” she said.

In addition to producing a documentary on animals, history, the natural world, people, or the science industry and technology, Jamieson hopes the film and the surveying process will get people thinking.

“Almost in a way [“Film in the Blank” is] more about the questions it raises,” she said. “This project is half about getting people to have a conversation about it.”

Skopik said he is intrigued by Jamieson’s larger concept, though he is not involved in the practicum.

“It’s not really about what one’s going to see as the final project, but about how people think about that, which is … kind of a risky thing to take on. You don’t know what the end product is,” he said.

The class’ timeline has experienced several hiccups, and the launching of the Web site has been delayed several weeks. Jamieson said she is holding out hope that the documentary will begin filming before the semester ends.

Damelio said delays are understandable because the idea of making a documentary based on people’s desires is difficult.

“I [try] to take it one day at a time just because of the scope of the project,” she said. “It’s pretty big, and a it’s a gamble definitely because it’s abstract. We don’t really have the topic to the documentary because we’re getting it from other people.”

So far, a film about people is leading the survey, Jamieson said. She said she personally would like to make a documentary about animals but acknowledges that she’s not the norm.

“People like to look at people,” she said. “Very few people pick anything else.”