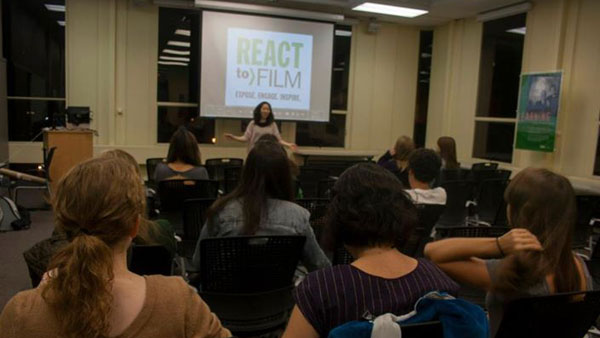 Courtesy of Jackie Northacker
REACT to FILM hosts a special screening of “The Invisible War” for students at Tufts University. Senior Caroline Podraza plans to lead a chapter of REACT to FILM at Ithaca College to discuss social justice issues with the campus community.
By Kristin Leffler — Contributing Writer
Published: September 2, 2013

For senior documentary studies and production major Caroline Podraza, the film “Love Free or Die,” which follows the first openly gay bishop in New Hampshire, confirmed her belief in the importance of documentary films. Now, she is working to bring social justice documentaries to Ithaca College’s campus this fall.

“That was one of the movies that gave me an idea of the power of documentary and the power of individuals themselves to overcome obstacles and persevere,” she said. “I wanted to have an organized way to bring documentaries and discussion and action to Ithaca.”

Podraza will lead an Ithaca College chapter of REACT to FILM, a nonprofit organization that hosts documentary screenings on high school and college campuses in the U.S. and encourages students to take action on the social justice issues portrayed in the films.

Podraza learned about REACT to FILM through her internship this summer at Isotope Films in New York City. Currently, 50 other colleges and universities across the U.S. actively participate in REACT to FILM’s College Action Network. College chapter leaders like Podraza garner campus-wide support for a designated documentary twice a semester by organizing a screening as well as a Q&A session with the film director or a larger panel discussion.

As Podraza builds Ithaca’s chapter by recruiting students through Facebook, she said she has already received some responses from students looking to get involved in the group’s early stages.

Junior Karly Placek, a documentary studies and production major, said the combination of action and education that REACT to FILM utilizes got her attention.

“When screenings of important films regarding social, political or environmental issues are held without any following discussion and audience involvement, it’s hard to promote action or solutions,” she said. “REACT to FILM not only encourages students to learn more about critical issues, but to talk about them and do something.”

REACT to FILM’s operations manager, Jackie Northacker, said students across the country simultaneously watch the films, generating conversation about the same issue and a national moment of passionate response.

“Civic engagement is huge, that’s our big thing,” she said. “We’ve had such an incredible response. Students are reacting to our films. We want people to react and do something and not do slacktivism. That’s not what activism is.”

The immediacy and large support system of REACT to FILM provides students with resources on how to take appropriate action. Northacker said after students from Temple University watched “The Interrupters,” they encouraged others to sign a petition asking Philadelphia’s mayor to declare gun violence a public health emergency. They also gave audience members information on how to get involved with Philadelphia CeaseFire, a national movement advocating a stop to gun violence.

Northacker also said REACT to FILM stays closely connected to the documentary world with its board of directors, film advisory board and education advisory board.

“We are constantly scouting for films,” she said. “We go off advice of film advisers and what social topics are really relevant today.”

In the past, REACT to FILM has screened documentaries such as “Searching for Sugar Man,” “How to Make Money Selling Drugs” and “The Invisible War.” Though the documentary choices are not yet finalized for the upcoming year, Northacker said the films could cover themes such as immigration, drugs and feminism.

Podraza said she hopes to engage students and faculty from all fields of study, as well as community members, in the screenings and, most importantly, the activism. She also said she has plans to involve other campus organizations concerned with social justice issues.

“I’m hoping to get representation from all clubs on campus and try to garner their support and generate interest,” Podraza said. “People may not know how to act. They want to, but they don’t know what steps to take, and REACT to FILM gives them some direction.”

As more and more schools get involved, Northacker said she can’t help but be in awe of the movement.

“We are on the brink of something amazing here,” she said.