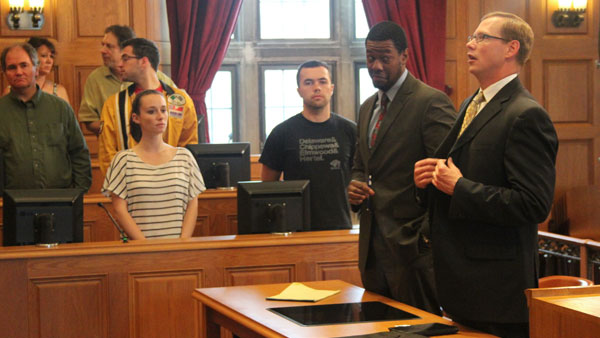 Courtesy of Knob on Trial
Ithaca College students, faculty and Ithaca residents act out the trail of the golden doorknob in senior Ben Ratner’s Web series, “The Murder Trial of the Golden Doorknob.” The series puts a twist on the annual Golden Doorknob Awards.
By Samantha Guter — Contributing Writer
Published: December 11, 2013

Lights up. A courtroom fills the screen. It looks like an average trial, but this is much more serious. This is a special case: the infamous golden doorknob of the Golden Doorknob Awards is on trial.

The Golden Doorknob Awards are annual awards given through the Roy H. Park School of Communications in which students make films involving creative ways to kill someone with a doorknob. Senior television-radio major Ben Ratner turns the tables on the dreaded doorknob and puts it on trial for murder in a Web series he produced, titled “The Murder Trial of the Golden Doorknob,” which premiered Dec. 4 with all eight episodes of the first season on YouTube.

Using films from the Golden Doorknob awards as evidence, the series puts the Golden Doorknob on trial for murders it has committed. Peter Johanns, associate professor of media arts, sciences and studies and director of the television-radio program, acts as the defense attorney, along with Natasha Tull and Douglas Robbs, local actors who have previously appeared in multiple Park School student productions.

The idea for the Web series began with Steve Gordon, assistant professor of media arts, sciences and studies, and his Program Development course in the Spring 2013 semester, where he asked students to brainstorm ideas for packaging the Golden Doorknob awards.

“The assignment was we have all these wonderful films, and how can we package these,” Gordon said. “How do we get these out into the world and make that something interesting?”

This topic piqued the creativity and curiosity of Ratner and a few other students in the course.

“We just immediately knew that putting the doorknob on trial for the horrific, horrific crimes that it’s done is just what had to be done,” Ratner said.

All eight episodes of the Web series are set in the courtroom as the prosecution, played by Robbs, attempts to prove the doorknob’s guilt, and the defense attorney, played by Johanns, argues the doorknob’s case. Past student Golden Doorknob Award entries are shown in an attempt to implicate the accused, and the doorknob himself is called to the stand.

Ratner and his group continued to refine their idea in their class and developed a plan to shoot and produce the series.

“The team that Ben was on, that was the best idea by far,” Gordon said. “Immediately, you could see here’s a doorknob on trial, the evidence is all our films.”

Tom Nicholson, assistant professor of media arts, sciences and studies, oversaw the sound recording on the Web series and liked the idea of incorporating past student films in this original work.

As the spring semester came to a close, members of Ratner’s group and some recent graduates decided they wanted to make “The Murder Trial of the Golden Doorknob” happen, expanding on the history of the annual Golden Doorknob Awards. They decided to shoot in the summer with about 22 recent Park School graduates and current students who were all enthusiastic to be a part of the production.

“I think they were excited about keeping the tradition [of the awards] going,” Gordon said. “This was a chance to be part of that tradition.”

Ratner and his team decided to continue the project outside the class on their own accord, so they gathered their production team and had funding provided by the Park School and faculty support.

“This is basically just a passion project for everyone involved,” Ratner said.

The production team took only five hours to shoot the eight 10-minute long episodes of the first season in one of Cornell’s mock-trial courthouses, with exclusively Park School students and faculty on the production crew.

“This was a pretty ambitious shoot that professor Steve Gordon had put together,” Nicholson said. “So several of us went over along to oversee the student crew because it was a large group of people and it was a pretty complicated shoot.”

Park students with a range of majors like television-radio and film and photography worked together to produce the entire series.

“It was really cool getting to work with Park School students from all different aspects of the school, different majors, different programs, using everyone’s experience over the last four years here at Ithaca to put together the best that we could do,” Ratner said.

The editing process spanned most of the Fall 2013 semester, and as Ratner worked on editing the series, Gordon’s distribution class marketed it, creating a blog, Instagram and Twitter accounts and a Facebook page.

“Basically, this is a real-world project that all of these classes worked on,” Ratner said.

If the series does well, Ratner and the rest of the “Murder Trial of the Golden Doorknob” team are considering producing a second season. Gordon said it was an interactive and enjoyable experience to work with such passionate students, with the content of the Web series itself offering a break from the normality of everyday school work.

“To me, school is sometimes serious, and often serious, and we do a lot of drama,” Gordon said. “But to me, this thing is very funny.”