Drawing on the past 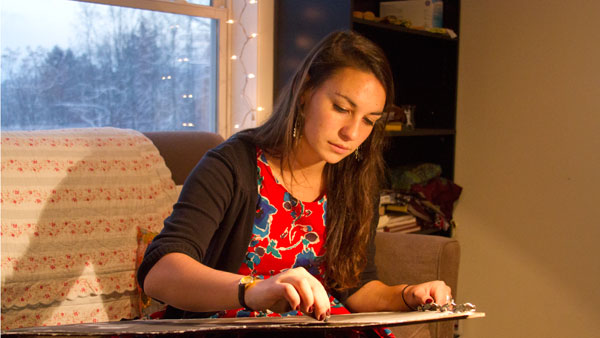 Senior Genevieve Cohn sits on the beige couch in her off-campus apartment, her hands covered in charcoal. Rather than turning into a messy disaster, her afternoon’s work is concentrated on a portrait of a friend. Her skilled fingers add the finishing touch to a wisp of hair on the shoulder and coppery accents to an otherwise black-and-white portrait.

People predominate in the canvases in Cohn’s collection of work. Her models are her friends and family, and sometimes herself. Some pieces zoom in on singular parts of the body, such as a shoulder and turned head or a hand poised on piano keys. All are defined by their deep shadows and minute details, which stem from Cohn’s fascination with the human figure.

“It’s great with figures and with portraits because you can either look at them just aesthetically and be like, ‘That’s a beautiful body,’ or it’s really easy to manipulate the body in order to create a deeper meaning, which can be really powerful,” Cohn said.

Cohn was drawn to Ithaca, N.Y., because she wanted a different environment than her hometown of Ferrisburgh, Vt. She attended Vergennes Union High School in Vergennes, Vt., and graduated in a class of only 100 people from five surrounding towns. Cohn first developed her love for art when she did an independent study of painting her senior year.

“I didn’t want to stay in Vermont,” she said. “I wanted to try something new.”

Cohn came to Ithaca College as an exploratory major. During registration, she saw that there was a space open in a printmaking course. Cohn said though she was intimidated at first, it was the best decision she could have made because it encouraged her to take more art courses and eventually to declare a major. She would not likely have gone down the same path had she not taken that chance, she said.

“I don’t know if I would have been brave enough to take an art class after [missing the opportunity],” Cohn said.

Along with her art classes, Cohn took several anthropology and sociology courses, but she said it was her Introduction to Culture and Communications class that inspired her to declare her double-major at the end of her sophomore year.

“The culture and communications major is great because it’s so interdisciplinary, and you can really follow what you’re interested in,” Cohn said.

Cohn said she is most interested in cultural diffusion, and her study abroad destinations reflect her interests. She has studied abroad twice — once in the Himalayan Mountains of India during the summer of 2012, and once in Granada, Spain, during the Spring 2013 semester.

“It blew my mind, every new place that I went to, the way that so many different facets of humanity can exist, and yet we all have this common thread,” Cohn said.

Though her artistic focus is still on drawing and painting, Cohn said her travel experiences have seeped into her artwork and have inspired her to try new forms of art, such as silk-screening.

“I did a silk screen where I kind of combined images from home and from Spain, and then with written letters, to express the pull between being abroad and the connection you have with home and the people at home and how you always take a part of where you travel with you,” Cohn said.

Cohn continued her study of art while abroad. While taking a six-week-long course titled “Himalayan Buddhist Art and Architecture” during her experience in India, she spent a few days in Delhi, which she said was terrifying.

“It was the first time that I felt like an outsider, which I think is a really powerful experience that everyone needs to have at some point,” Cohn said.

The India trip was Cohn’s first time abroad, and she said it sparked her interest in globalization and Americanization — the ways in which cultures coexist and interact. As part of her coursework, she traveled to many Buddhist villages and studied the art in the monasteries, which is closely tied to the region’s religious and cultural traditions. Cohn said her travels in India gave her a newfound appreciation for art history.

“I’d never really been interested in art history before,” Cohn said. “To actually be there and speak with monks and see the practice and how it influences the practice was huge.”

One of her fondest memories of her time in Spain with the Institute for the International Education of Students was her watercolor painting class, where she and her classmates would take their easels out into the streets of Granada and paint local landmarks. Her paintings from this class show silver steeples and spring trees in full bloom.

Senior Alison Stark, who also studied in Granada, said being in an art class with Cohn was rewarding from both a cultural and artistic perspective.

“The way she sees the world is really beautiful,” Stark said. “She notices moments that I feel like maybe some other people wouldn’t.”

Stark recalled a class trip to Morocco, where they traveled by bus through one of the biggest slums of Sale, just outside the capital city of Rabat. The students were told that the people who lived in the buildings with corrugated tin roofs had no clean water and that glue-sniffing was a rampant problem because other recreational drugs were too expensive. Stark said she was upset by the poverty she saw there, and that Cohn understood her feelings because of her previous encounters with poverty-stricken areas in India.

“I said something to [Cohn], and she understood where I was coming from,” Stark said. “It was nice to be able to have a real conversation like that, when I feel like some of the other students maybe wouldn’t have been able to.”

This semester, Cohn is back at the college and has turned her apartment into her own studio. Senior Liz Levine, who was Cohn’s roommate in Ithaca this past summer, said Cohn’s canvases were scattered all over the walls of their apartment.

Next semester, Cohn is taking another independent study in order to prepare a portfolio for graduate school, where she plans to study art education. But before she continues her education, Cohn said she has another travel excursion planned: a post-graduation, cross-country road trip with Levine to see the country’s landscape and work on her art.

“There’s so much diversity in the United States that I haven’t experienced, and I think it’s also pretty necessary to get a feel for what home is,” Cohn said. “I am planning on taking plenty of time to just keep making art and explore and travel.”