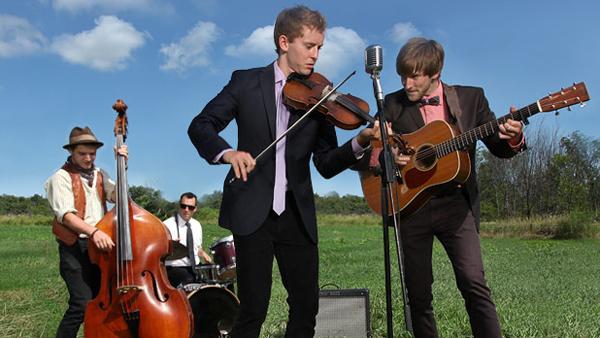 Coming to Ithaca College on Wednesday, The Abrams Brothers are a lively bluegrass group that will strum their strings for students at IC Square. The group is made up of brothers John and James and their cousin Elijah. They are the fourth generation of touring musicians in the Abrams family. Despite their ages — John and Elijah are 22, and James is 19 — they have been Canadian music festival regulars for years.

The Abrams Brothers’ cover of Coldplay’s “Viva la Vida” has been featured on Country Music Television in the U.S. “Northern Redemption,” their newly released album, dropped Tuesday. Staff Writer Vicky Wolak spoke with guitarist and vocalist John Abrams about family, inspiration from the wilderness and playing the Opry.

Vicky Wolak: How did each of you begin playing music?

John Abrams: My brother James and I started playing violin when we were really young. He was 6; I was just about 9 years old. We started playing Suzuki method classical violin. But I think we were inevitably going to start playing music at some point anyway, and this is because our family has been doing it for a long time.

VW: When did the three of you come together to form The Abrams Brothers?

JA: Because our family was getting together for band practices, my brother and I would kind of just be sitting around. We figured, “Well, let’s get involved a little bit here so that we’re not just being bored while everybody’s practicing.” So we got the itch to start to learn fiddle tunes, and James and I started singing harmony together. We actually have been touring as the Abrams Brothers band for about 11 years now, and then Eli joined the band about six years ago.

VW: “Northern Redemption” is your fourth studio release. What are you most proud of with this record?

JA: It’s our first all-original album. The lyrics are all drawn from inspiration of being here in the Canadian wilderness and in the Canadian rural areas, and, of course, our many years on the road touring have seeped into our lyrics. I think we’re excited about just achieving our own unique musical identity with the record, certainly lyrically and also in the music. This album was a real process. It came out of three years of work, where we were just coming together, writing songs and figuring out our sound for this record as a band, and I think we’ve achieved that. We’re very happy with the direction that it’s gone in.

VW: In 2005, you were the youngest Canadian musicians to perform at the Grand Ole Opry in Nashville. How did that make you feel?

JA: We were on as guests of Mike Snider and his string band. I’ll tell you a little story: We were in the backstage area hanging out, just warming up in the dressing room, when all of a sudden, Mike Snider left the room unannounced. Everybody followed him and we figured, “Well, it’s probably best if we follow suit, too, because we don’t really know our way around back here.” We headed over to the stage and he was about three feet away from walking out to where the curtain ended, and I tapped the mandolin player on the shoulder and I said, “So this is sound check, right? We’re going out just to check our mics?” I didn’t expect anybody to be out there. And he said, “No boys, this is it.” And literally two seconds later, we’re out on the stage in front of 4,500 people.

VW: Ithaca is the first U.S. stop on your tour. Why did you choose to start here?

JA: We’ve been through Ithaca before and never actually stopped and played in Ithaca. Growing up playing bluegrass around the U.S., we’ve been very fortunate to be exposed to some beautiful countryside in your country. So we’re very excited to come back and bring our Canadiana to meet with the wonderful Americana culture, and it’s just a thrill every time we get to go. We’re really excited to see some really neat places on tour, and certainly we’re going to be taking a lot of pictures and videos, and Ithaca will be no exception. We’re going to have a lot of fun at the college.

The Abrams Brothers will perform at 8 p.m. Wednesday in IC Square.