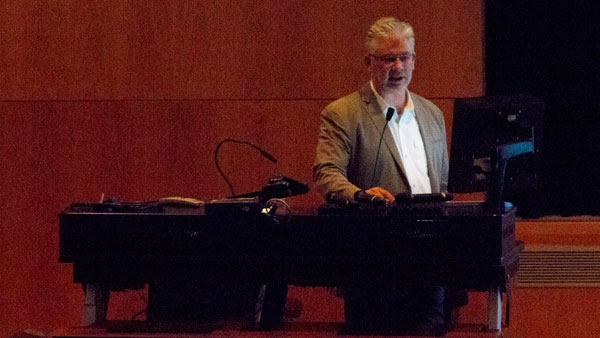 Carl Potts, famed for his previous position as editor-in-chief for Marvel Comics, visited Ithaca College to discuss his upcoming book, “The DC Comics Guide to Creating Comics: Inside the Art of Visual Storytelling,” to be released Oct. 8. After 13 years at Marvel, Potts left to become the creative director at VR-1, a multiplayer online video game company. He currently is a professor at the School of Visual Arts in New York City, as well as a freelance writer and artist. During the presentation, Potts highlighted Sequential Visual Storytelling, which he said is a commonly neglected element of the comic industry. He encouraged students to let the story write itself and to give readers what they expect, but not in the way they expect it.

Contributing Writer Emily Renne spoke with Potts regarding his work experience at Marvel and the journey to his current success.

Emily Renne: What inspired you to get into the graphic-design industry?

Carl Potts: I’ve been passionate about visual storytelling since I can remember. Comics were a part of my generation, and I grew up with them, so I was familiar with [them]. Comics are my favorite medium, and I felt I had the strongest tools to use in the industry.

ER: When and how did you first discover your talent?

CP: I decided to move to New York and get into comics, and I showed my work to some of the comic professionals there. I look back at that work now and wonder why anyone would have bothered to work with me at all. That’s another reason why I look at someone’s work today, and if it’s really rough I still give them a fair chance.

ER: In your presentation, you talked about how comic artists typically find their style when they receive more positive feedback. Did you ever experience this?

CP: When I first started out and worked on storyboards, I took lessons from there to put into my comics. I didn’t put a lot of stock in feedback due to people who were not so complimentary and took advantage of their roles, and who were more of bullies than anything.

ER: Do you have any personal relation to the characters you created for Marvel Comics?

CP: Dr. Strange, who also initiated my love for Marvel. I think of him as a below-the-radar character and sort of a class act.

ER: In the past, many employees have criticized Marvel for the company’s poor treatment of its workers. How did you personally feel about the work environment during your time there?

CP: I felt that the employees generally got along, had fun, but still worked productively. I worked at Marvel during a period where it had its greatest publishing success. I think that as the work environment started to suffer, so did the company.

ER: How do you overcome weaknesses in your work?

CP: I tend to redraw and write around stories, and find that I lean towards the subjects I enjoy and shy away from the stuff I don’t know and aren’t really comfortable with. When I notice this, I try to force myself to do the needed research to develop that area.

ER: Were you ever able to work on any Marvel films or TV shows?

CP: Not really. The closest I came was I did the writing for the old Fox Saturday morning “Spiderman” TV show. One of the things I did at Marvel is I developed the character “The Punisher,” who had been around a while, into its own mini-franchise with certain ongoing titles and a bunch of graphic novels. Since I got to be known as “The Punisher” of the show, they asked me to write those episodes.

ER: Why did you choose to leave the classic, print-comic industry and enter the world of online gaming with VR-1?

CP: It was more that the company started cutting its staff, and I was aware of this. I also found that the higher I got in the company, the more political and less creative the job became. I wanted to discover gaming and was invited by connections at VR-1 to work for them. It took some adjusting, but I did develop a passion for the digital medium.

ER: What has been the highlight of your career so far?

CP: I really loved finding and developing top talent at Marvel, as well as discovering diversity in print and editing a broad range of books.