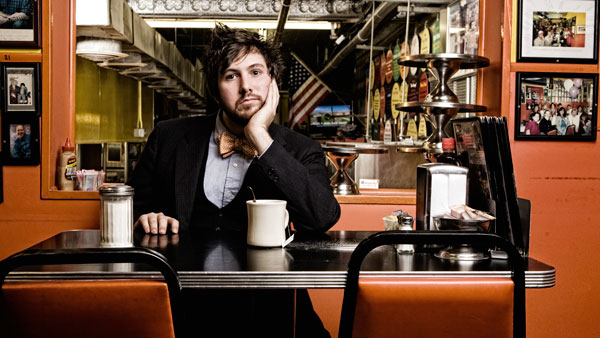 Courtesy of Joshua Shirlen
Adam Day ’07 will perform Oct. 16 at The Nines, located at 311 College Ave. During his time at Ithaca College, Day was a music student who almost failed out of school. He will tour the East Coast and Midwest until Nov. 14.
By Marissa Framarini — Staff Writer
Published: October 9, 2013

In the past six years, Adam Day ’07 has released an EP titled “I Stayed Up Late to Make This EP,” almost failed out of college and arranged his own city-to-city tour venture to promote the songs on the EP. The tour, which kicked off Oct. 2, will take Day from Brooklyn, N.Y., to Chicago, including a stop in Ithaca on Oct. 16 at The Nines.

Staff Writer Marissa Framarini spoke to Day about his passion for making music, sleeping on strangers’ couches and the next step in his career.

Marissa Framarini: How did you get involved with music?

Adam Day: Back in high school, I really wanted to be a doctor, but at the same time I was applying to schools. I was starting to write my own songs and play them out live. I realized that maybe music is more of a passion for me than medicine, and at any rate, I thought I could try it out and do music now and go back to trying to be a doctor in my 30s. So, I started to look for music recording programs, and Ithaca really stuck out to me. I crammed and took a bunch of lessons and went to Ithaca College to audition on classical guitar, which is something I never played before. I happened to get accepted to the program and came to Ithaca College as a music school student. I became so involved in playing music, though, that I almost failed out of school. I wouldn’t condone this behavior, but I just cared way more about promoting for my next show, or writing my next song or even recording a record than I did about going to class.

MF: Why have songs like “I Will Follow You Into The Dark,” by Death Cab for Cutie inspired you to create cover versions for your YouTube channel?

AD: For starters, it’s a great song. I love the work of Death Cab for Cutie. They had this record, though, on iTunes called “Studio X Sessions” with this really gorgeous rendition of this track “Blacking Out The Friction.” I loved the sound of that recording, and I also really loved “I Will Follow You Into The Dark,” and I wanted to see what I could do with the song to make it a multi-instrument recording as well, because the original only features acoustic guitar. It was a really fun thing to do — sort of a rush project. We got a studio for four hours, and it felt like a marathon trying to cram it all in.

MF: If you could have any band cover your songs, who would it be and why?

AD: I have two answers. The first is the last band that really stunned me — Fleet Foxes. I think their “Helplessness Blues” album is one of my favorite albums of all time. I have a lot of respect for their craft and the way they arrange songs, so I would love to hear what they would do with my song. And then, I also have a dear friend here in New York City named Amy Vachal who has a gorgeous voice. It would also be cool if Daft Punk did a cover.

MF: Do you have a favorite memory from being on the road?

AD: There was one tour circuit where I decided I did not want to stay in a hotel the entire trip. My goal at every show was to meet someone in the audience who would let me sleep on their floor. I met several people in Cleveland and Cincinnati, Ohio, as well as Lexington, Ky. I slept on their couches and had breakfast with them, and a couple of them ended up being [my] friends for life.

MF: What’s next for you?

AD: The last record I made was in Ithaca, and I haven’t really released anything since. So it’s been quite a long time. I have a large body of work that I’m really gearing up with some producers and composers to put together and really just want to get them out there.