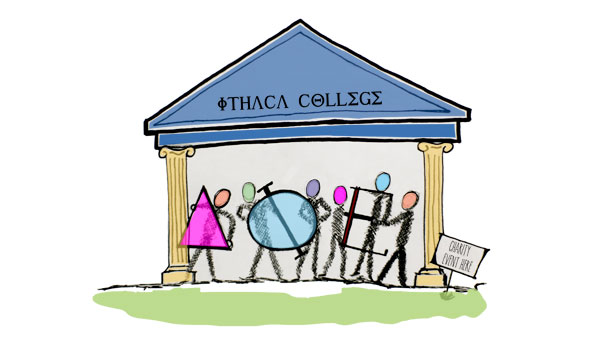 In the early morning hours of April 2, 1980, freshman Joseph Parrella collapsed in Terrace 6. He had been participating in Delta Kappa fraternity’s initiation rites, which involved the 14 DK pledges doing 100 pushups, then running up and down a steep hill, doing 100 more pushups and sprinting up and down the hill again. The concerned DK brothers circled around Parrella, who had become severely overheated and was having difficulty breathing, and asked how he was feeling, to which Parrella reportedly replied, “Sucky.”

Sensing the seriousness of the situation, the fraternity brothers carried him into the hallway and removed his clothing in an attempt to cool him off. A brother began administering CPR and called an ambulance. Parrella was then transported to the Tompkins County Hospital, where he later died from hyperthermia, or heatstroke, as a result of the intense calisthenics he and the other pledges participated in.

In June 1980, a Tompkins County grand jury investigation found DK guilty of hazing, murder and “collective stupidity.” This prompted the college to reevaluate the need for Greek life. While professional music fraternities were allowed to continue, social fraternities and sororities were subsequently dissolved.

Despite this ban, which continues to this day, fraternities and sororities still exist unofficially on campus and are gaining ground at the college, though they are unaffiliated. Two of these unaffiliated Greek-letter organizations are Alpha Epsilon Pi, a Jewish fraternity, and Gamma Delta Pi, a social service sorority.

Junior Ben Feig, president of the Ithaca colony of AEPi, stressed the fraternity is strictly against hazing and aims to provide a community of brotherhood to male students.

“Our main goal is to provide the Jewish man, but more particularly a college student, any college man, the opportunity to develop leadership and participate in a brotherhood,” Feig said.

Since its founding in the Town of Ithaca two years ago, Feig said, about 50 brothers have joined the colony. This semester, there are 43 AEPi brothers, three of whom are studying abroad, he said.

As with any fraternity, AEPi must do philanthropic community outreach. Feig said AEPi maintains a highway for Adopt a Highway by keeping it clean, attends builds for Habitat for Humanity and participates in the Relay for Life each year.

Feig was a founding father, one of the first members, of the fraternity. He said he was initially interested in beginning the fraternity to see what would happen as a sort of experiment.

“I think everyone that originally became part of the organization just wanted to take a gamble just to see what it would end up being,” he said. “We never anticipated what it kind of is now. I guess more specifically and individually, I kind of wanted that brotherhood and that close connection to other people.”

The sorority of Gamma Delta Pi has existed in Ithaca since 1965. Junior Kayla Bledsoe, president of GDPi, said when the college instituted its ban on Greek life, the sorority continued to function as an unaffiliated organization. Like AEPi, an important goal for the sorority is to give back to the community. GDPi sisters, of which Bledsoe said there are about 40, participate in the Relay for Life every year and various charity walks, among other activities.

Bledsoe joined GDPi as a freshman with her friend Corinna Klinger, who is also a junior and a former GDPi president. Klinger said when she was applying to colleges she did not think about Greek life, but upon coming to the college and hearing about GDPi, she decided to see what the sorority was about.

“I was interested in learning more about different people on campus, like people I don’t necessarily come into contact with a lot,” Klinger said. “And then just finding this group of girls and being able to fit in was really cool.”

While the college still does not allow social or service fraternities on campus, Michele Lenhart, director of student leadership and involvement, said it is not concerned about these unaffiliated groups.

“We haven’t had anything that has happened that has raised a concern,” she said. “I think probably if there was an incident, that’s probably where there would be some concern. But as of right now, as far as I can tell, they’re social organizations. People are getting together and going on picnics or having a party somewhere, but there hasn’t been anything that’s disruptive to campus or to the students’ lives.”

For some, Greek life offers a way to connect with students at Cornell University. Senior Tariq Meyers joined the Phi Beta Sigma fraternity at Cornell when he was a sophomore. He said he never planned on “going Greek” in college, but after meeting some PBS brothers at a step show in downtown Ithaca and hearing of their commitment to activism and social service, he realized the brotherhood they offered, especially their motto of “Culture for service, service for humanity,” was a good fit.

“There was just something about Phi Beta Sigma’s motto that … as someone who comes from a place of activism, as someone who’s very interested in activism, Phi Beta Sigma has historically taken a position where they are going to be part of the community instead of apart from it,” Meyers said.

Though Meyers said he has enjoyed his time in PBS, he does not feel the college is necessarily lacking something without Greek life.

“I think that Ithaca becomes a special place because you don’t have to deal with the politics of Greek life that you sometimes see on other campuses,” he said. “What distinguishes Ithaca from other universities is that you don’t see this kind of cliquey, hierarchy of student organizations or frats … it’s kind of a level playing field, and it keeps our community pretty diverse and cohesive.”

While the unaffiliated Greek organizations on campus have been consistently gaining members each year, according to a survey conducted by The Ithacan, 61 percent of students are uninterested in joining Greek life. Feig said he believes some students have the wrong idea about Greek life, and their perceptions are formed largely by pop culture, which emphasizes the prevalence of binge drinking, hazing and assault — all things Feig said AEPi is not about.

“They think it’s ‘Animal House;’ it’s nothing like that … We’re all people that want the same love and affection from each other and are looking to be in a family environment,” he said. “We generally try to encourage no alcohol and usually events go better that way. People work better when they are sober, they are motivated and obviously more capable of doing activities and performing their fraternal duties.”

Meyers agrees that many stereotypes about Greek life exist on this campus. He said he sometimes has felt other students looking at him as a party boy, simply because he’s a member of PBS.

“To be honest, there are times when I felt like I’ve been looked at differently for being Greek,” he said. “I’m a student trustee on campus and president of a student organization, I’ve done a lot of great things, but there have been times when I’ve opted not to wear a fraternity pin or not to wear letters to a particular event because I felt as though I’d be looked at differently because our campus doesn’t necessarily have an understanding of what it means to be Greek.”

As unaffiliated organizations, AEPi and GDPi have been able to function like any Greek organization even without the college’s endorsement. The groups host all their events and rush nights off campus, unless they specifically ask the college for permission. Feig said this allows AEPi more freedom with fundraising and activities. With this flexibility, both AEPi and GDPi said they don’t feel affiliation presents many benefits.

Meanwhile, 63 percent of students surveyed about unaffiliated Greek life on campus said they would like to see the college reevaluate its policy.

Meyers said he sees both sides of the argument. He said he does not think the campus is ready to have Greek organizations because there is not enough understanding about what the groups can do outside of the stereotypical perceptions of partying and drinking. But if enough students advocate for a reconsideration of the policy, the administration may want to reevaluate it.

“The college would then be able to hold student organizations accountable, and the students here would be able to program and be able to experience Greek life on this campus,” he said. “This is something that students talk about all the time, but I’m not sure if there are enough students talking about it to really catch somebody’s attention.”