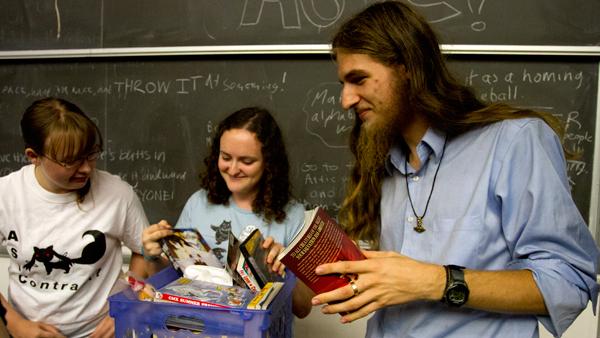 A group of 20 to 30 students sits with their eyes glued to a large projection screen in Williams 225. Suddenly, a dramatic scene between a cursed princess and her two protectors illuminates the engrossed faces.

“This is the first episode, and we’re already getting deep?” someone from the crowd shouts with a chorus of laughter following shortly behind.

The Anime Society of Ithaca College is a club filled with enthusiasts of Japanese animation, anime and manga.

Senior Zoë Epstein, president of ASIC, has been with the club since her freshman year. She said she especially enjoys the community the club has fostered for its members.

“People who like anime are often treated as the extreme geeky, ‘stay away from them’ sort of people,” she said. “The club is a place that you can come and celebrate what you like in a safe environment where people aren’t going to look down on you for being enthusiastic about it.”

Though ASIC has been a student organization at the college for many years now, they are seeking new members regardless of their familiarity with anime.

The club is very passionate about what they watch. Shouting out during episodes is highly encouraged and only frowned upon during very emotional scenes that aren’t being dramatized. Given the night’s viewing choices, a scene rarely got away without having one or two jokes made at its expense.

Despite the jovial attitude, sophomore Kirk “Nort” Norton, vice president of ASIC, sees both anime and manga as more than just mindless entertainment.

“The thing that I like the best about it is that it’s an intelligent art medium, it’s not just what you would assume of like American comics are that it’s an excuse for gags and stuff,” he said. “There are series that I follow that I would argue approach literature.”

At their first meeting, a contest was held to see who could come up with the funniest answer to the question, “What would you make your invisible penguin do if you had one?” The winner responded with “Breed shiny Magikarp for me,” and was rewarded a choice from a bin of manga books and anime DVDs that had been donated by previous and current members of the club. Some of the items inside were also from ASIC’s early years when various companies had given them demos.

Norton said he became exposed to the animation when he was young through mainstream shows like “Pokémon,” “Naruto” and the Studio Ghibli movies, such as “Howl’s Moving Castle.”

“It started out back in middle school,” he said. “I was a Pokémon fan, and I subscribed to a Pokémon magazine and that eventually branched out into more of a general anime magazine. I really got into it especially through the more well-known series like ‘InuYasha’ and the Studio Ghibli movies. And from there I started meeting other people who liked anime and got into the more obscure stuff like what [we] saw tonight.”

While “obscure” series are showcased, newcomers to the club are welcomed with open arms. Sophomore Michaela Shelton said it’s very easy for anyone to find a series through the club that they could enjoy.

“Everyone can always find one that they like because there are so many different kinds,” she said. “It can encompass everything you are interested in. And they can be very intricate and make you think a lot, or they can just be silly.”

Epstein said she is looking forward to new members joining the club and experiencing a creative piece of Japanese culture.

“We just really like it when people show up, and we enjoy sharing what we like and being enthusiastic about it together,” she said. “So, converting new people — that’s happened a few times — is a wonderful thing for all of us.”