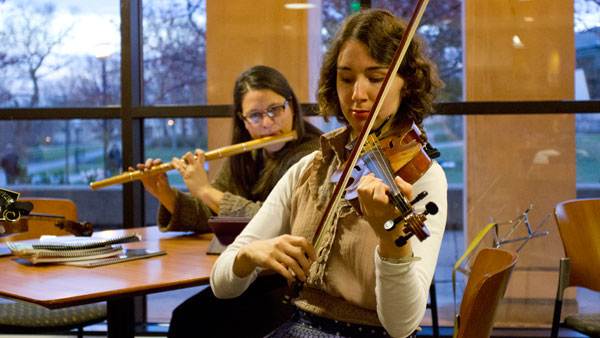 Sounds of mandolins, violins, guitars and flutes fill the air, while students eat, talk and huddle over laptops in the IC Square. The atmosphere is permeated by traditional folk music, which only draws more students to the area.

Every Friday, from 4–6 p.m., students and faculty alike meet in the IC Square for the IC Open Contra Jam Session. The group plays traditional dance folk tunes from Ireland, England and the United States in an informal jam-band style. The tunes, ranging from jigs to waltzes, are decided on-the-spot, and many times members learn and sight read the music during the jam sessions.

The group was created by Rachel Wagner, associate professor of philosophy and religion. Wagner said Contra music has its roots in traditional dance but draws upon music from all across the world.

“Contra music is an old tradition that builds on older traditions; it builds on English country dancing,” Wagner said. “It draws upon Irish, Scottish, Canadian music and American music.”

Wagner said she founded the group at the beginning of this semester to create an environment open to all individuals to jam along in a relaxed setting to traditional folk music that is danceable as well as melodic and layered.

“I really wanted to find a way to have the campus be able to participate in this local tradition,” Wagner said. “It’s something that I do on my own time, and I wanted to integrate my work life with my off-campus life.”

While the number of musicians attending varies from roughly six to 10 members, the core of the group consists of sophomore Austin Savage, junior Lindsey Clark and senior Alyssa Rodriguez, who have been participating in the jam all semester.

The sheet music is posted every week on Intercom for anyone to learn so that those interested can come and participate whenever they like. The group is informal in nature, containing musicians from multiple backgrounds, ages and musical experience.

Aaron Weinberg, associate professor of mathematics who primarily plays the accordion, said the group’s rehearsals are conducted casually, randomly picking tunes to play, and there is still room for experimentation and to explore fun ideas.

“Some of the songs have relatively simple melodies or chord progressions while others are more complex,” Weinberg said. “However, some of the simple songs are played quite quickly, and there is always opportunity for playing harmonies or embellishment, so you can always challenge yourself.”

Clark said the members of the group switch instruments often, changing from violin and viola to whistles and flutes. She said this is typical for most contra jams and helps to create a more casual jam.

“It’s really common for folk musicians to just have a ton of instruments and switch on and off,” Clark said. “It’s common for people to bring a fiddle and a banjo and other instruments.”

Other members of the contra dance community come to the jam sessions as well, lending their experience to the group’s members who are less familiar with how the jams are oriented. Michael Ludgate, who teaches private lessons and performs in Ithaca-based contra groups like the O’Shanigans and Notes Inegales, plays fiddle, mandolin, Irish tenor banjo, guitar and foot percussion. Ludgate said he is drawn to the accessibility and simplicity of folk music, which contains few chord changes and simple melodies that vary on a similar theme.

“That’s what makes these tunes stick around for hundreds of years,” Ludgate said. “They’re easy to read and remember.”

Ludgate said the group would like to play off campus, in the community and to play with dancers, but it has no concrete plans as of yet.

“We’d like to play downtown,” Ludgate said. “We’ve got this jam we’ll probably play at the local dance, it’s every Friday at Bethel Grove Community Center.”

Wagner said she hopes to bring in more students next semester, both to bring awareness of contra music to the college and to create the ability to expand and do more things with the music.

“We’re trying to build it right now on campus,” Ludgate said. “If we got enough interest and stability, we could potentially have the contra dances here too. But until we have something established, it’s just the music for now. But it’s open, it’s for everybody. It’s for amateur to expert.”