Gypsy Gets Shotgun plans to unplug 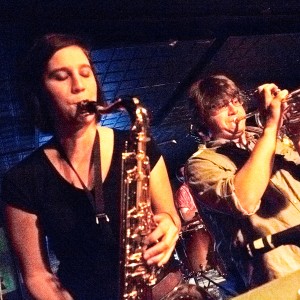 The rules of riding shotgun are well known, but not many know about the GPS clause. When someone provides the GPS for a long drive, they are entitled to sit in the front seat. The saying goes: The driver picks the song, but the gypsy gets shotgun.

Two and a half years ago, junior Thomas Fuller had this rule in mind when he suggested the name for what would become the seven-member, punk/ska band Gypsy Gets Shotgun. With an album on the way to release and three EP tracks under its belt, the band has entertained a wide group of local fans but now faces the countdown to what may be the group’s final number.

Gypsy Gets Shotgun was formed by vocal artist Fuller and guitarist junior Jeremy Betterley in 2010, during the fall of their freshman year. Both shared an enthusiasm for making music and had experience playing ska music in high school.

“[Betterley] was playing bass, and I was just singing around, playing my melodica and tambourine, just making noise,” Fuller said. “And we thought we kind of had some good songwriting chemistry.”

By the end of the semester, they had recruited five other members — junior Jeff Chilton on the trombone, junior Meghan Kelly on the tenor saxophone, senior Jimmy Rose on the trumpet, junior Jason MacDermott on the drums and junior Brendan Duran on the bass.

Betterley said Gypsy Gets Shotgun has performed more than 20 shows at venues such as former bar Culture Shock and The Nines. The band members said they love performing live shows and give credit to their loyal fans who often sing along to the lyrics of favorite songs.

“I never feel more support from my friends and from people in general when I see them at a show and they’re having a good time,” Chilton said. “I feel more connected to them. It means so much to me that they’re there in the first place. It’s the gratitude and the feelings you get. That’s not very punk rock, but that’s okay.”

One of their fans, junior Jack Simons, who plays bass in The Yips and guitar in Unicorn Harvest, has attended many shows and says he will miss the band during their absence.

“There are so many shows where they’d all be up on stage going nuts,” Simons said. “To me, I just associate them with the music scene. They’re such a big part of the community. It’s too bad that they’ll be taking a break. They’re definitely a force to be reckoned with.”

But with Betterley and MacDermott leaving to study abroad for the spring semester, the musicians are placing Gypsy Gets Shotgun on the back burner. This semester, the band reached the collective decision to perform in shows, but only if asked. None of the members are searching for gigs, and as a result, rehearsals have dwindled.

Betterley attributes the reduction of rehearsals to the lack of new material. With their recordings finished, the need to gather everyone and practice is no longer as imperative.

This leaves the band in a predicament over the fate of Gypsy Gets Shotgun. There are two different ideas concerning the future of the band, and the members are determining which course of action is best. One option is to end it permanently with a final, funereal performance.

“We said, because our guitar player and drummer are going abroad, that we would have a final show where we drag the band on stage and murder it mercilessly and skank in the syrupy red blood,” Fuller said.

There appears to be an overarching consensus of the band to give Gypsy Gets Shotgun a lifespan and let it fade from the music scene in Ithaca. McDermott, who will travel to Ireland in the spring semester, hopes for a graceful conclusion to the band.

“It looks like this is our last hurrah,” McDermott said. “We may come back for a reunion show. We’ve had a good run. I think we’re all ready for a change.”

Other band members are not as inclined to let the band go. Betterley sees the appeal of the finality of a performance annihilation of Gypsy Gets Shotgun but hesitates to follow through.

“It’s kind of cool telling people this is the last show — you have to celebrate it,” Betterley said. “That’s what appeals to me about the idea, but ending Gypsy is not what I want to do.”

In the meantime, the band has tentative plans to release its album by the end of the semester. The album will contain 12 original songs and a few bonus tracks, including a cover of “Mary J” by Desirable Sun, and will be available to download for free on Bandcamp and MediaFire.

The band did shows at The Nines on Nov. 1 and Nov. 3, and on Oct. 28 opened for Big D and the Kid’s Table, one of the bands that spearheaded its ska musical influences. Gypsy Gets Shotgun welcomes the opportunity to perform because, though the musicians have begun to drift, for many members the live performances are the best part about being in a band.

“What other time do you go into this loud, dark bar and there’s just people sweating for an hour listening to the somewhat shitty music that you wrote but that you love,” Chilton said. “I hate parts of the songs that I’ve written, but I love them at the same time, and to hear other people having a good time listening to that beautiful, disgusting, ugly music— you feel so connected to everybody.”

On Dec. 8, Gypsy Gets Shotgun will perform at The Haunt for Ithaca Underground’s Big Day In with bands such as Barista and the Screaming Females.

“We don’t really practice much anymore,” Fuller said. “But when there’s the rallying cry of a show, we all get together under the motley flag of Gypsy Gets Shotgun.”

Gypsy Gets Shotgun will be performing at noon on Dec. 8. at The Haunt.