How about a shave?: College collaborates with Cornell on musical thriller 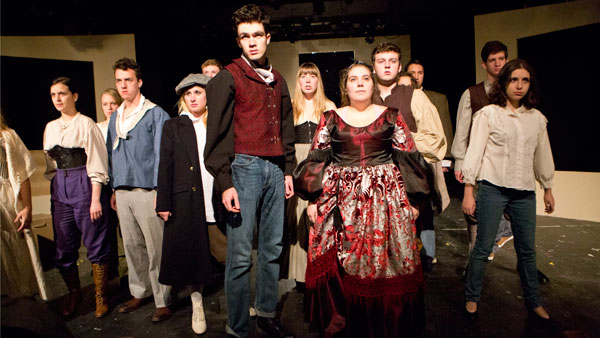 In Cornell University’s Risley Theatre, the stage is set with movable wooden boxes, plain flats with large square holes and only a few props. Actors in corsets and breeches make up the crew, organizing their set changes. The lights cast harsh shadows on their faces, but reflect perfectly off a single silver razor blade.

Traditional productions of the musical thriller “Sweeney Todd: The Demon Barber of Fleet Street” involve ornate sets and complex special effects. But when Ithaca College junior Ben Poppleton began the rehearsal process for the Melodramatics Theatre Company’s production, opening on Halloween night, he wanted a minimalist set reminiscent of a 19th century London warehouse that would put the attention on the characters, played by students from both Ithaca College and Cornell University.

“Most people think it’s just a serial-killer barber that does these things, but I think of it more as a commentary on humanity and how we all portray two sides of a character,” Poppleton said.

Written by Hugh Wheeler and composed by Stephen Sondheim, “Sweeney Todd” follows a tortured barber who returns to London after being falsely condemned to 15 years of exile in Australia. He discovers that his wife is dead after being raped by the corrupt Judge Turpin (Ithaca College junior Fred Diengott), who has taken custody of Sweeney’s daughter, Johanna (Ithaca College graduate student Abigail Doering). Sweeney is taken in by the widowed Mrs. Lovett and reopens his barber shop above her failing pie shop. When his plan to murder Turpin fails, Sweeney goes mad with revenge and begins slitting the throats of his customers, while Mrs. Lovett bakes the bodies into her meat pies.

The original Broadway production, which starred Len Cariou and Angela Lansbury, won the 1979 Tony Award for Best Musical. The 2007 screen adaptation of the show starred Johnny Depp and Helena Bonham Carter and was directed by Tim Burton. While many celebrated actors have played these roles, Poppleton said he is confident the Melodramatics cast will rise to the challenge of Sondheim’s notoriously operatic, challenging score.

“That was our basic term for auditions: This show is difficult,” he said. “We’ve got to find a cast and crew that can handle this sort of thing, and they’ve just blown it out of the water.”

Cornell junior Alex Quilty, who plays the titular character in the production by Melodramatics, said he wanted to show a more humane side of Sweeney Todd in his portrayal of the character.

“He needs to be intimidating, and he needs to be frightening, but he needs to be relatable, too,” Quilty said. “He’s not a bad guy. Yeah, he kills people, but he believes he’s doing the right thing — what’s just and what needs to be done. He’s not just some monster.”

Ithaca College senior Laine Levitt, who plays Mrs. Lovett, said she wanted to explore her character’s comedic possibilities, especially in two of her solo numbers, “The Worst Pies in London” and “By the Sea,” where she gets to move around the stage have the most fun with the role, she said.

“She’s always likable because she’s funny, but towards the end, I want [the audience] to think back and be like, ‘Oh my God, that woman was crazy,’ but in a way that anyone could be,” Levitt said. Both Levitt and Quilty said they also enjoy performing the diabolical duet “A Little Priest,” in which Sweeney and Mrs. Lovett scheme to use the bodies of Sweeney’s victims as pie filling. The tongue-in-cheek lyrics poke fun at different professionals who could end up as chop meat, including rear admiral, which Sweeney calls “too salty;” politician, who is “so oily it’s served with a doily;” and actor, who “always arrives overdone.” Unlike the duets, the solo numbers, such as “Poor Thing,” are more somber and serious in tone

“That one’s fun because Alex and I get to do it together,” Levitt said. “The other ones are just me singing and Alex standing there as Sweeney, brooding.”

Melodramatics first produced “Sweeney Todd” in 2007, but decided to bring the show back for the group’s 10th anniversary season. Poppleton said the show has grown in popularity because of the film adaptation, and he welcomed the opportunity to put a new spin on the thriller.

However, the show keeps Melodramatics’ tradition of community and collaboration between Cornell and the college. Ithaca College junior Leanne Contino, who is in the show’s ensemble, said all the cast and crew members kept an open mind and were eager to meet new people from the beginning of the rehearsal process.

“The other day, we sat at rehearsal and I realized, ‘Oh, we’re all friends now,’” Contino said. “You see these people all the time, and you’re working with them X amount of nights a week, and you just form this friendship and this bond as cast members.”

Quilty said he hopes that the audience will appreciate both the light and dark elements “Sweeney Todd” has to offer.

“It has weight, and there’s a lot of meaning, and there’s a message to get across,” Quilty said. “But there’s comedy sprinkled throughout, and it’s not just a joke here or there. It’s entire scenes and songs that are just puns, and it’s hilarious, but about serious [things] — killing people and baking them into pies. But we’re having fun with killing people and baking them into pies.”

“Sweeney Todd” will run from Oct. 31 through Nov. 7 at Risley Theatre at Cornell University. Tickets are available online at melodramatics.ticketleap.com/sweeney.