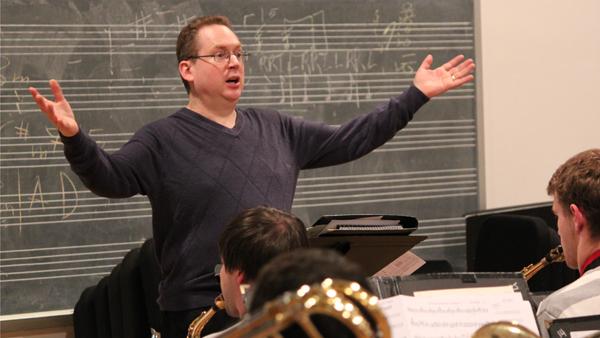 Deﬁning a style of music and describing exactly what makes a genre different from others may seem like an impossible task, even when explaining it to someone familiar with the music. Bringing that definition to children who have had little-to-no exposure to that genre may be even harder.

On Saturday, Ithaca College’s Jazz Ensemble and Jazz Vocal Ensemble attempted to do so with their concert “What Is Jazz?” at Ford Hall in the Whalen Center for Music. The concert exposed local children to jazz music through familiar songs such as “Happy Birthday” with a jazz twist.

Mike Titlebaum, assistant professor of performance studies and director of the jazz ensemble at the college, said he hoped the concert instilled an appreciation for jazz music in the children.

“We want to make sure that we teach children about the fundamental aspects of jazz that really makes it unique from any other form of music,” Titlebaum said. “We want to make sure we do it in a way that’s fun and engaging to kids and really hope to build a passionate audience for the music that we love so much.”

Though not all of the students involved in the concert plan to be music teachers, they are embracing the role of educator as an inevitable part of the craft. Senior Damien Scalise, a guitar player in the jazz ensemble, does not wish to primarily become a music teacher. Despite this, he said the traditions of a genre of music must be passed on.

“Jazz is America’s music, it’s our art form,” Scalise said. “There’s jazz happening all the time. There’s people making this beautiful music that’s so emotional and powerful, and everybody should know about that and know that these things are going on. It’s really important.”

Junior Josh Condon, piano player in the jazz ensemble, said he feels a similar responsibility. He said he believes that the more people are exposed to music like jazz, the more comfortable they are with it. Jazz, like any other art form, must be taught to future generations so it can survive and evolve through time, he said.

“Informing this group of students about what makes jazz jazz [helps] to conserve the character of the music and to further it in its history for our future generations,” Condon said. “It’s always been about mentors passing it on to other people; I think it’s just one way of doing that.”

Titlebaum said the idea for this concert came from composer Leonard Bernstein’s series of Young People’s Concerts. These televised concerts in the late ’50s and ’60s demonstrated different genres and gave deﬁnitions of various aspects of music. The concerts covered topics like “What makes music symphonic?” and “What is orchestration?” to educate children about different types of classical music.

In addition to playing songs, the ensemble modeled a demonstration by Bernstein. It involved playing a song with “blue notes,” lower notes that are typically used in blues music, and then playing the same song, but without those notes.

“You can tell right away that there’s something missing, there’s something really wrong, and it’s the same thing with the sort of tonal qualities of the music,” Titlebaum said. “[It shows] some of the gritty tonal quality, the uniqueness of sound that jazz musicians are usually striving for.”

Senior Will Sigel, drummer in the jazz ensemble, said he hopes this performance will show the audience the subtle and intangible differences between jazz and other forms of music.

“They’re going to demonstrate one of the main components of jazz, which are blue notes, by playing a tune without any blue notes, and then it’s going to sound really weird,” Sigel said. “Then they’re going to play with the blue notes and it’ll sound right. The kids will [just know] that it sounds good.”

For Titlebaum, the most important part of this concert was to reach out to each member of the audience to show them exactly what jazz is about.

“We try to look at every member of the audience and try to reach that person, try to reach one kid at a time, one person at a time, and try to build their love of the music, try to educate them a little bit to what it is the music is all about,” Titlebaum said.