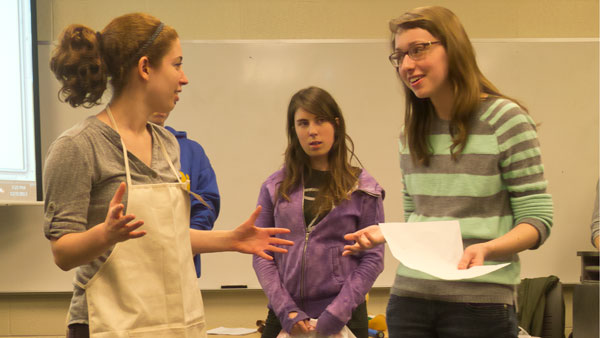 Internships have become almost a rite of passage for many college students looking to break into a career. They are supposed to serve as a window to the professional world, but some interns complain the experience is reduced to running errands.

“Internal Struggle,” a sketch-comedy written and directed by senior Talia Koren, explores the more unsavory side of interning. The show will be performed at 8 p.m. Dec. 5 in Klingenstein Lounge in the Campus Center.

Koren, who herself has had six different internships, decided to write the show last May during an independent study, hoping to comment on the growing controversy surrounding internships. She said the sketches are more based on her own anxieties about internships than her actual experiences.

“One of my favorite sketches is more like one of my fears,” Koren said. “It takes place in a bathroom, and it’s an intern pooping next to her boss. Which to me is a scary thing … if that ever happened, it would be so awkward.”

She held auditions in October to cast 13 actors in the six sketches, and since then has had eight rehearsals. There is no overarching narrative or story, but Koren hoped to give a critique of interning in each sketch.

“I like comedy with a purpose; I wanted to kind of get a message across, like how I feel about internships,” she said. “There’s this experience paradox where you can’t get a job if you don’t have experience, so there’s this sketch about how ridiculous it is.”

In addition to writing and directing the show, Koren is in four out of the six sketches, where she plays an eager-to-please intern. Junior Meredith Clarke plays the “boss lady” in most of the sketches and serves as a foil to Koren’s chipper character.

“I’m the boss that’s just like ‘No,’ and she’s excited, and I’m not,” Clarke said. “It’s just a really funny parallel of completely opposite personalities.”

Though Koren wrote the show, most of the rehearsals involved the actors giving feedback and suggestions to the script. Koren said the cast members were very enthusiastic about giving their input to revise the show.

“I wrote really good skeletons of sketches, like sketches of sketches,” she said. “I knew that when we started rehearsing, more jokes would come. It’s always better to have a group mind about it, because I can’t come up with everything that’s funny about the situation.”

As an actor, Clarke said she had never experienced such workshop-like rehearsals, but she enjoyed being able to give her suggestions and feel like she was contributing more to the show.

“It’s helped me enjoy the show more because I feel more a part of it than just a piece of meat getting told to do things,” she said. “I just feel more integrated in the whole process, and I care about it that much more.”

Though the show is largely comedic, co-director sophomore Rebecca Caplan saw a large amount of realism in the sketches.

“Every sketch has to do with a truth, it’s heightened a little bit, sort of more like a characterization, but there’s truth in it,” Caplan said. “One of the sketches is about a girl who’s trying to get face time with her boss, which is a lot of interns.”

Koren chose to write the show in sketches because she said the longer comedic format makes it easier to give a deeper point of view while still maintaining humor.

“I think it’s the balance between standup, which is like a solitary thing where you can tell a joke, and a play which is longer and has more of a story,” she said. “It’s like, this is a funny thing, here’s a point of view, and here’s us being silly of it.”