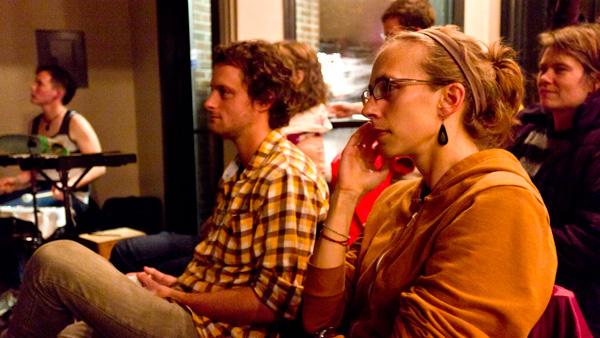 Shawn Steiner/The Ithacan
From right, Cornell University graduate students Jessica Bliss and Sam Chamberlain watch an episode of Beatrice Fairfax, a 1916 silent film shot in Ithaca, at Gimme Coffee! on Oct. 23. The event was put on by the Ithaca Motion Picture Project as a part of the Silent Movie Month.
By Emma Rizzo — Contributing Writer
Published: October 24, 2012

Opportunities still remain for Ithaca residents and visitors to step into the past this October by celebrating the silent film industry this month. The Ithaca Motion Picture Project’s “31 Days of Silents,” a series of events commemorating the 100th anniversary of the first silent movie filmed in Ithaca, continues through October 31.

Mayor Svante Myrick officially declared October “Silent Movie Month” in Ithaca on May 24 by signing an official city proclamation. Motion picture screenings, as well as various exhibits, are being held around Ithaca until the end of the month. The events are free and open to the public.

The Ithaca Motion Picture Project is a nonprofit organization that was established in 2009. Founded by Diana Riesman and Constance Bruce, the project’s purpose is to preserve and celebrate the movie industry in Central New York.

Wharton Inc. made Ithaca’s first silent film when Ted Wharton, a producer from Chicago, came to the area in 1912. Inspired by the natural landscape and the college environment, he set up an independent film studio with his brother, Leopold. That same year, he filmed “Football Days at Cornell.”

Part of The Ithaca Motion Picture Project’s mission is to promote the history of moviemaking, and the project is currently converting the former Wharton Inc. studio into a motion picture museum. “31 Days of Silents” is an additional effort in promoting this history.

“There is little-known significant history that can be brought alive,” Bruce said.

Among the historic showings, the classic silent film “The General” on Oct. 28 at Cinemapolis. Cornell Cinema will be following this event with a showing of F.W. Murnau’s “Faust” in the Sage Chapel at Cornell on Oct. 31 with a live musical accompaniment from Cornell’s music department.

Other silent films such as “Patria,” “The Mysteries Of Myra” and “The Romance Of Elaine” will show on Oct. 28 in the Borg Warner Room.

Learning about and watching historic silent films offer people a whole new level of insight into what life was like during the silent film era, Bruce said. She said that viewers can learn where society stood and especially how social life differed from how it is today.

Bruce and Riesman were struck by the focus on the social aspects of life.

“One of the things that impressed Diana and I was how advanced [the silent film makers] were in their interest in social issues,” Bruce said.

Films from the early 1900s demonstrate the status of women at the time and touch on issues such as prostitution, Bruce said. She said Wharton’s films were made in a time without women’s suffrage, and they can offer insight into the structure of society at the time.

Bruce also emphasized the distinctive nature of these films. By attending the events this month, the public can also gain an appreciation for the art of silent movie making, she said.

“With silent films, the picture has to show so much more than a talking movie,” said Bruce.

Silent films combine the storytelling element of moving pictures and the emotional element of music to create a piece of art, Bruce said. Without the luxury of sound television, they entertained audiences for years during the early 1900s until the release of the first sound movie in 1927, Bruce said.

According to the proclamation Myrick signed, Ithaca has had a strong role in the development of the film industry.

At a previous screening at Cornell University, Riesman and Bruce spoke with a couple whose farm was used as a set in a Wharton film. The focus on Ithaca-made films makes the events personal, creating a personal history for all Ithacans, Bruce said.

“The value is that Wharton Inc.’s film played a role in the establishment of the motion picture industry, and that story needs to be out there,” said Bruce. “People need to be drawn here.”

The city proclamation declares that this month, and the films and exhibits within it, will be a toast to Ithaca’s involvement in the silent film era. Residents and guests will be able to share in this celebration and immerse themselves in the silent movie experience.

“This is distinctive in history,” Bruce said. “It happened in Ithaca. Ithacans want to celebrate this.”

For a full list of events happening in “31 Days of Silents,” visit http://www.ithacamotionpictureproject.org.