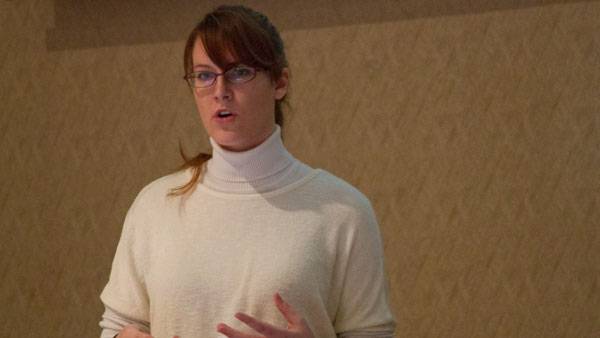 Erica Dischino/The Ithacan
Kristiina Korpus ’13 speaks April 5 at Ithacon, a comic book convention in Ithaca that was hosted at Ithaca College this year. Korpus spoke about the history of women in comic books and their controversial depictions.
By Tylor Colby — Staff Writer
Published: April 9, 2014

The genre of Japanese anime is often criticized for what some see as its poor, sexist representation of women. Kristiina Korpus ’13 gave a talk April 5 at Ithacon, a comic book convention in Ithaca that was hosted at Ithaca College this year, discussing the history of the image of fighting women in Japanese anime and how the trope is used to either empower or exploit women. However, Korpus is also a fan of the art form herself, working panels at anime conventions across the country in order to raise awareness to the issue of female tropes while treating anime shows and its fans with equal respect.

Staff Writer Tylor Colby sat down with Korpus to talk about her thoughts regarding the representation of women in Japanese anime, her thoughts on modern anime as well as her involvement with addressing the issue.

Tylor Colby: How long have you been interested in studying unequal female representation in anime?

Kristiina Korpus: I’ve been working on this particular issue since 2011 when I first took professor Katharine Kittredge’s class on science fiction and fantasy. For that class, we had to develop a conference presentation. My focus in this class was Japanese anime and manga representation of women, so I decided to present about the trope of Japanese women in anime and manga.

TC: What kind of tropes exist for women in anime and manga?

KK: There are always the bad tropes, like the damsel in distress. But also women that have very strong roles, are self-confident and self-motivated, until we discover that their agency is not actually an agency for themselves but for another usually male character. But there are good tropes as well, like women who are strong emotionally without having to be strong physically, or women who demonstrate emotional strength through physical changes.

TC: How would you say the majority of women in anime are depicted, in terms of the various tropes?

KK: The majority of anime in general is action anime, so typically you see an all-male or mostly male cast. Some of the bigger examples are “Naruto” or “Bleach,” in which the female characters show femininity as weakness to be used against them. There are exceptions like “Kill la Kill.” It’s an action anime with almost an entirely female cast. I have not yet been able to watch it, but I’ve heard critique from both sides. The issue with “Kill la Kill” is the main female characters are all fighters, but when they do their transformations, they are transformed into skimpy, very revealing costumes. And there is a lot of overt male gaze in the show, though I have heard from people who have watched it that the male gaze aspect is lessened after the third episode or so.

TC: What would you have to say about the argument that by flaunting their sexuality, the women in this sense claim power over it?

KK: That is very much the theme of “Kill la KilI,” and that’s why many people appreciate it. I can respect that argument, I just have such a hard time with the idea that you have to be OK with your body in order to be a strong woman.

TC: What actions are being taken by fans to address the unequal representation?

KK: The main problem I have with fans comes up at conventions, especially with cosplayers. You see a lot of times where a fan thinks that if a person dresses a certain way, they deserve to be touched or spoken to another way. While the fanbase in anime varies depending on the show, you see a lot of misogyny too often.

TC: Do you feel there is a growing effort on the part of animators to diversify the female roles?

KK: I definitely do, or at least I hope so, because we have seen such diversity coming up now in anime. Especially in “Madoka Magica,” which takes the magical girl trope of taking something of beauty and turning it into something of power, but also makes it something that isn’t just for young girls anymore.

TC: How do you work to raise awareness of this issue?

KK: Typically, my involvement is mostly in conventions. I do a large array of panels, helping people realize that their favorite show can still be their favorite show, as long as they can acknowledge problems within the narrative. In anime, there’s always going to be some narrative problem, and as long as we can talk about it then we’re making the issue more well known.