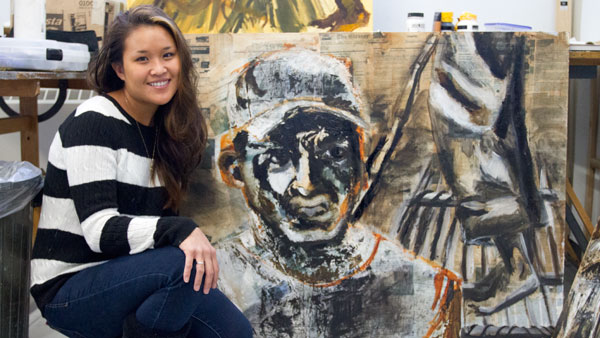 Corey Hess/The Ithacan
Senior Stephanie Lee poses with her painting Jan. 27 in a studio in Ceracche Center. Her pieces are made of newspaper and tar.
By Tylor Colby — Staff Writer
Published: January 29, 2014

When most people think of Jamaica, beaches, reggae music and delicious food typically come to mind. But alongside the tourist attractions and beautiful scenery exists another reality, one that isn’t always so pleasant: the growing socio-economic crisis facing the country. Most Americans don’t see the despair and complacency in the stolid eyes of those less fortunate.

Senior Stephanie Lee, an art major with a minor in still photography and a Jamaican native, is trying to bring these issues to light through her year-long senior project, which takes a different spin on photojournalism by blending photography, newspaper articles and painting into cohesive and striking portraits of poor Jamaicans.

At home, Lee said, she grew up seeing both sides of her environment. On one hand, she always enjoyed the cuisine and tropical weather. On the other hand, she often felt struck by the misfortune of those who had not come from as privileged a background as she. Lee is passionate about presenting the story of those who can’t afford the cost of living, let alone the education that she said she was lucky to have in Jamaica. Her goal is to create more awareness about the social and political issues that result in the rampant poverty.

Her paintings are essentially portraits of men and women in Jamaica who struggle to make ends meet, who have lost their homes and have often reverted to begging as a means of survival. The colors are muted, all blacks and gray and sometimes brown, with heavy brush strokes and minimal detail. The imagery focuses almost solely on the subjects’ faces, whose features are shaded with black tar, used like paint, to show their elongated and sorrowful expressions. The eyes, however, are depicted as smaller and more subtle, as if the subjects are trying to maintain their pride even through their struggle.

As of Jan. 6, the minimum wage in Jamaica was increased to $52.41 for a typical 40-hour week. Because of this, many Jamaicans need to work 40 or more hours per week in multiple, unskilled trades just to make a living wage. Lee said the poverty leads to crime, particularly theft, which is a major problem for the country.

“I was one of the privileged few that got to go to a private school, come to live in New York and go to school here,” Lee said. “I see what everybody else sees: where Jamaica is wonderful and beautiful, and I love the food and the beaches. But then there are people who I see on the side of the street who are beggars or gardeners, and are trying to make ends meet.”

Lee’s project began as a photojournalism exposition, but soon evolved to incorporate painting as the primary art form. She uses a combination of tar, oil paints and newspaper prints to make a layered landscape for the subjects she paints.

First, she takes 4-by-5-foot panels and covers them with excerpts from the Jamaican newspaper The Gleaner, using an oil-based medium. Lee chooses the articles based on their direct relevance to the subjects she photographs and then transforms them into oil paintings. Finally, she uses paint brushes to apply tar, shading the images she has already outlined. This results in a layered effect, which Lee said reflects the complicated socioeconomic difficulties for many Jamaicans. In one portrait she created about a river raft captain, she used articles relating to the Rio Grande, such as one about the river flooding. Up close, a viewer can read the related headlines that lie beneath the man’s tired face.

“Socially, people end up in a cycle that rarely breaks,” Lee said. “Many people only have a secondary education, and many people do not finish. Politically, I am not saying our government is not doing anything to help, but they can only do so much as a Third World country with the baggage of bad decisions from past leaders.”

Lee said her portraits are large because she wants people to think of old 4-by-5-inch photos while increasing the scale to make a more lasting impression. The newspaper articles all relate back to the specific portraits they are attached to.

“It’s turned into more of a painting thesis that does include portraits and surroundings of the people that I take pictures of, and interviews that I do with them,” Lee said. “It’s gone from being about the political issues of Jamaica to being more about cultures that we look at and the misconceptions we have.”

Lee said she is inspired by painters like David Salle, William Kentridge and Jean-Michel Basquiat. The influence is present in her paintings, which share the same dark, often politically charged, overtones for which the aforementioned artists are known.

Before beginning their projects, every senior in the Department of Art must submit a proposal to a professor of their choosing so that the professor can guide the student. Lee said she chose Dara Engler, assistant professor of art, because of her insight and dedication. The project receives weekly critique and assessment from up to 10 faculty members, but Engler serves as the chief mentor throughout Lee’s work.

Engler said she is quite proud of Lee’s decision to depict such a complicated issue through an equally challenging medium. Engler also said she believes Lee’s perseverance and work ethic have allowed her to succeed in the project.

“I think her concept, choice of media and the large scale of her project are all incredibly ambitious,” Engler said. “She tried a number of different approaches before arriving at her current process, just as a professional artist would. I’m proud of her persistence. It is resulting in a very successful body of work.”

Engler said the project has been well received by other staff in the art department as well, and Lee said she believes it has been a success so far. However, Lee said one challenge of the project is trying to capture her subjects, who often shun cameras and interviews because Jamaicans are often wary of being on camera or having their words written down. When visiting home in the summer of 2013 and during this past winter break, Lee interviewed and took pictures of her subjects, leaving only her portraits to complete.

Lee’s father, David Lee, also said he commends her taking on a topic that is not often discussed in Jamaican culture, and that he feels like his daughter will succeed in her attempt to broaden the perspectives of the viewer’s mind.

“It is my understanding that she is trying to communicate aspects of life in developing countries, Jamaican and others, in her works of art that do not necessarily come to the fore in every day thinking or communication,” David Lee said. “I have seen her grow and mature, and as a parent, it has been very heartwarming and has developed in me a sense of pride.”

Lee said while her project began strictly as a statement on conditions in Jamaica, it has shifted into a broader commentary about cultures all over the world, particularly those of island countries.

“This project, however, has many more underlying issues and has changed from being just about Jamaica to representing many other Third World countries and how stereotypes are misleading,” she said. “It represents the people that don’t have a voice, and I’m putting their story out there.”