Just ‘do it’: Collaborative art-making exhibit brings campus together 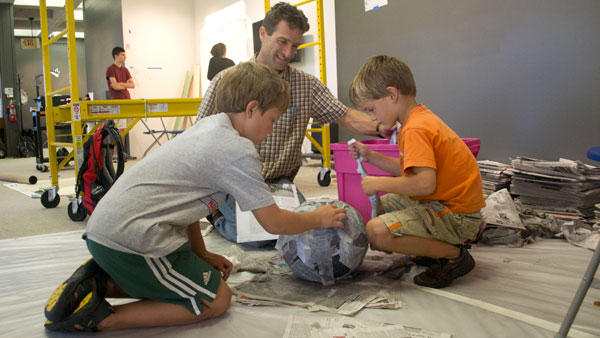 Many types of art have passed through the doors of the Handwerker Gallery, including sculptures, paintings and photographs. Now, things have changed, and until Nov. 8, gallery viewers can take control of the creative reins.

This is “do it,” the newest exhibit to visit Ithaca College. It not only occupies the Handwerker, but also outdoor locations across campus. Curated by distinguished art critic and historian Hans Ulrich Obrist, “do it” is a collaborative effort among renowned artists from all over the world, with the goal of delivering an interactive art-viewing experience.

Obrist first devised the concept of “do it” in 1993 while experimenting with ideas for how exhibits could become more open-ended and flexible. He contacted 12 artists to contribute “instructions” to different pieces of art. What came of this was the exhibit’s concept of allowing patrons to develop pieces according to instructions provided by the artists.

The prototypical version of “do it” featured instructions from 12 artists, which were circulated in nine languages. Twenty years have passed, and now the exhibit’s repertoire boasts more than 90 names, including David Lynch and Yoko Ono, though the Handwerker has only selected roughly 40 to “do.” These artists have provided “instructions” for their respective pieces, all of which are compiled into the grand collection, “do it: The Compendium.”

Following these instructions is where the true venture begins. “Do it” is less of a title and more of a command, the first step of the exhibit being the construction of the works. In what is dubbed the “laboratory phase,” visitors will be given creative license to execute the directions the featured artists left for them. Both students and community members can interact with any of the pieces and contribute to them, turning the patrons’ roles from onlookers into creators. Their finished products are then displayed for all to see. Consequently, this “do it” exhibit will be different from any other.

Senior Adrian Anderson, who interns at the Handwerker and helped prepare for the exhibit, said “do it” is not only an enriching, creative experience, but also a socially stimulating one. She said the joint effort among visitors to create art may nurture an atmosphere different from most galleries and museums.

“It’s definitely more social than a typical gallery or a typical museum experience, where people think they’re expected to have a certain behavior, which here would not be applicable, because it is a social, communal, community-type experience,” she said.

One notable piece is “Sculpture for Strolling” by Michelangelo Pistoletto, which asks volunteers to soak newspapers and mold them all together to form a meter-wide sphere that will be rolled — or “strolled” — around once finished.

Alternately, patrons can take a marker and follow Sol LeWitt’s instructions for drawing “A black not straight line…” where visitors will trace in bright colors the contour of a black snaking line that meanders about one of the Handwerker’s walls, eventually producing a cascading rainbow effect.

Senior Abigail Fink, an intern and gallery monitor, showed similar enthusiasm for the production’s social nature, especially in regard to how each individual’s contribution interacted with the others’.

“Maybe you come in, contribute a little bit, come in a few days later and see how it evolved,” Fink said. “It’s just really amazing, seeing how everyone’s contribution connected to other people.”

The college’s educators are taking advantage of this opportunity, with numerous Ithaca Seminars for first-year students and art-centric classes embracing “do it” into their curricula. Paul Wilson, assistant professor of art history, is one faculty member participating in “do it.” Wilson’s “Art Since 1960” classes will be contributing to “do it,” taking on at least two pieces. One of these is Robert Morris’s “Piece 68,” which will feature the collection and subsequent setting fire to combustible items of their choice, such as a withered rose or a sprig of holly whose berries are still attached. Wilson said getting the students out of the class and into an interactive environment made the exhibit an attractive academic occasion.

“It’s one thing to sort of study slides in class and read about artists and art history, but with this exhibit it actually gives students the chance to sort of learn about that art by doing it,” Wilson said. “That was really the appeal.”

With pieces set to appear and evolve not only within the gallery, but also around campus, “do it” has the potential to reach the entire student body. Mara Baldwin, director of the Handwerker, said she wanted to bring “do it” to campus because of its interactivity. She hopes the pieces that venture out of the display space will tempt people to visit the gallery for the full show.

“It will be nice to see pieces sprouting up around campus, not inside of the gallery itself,” Baldwin said. “We’re hoping that sort of seduces people into the space.”

So far, the pieces — notably the ones scattered about campus — have drawn considerable attention. Yoko Ono’s “Wish Tree,” where visitors anonymously tie their wishes onto a living tree, sits on the Academic Quad across from the Handwerker’s entrance. Countless wishes are tied to the branches, with some written in bouncy cursive saying, “I wish to have a bigger voice.”

Senior Carlene Doyle, who latched a wish onto one of the many branches, said exhibits of this nature grab people’s attention and succeed in luring contributors.

“The fact that it’s in the middle of campus — I feel like just looking at this just draws people over here,” Doyle said.

Regardless of who finds their way into the Handwerker, the takeaway message from “do it” is a particular sentiment that Baldwin said has survived through this exhibit since its conception.

“Art isn’t something that happens in life,” she said. “Life can be art, and life can be thought about artfully. I think that’s what Obrist and his contemporaries were thinking about when they started the show, and it’s definitely still something that’s relevant today.”