Sara Lampert Hoover, an accomplished director and choreographer, has worked on shows in many different parts of the country. After directing a show with the Vermont Stage Company, Hoover returned to Ithaca to direct “Yellowman,” by Dael Orlandersmith, at the Kitchen Theatre Company. The play focuses on Eugene, a black man rejected by his father for having lighter skin, and Alma, a black woman desperate to escape her mother’s alcoholism and poverty. Assistant Accent Editor Andy Swift spoke with Hoover about her background, what it’s like working with a small cast and how the play’s racial subject matter affected her direction. 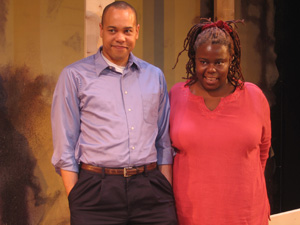 Andy Swift: Do you feel you have more of a passion for choreographing or directing?

Sara Lampert Hoover: These days I’m more concentrated on directing, but … my training was in modern dance. I got my bachelor’s and master’s degrees from NYU. I went there way back before it was even called Tisch School of the Arts many, many moons ago.

AS: What are the benefits of working on a smaller scale production?

SLH: I like working at the Kitchen Theatre because it is very intimate. Because of the size of the stage, we can’t have a cast of 25. A cast of eight seems crowded there. And when you’re working in such a small, intimate theater, you can get very detailed, very simple work. That’s why people like film acting. They enjoy that intimacy.

AS: Does that intimacy ever present any challenges?

SLH: Sometimes you’d like to have bigger production values and to be able to step back a little further. The audience can literally reach out and touch the actors. In terms of the Kitchen Theatre, you can’t hide anything. Everything has to look good up close, so it’s very challenging on that level.

AS: Was it unusual for you to work with a cast of two?

SLH: I’ve actually doubled the size I normally work with. I directed “I’m My Own Wife,” a one-man show, and “The Syringa Tree,” a one-woman show, so having two people on stage was fabulous. … But there was a new challenge: What do I do with the character who’s not talking? They can’t just be frozen, and you can’t make them disappear.

AS: What are some of the prevalent themes in “Yellowman”?

SLH: It’s about racism within the African-American community, the issue of darker-skinned and lighter-skinned people. It’s about multigenerational racism, how it gets passed down and how that mindset is absorbed almost on a cellular level. It has themes of self-hatred, questioning femininity and masculinity, and children breaking away from parents. Those reach across all ethnic and cultural lines.

AS: Was the heavy subject matter of the play ever an issue for you, as the director?
SLH: The whole Don Imus situation happened when we were in the middle of rehearsing the show. Because the show deals with race and physical features, the N-word is definitely used. There’s also a lot of talk about “nappy hair.” Suddenly I felt, as a white woman, did I really have a place to be directing this play? I had to look at my own motivations. I asked Lisa Dixon and Tyrone Mitchell Henderson and they just said, We think you’re crazy. They were totally cool with it. If they didn’t feel bad, I didn’t need to feel bad.