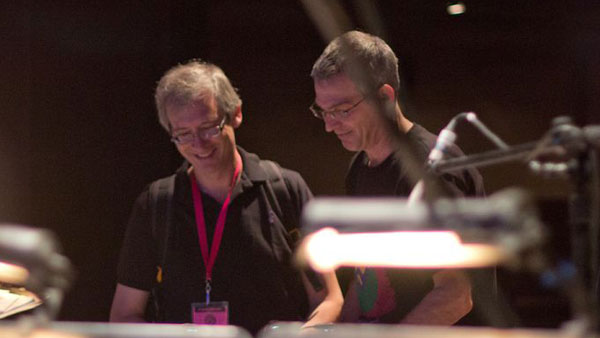 Ricardo Zohn-Muldoon, well-known composer and chair of the composition department at the Eastman School of Music at the University of Rochester, will be discussing his music and providing a lecture Nov. 19 during Ithaca College’s first Latin American Music Festival to celebrate the roots of past and present Latin American music.

Zohn-Muldoon said he lectures at events like the Latin American Music Festival to meet with composition students from the college and Cornell University. He has also visited schools like Harvard University, the University of Chicago and the National Center of the Arts in Mexico City.

During his time at the college, Zohn-Muldoon will provide a composition seminar at 1:05 p.m. and a lecture about his Latin American music at 7 p.m.

At 8:15 p.m. on the same day, there will be performances of compositions by Zohn-Muldoon, Leo Brouwer, Kaija Saariaho and Adriel Miles, and on Dec. 11 the Ithaca College Chamber Orchestra will perform “Candelabra III,” a piece composed by Zohn-Muldoon.

Staff Writer Brandon Adelbock spoke with Zohn-Muldoon to discuss his prior musical study, working with other composers and how he discovered his passion for composition.

Brandon Adelbock: Why did you choose to come to Ithaca College?

Ricardo Zohn-Muldoon: [The Ithaca College Contemporary Ensemble] is performing works of mine. I spend my artistic time as a composer, and then, sometimes, I have to get involved in organizing [events as composition chair]. I rarely perform; it has been a long, long time since I performed. They are performing two works of mine, “Candelabra III”, a work for percussion, piano, clarinet and strings. The other work is called “Flores del Viento III.” For a small ensemble, it includes flute, soprano, violin and percussion.

BA: Who are some the most renowned composers with whom you have worked or studied in the past?

RZ: I have studied with two very famous composers. The first one’s name is George Crumb, from the University of Pennsylvania. He is one of the most well-known American composers, and he is an extremely original composer. The second one is Franco Donatoni in 1989, and I studied with him all that summer. He was not aesthetically close to what I wanted to do from a composition perspective, but he was a good teacher that was critical. In terms with work, I have worked with Jorge Grossman, Juan Trigos, Carlos Sanchez-Gutierrez. I recorded a CD with David Liptak, and I think over the course of time you end up [networking] with different composers, but generally the biggest kind of connection that you want is with performers.

BA: Who invited you to come play at the college?

RZ: Jorge Villavicencio Grossman, [assistant professor of music theory, history and composition at the college], had this idea to have a Latin American presentation festival. So he invited me and Carlos Sanchez-Gutierrez from Mexico who also teaches at Eastman. We ended up here by one of those fortuitous leaps of fate. We knew each other already from Guadalajara, and then we started working at Eastman School of Music within a year of each other.

BA: How long have you studied music for?

RZ: I started when I was very young with piano lessons. Then when I was a teenager, I started to get more serious with the guitar. Around the age of 19, I decided that I wanted to compose.

BA: Did you have an epiphany when you realized you wanted to be a composer?

RZ: It was more like coming to terms with the idea that composing was something I really enjoyed doing and something I liked spending time doing. So I gradually just accepted the gift that I have.