Following his graduation from Ithaca College in 1994, Hitoshi Inoue traveled between the east and west coasts as a practicing visual effects editor, eventually scoring a position working on the film “Titanic.” But he wasn’t always so confident about his career. 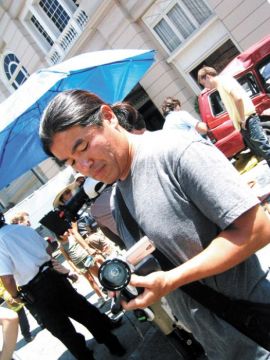 Every year, a new crop of college seniors must leave the world of academia to find their places in the working world.

The Ithaca College Office of Career Services works to bridge the gap between academia and a career, setting up job shadowing and informational interviewing, which allows students to meet with alumni practicing in a similar field. According to Career Services, an estimated 3,200 jobs and internships were secured for students this academic year.

John Fracchia, assistant director for employer relations, said he and the rest of the Career Services staff help students break up the process of building an impressive résumé into smaller, more manageable steps.

“It makes the process much less painful,” he said.

Inoue said after 200 to 300 internship applications, 400 job applications and “almost going to Kinko’s every day,” he became a film director in California, a dream he had pursued since he moved to the U.S. for a college education.

Inoue, who came to the U.S. from Japan in 1986, had little experience with the English language, so he took a few English classes at Cornell. A friend recommended he apply to Ithaca College — which led to film production.

“[Internships] are great,” he said. “They will open the gate to the film industry. If they like you they keep in touch with you, they become friends with you, then they allow you to get into this industry.”

Looking back on college life, Inoue said students often feel omnipotent, but when tossed into a career, the sense of knowing disappears and the learning is fast and furious.

“I worked on [my first] production for half a year, … [and it] taught me more than I learned from all four years of college life,” Inoue said. “Just half a year of experience will teach you so much, and under pressure you will learn the most important part of your first job — responsibility and organization.”

Kate Aldrich ’96 graduated from the college with a music degree and, after getting her master’s degree from the Manhattan School of Music, has made operatic and solo debuts across Europe and North America.

“The thing that rocks my world about opera is that it’s so incredibly expressive in every way,” Aldrich said. “[It’s] an emotion that you could not possibly say the right word to describe that emotion, the music does it for you.”

Aldrich said she appreciates the opportunities attending a smaller undergraduate school offered her during her time at the college.

“[Singing professionally is] a cut-throat career,” she said. “If I had gone to maybe one of the bigger schools, I don’t think you’d have the chance to really be in an environment that you could make mistakes and you could let yourself be vulnerable enough to learn the craft itself.”

Now, Aldrich is in San Diego performing “Maria Stuarda” by Gaetano Donizetti before she swings back home to Alna, Maine, and then to Turin, Italy, to perform as Orsini in another Donizetti opera, “Lucrezia Borgia.”

After being a visual effects editor, Inoue became a digital artist through a combination of what he calls luck and good intentions. As a digital artist Inoue would gather the “ingredients” in a shoot — elements like 3-D animation, mat painting and green screen shots — and combine them into a final edited version. To get to where he is now, Inoue trained in areas he had never encountered before, working in some cases without sleep and literally teaching himself from manuals. Inoue said the learning experience enhanced his options in the film industry.

“I try to come up with as many options as possible,” he said. “This industry is very, very small. Pretty much everyone knows everybody. Once you have a bad reputation you will start losing opportunities. You will start losing a chance to get the job, and you don’t want to choke yourself that way.”

Inoue has a few tips for students, including solid networking and having a positive attitude, that he believes are applicable to any job — communications or otherwise.

Aldrich said the important thing is to develop one’s individual style as a student and hold on to it. Since she spent so much time developing her own voice, Aldrich said she stays a safe distance from styles of singing — or lack thereof — that she characterizes as ‘boring, vanilla-flavored kind of music.’