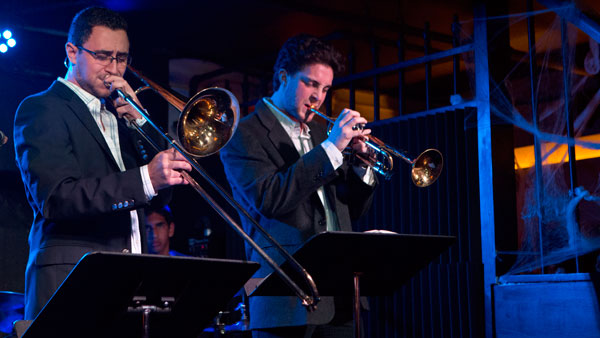 Gregory Evans, lecturer for the music departments at both Ithaca College and Cornell University, takes a sip from his pint glass. He scans the bar and stage at The Gates as he swallows and admits he practically lives at the entertainment venue located in Collegetown.

Over the past year, The Gates has become a sort of home to Evans and many other jazz performers in the Ithaca area. However, veteran jazz players are finding that college jazz groups are swinging the scene.

In 1978, Ithaca resident Johnny Russo began performing dinner piano at Rulloff’s in Collegetown. While his piano remains at the bar and restaurant, Russo hasn’t performed there since 2010.

When he first began playing in Ithaca, Russo said Rulloff’s was always a place he could count on, especially when he was broke.

“I would go up to Rulloff’s to eat, get paid and have a couple of beers,” he said. “That’s how things worked out. Just playing music for a living only 10 blocks away.”

However, Russo said he has been playing 50 percent of what he used to five to six years ago.

Despite Russo stepping back from the jazz scene, he said he still sees a great deal of talent in Ithaca, especially during the annual Porchfest.

“There are 140 bands playing over a four-hour period,” he said. “That just gives you an idea of the number of musicians here. It’s incredible.”

Evans, who has been playing drums since he was 11 years old, graduated from Ithaca College in 2011 with his Master of Music in percussion studies. He now teaches under the jazz studies department at the college, but finds it necessary to perform jazz outside of the classroom.

“When music becomes institutionalized, it loses its roots because jazz music has its roots in oral tradition,” he said. “For me to be an adequate educator, I still need to tap into that.”

And tap into it he does, often by performing with other faculty members in various jazz combos. Evans said this is integral to the jazz scene, and recently the Ithaca community has exceedingly responded to his performances.

“For some reason, this year we are really able to support jazz for the audience,” he said. “Musicians can consistently come out, and everybody as a community gets better each week. It’s become more of a community event rather than a jazz event.”

Evans’ involvement with the music programs at the college and Cornell has not only allowed him to resurrect the IC Jazz Club with junior Tom Smith, but also create a collaboration between the club and Cornell Jazz, the university’s student-run jazz club. 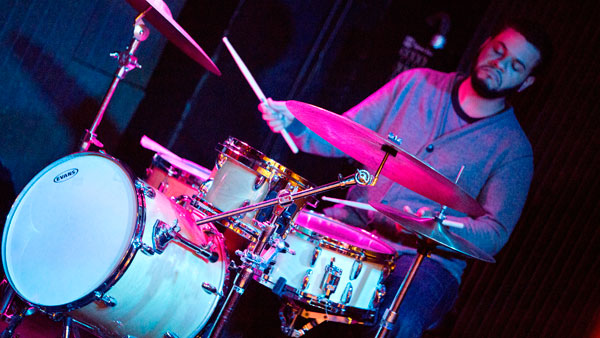 Greg Evans, jazz studies lecturer at Ithaca College and Cornell University, plays the drums during a jam session at The Gates.

Reflecting on his role as a jazz musician and educator, Evans hopes this recent musical alliance launches the beginning of his legacy.

“The jazz tradition is formed over many legacies,” he said. “I’m trying to establish my legacy for when I’m no more or when I don’t work at IC anymore. I think this a great place to start with the two academic institutions.”

Steve Brown, professor emeritus and Ithaca resident, created the James J. Whalen School of Music’s Bachelor of Music degree in jazz studies in 1988. Brown, raised by Marie Brown ’35 and Glen Earl Brown ’36, followed his parents’ lead and graduated from the music school in 1964 and again in 1967 as the first student to receive a masters degree in classical guitar.

As soon as Brown received his master’s from the college, he joined the faculty and proposed a jazz program to his colleagues.

“In the late ’60s and early ’70s, there was a movement to build jazz programs at universities,” Brown said. “At first we had a few courses, but it grew to a fully accredited jazz studies program. It was in the air at the time.”

Retiring after 40 years of teaching at the college in 2008, Brown said he commends the efforts of Mike Titlebaum, assistant professor and director of jazz studies, and Paul Merrill, a former faculty member at the college and now the Gussman director of jazz ensembles at Cornell University, for building the jazz community in Ithaca.

Smith said the relaunch of the IC Jazz Club and the collaboration with Cornell Jazz are signs that the jazz community is expanding in Ithaca. Without the encouragement from Evans and Titlebaum, Smith said local jazz wouldn’t be the same.

Titlebaum, who often performs with Evans in the Ithaca Jazz Faculty combo, said he was inspired to study jazz when he was in fourth grade and his class participated in a bring-your-parent-to-school day. A classmate’s father, who was a policeman, spoke to the class about his job, but surprised the children when he began to show off his true passion — saxophone.

“My friend and I looked at each other and said, ‘That’s the instrument I want to play!’” Titlebaum said.

Much later in life, a 23-year-old Titlebaum landed his first job at Florida A&M University in Tallahassee, Fla., where he realized he wasn’t ready to teach just yet. He said after leaving the university, he traveled to New York city to live as a musician, something he felt was necessary.

“At that time, I didn’t live to be a musician and experience the good and bad that [teaching] entails,” he said. “I needed to go to New York city and gave it a shot to see what it was like and see if I could developed my musicianship before teaching again.”

Though he continued to teach music at a variety of schools in the New York city area, Titlebaum said that it wasn’t entirely fulfilling — until he found the college, which hit all the right notes.

“Teaching wasn’t planned — it sort of happened,” he said. “It was a newfound energy. There are top-notch jazz musicians [at the college] playing and composing and are very fun to work with. It’s as great of an environment for students to be around as it is for me.”

Once re-established, Smith said the IC Jazz Club searched for a venue on campus to perform on a weekly basis. After speaking to the manager of the Tower Club Lounge, the jazz club made a deal to play at the 14th floor café every Thursday. Smith saw this as an opportunity to expose jazz to students who may not know much about the genre.

Smith said the jazz scene in both the college and the greater Ithaca community is allowing different artists and combos to mesh and evolve.

“It’s becoming a fusion of a lot of different influences,” he said. “I’m excited to be in Ithaca to experience this stuff going on right now.”

Senior Will Sigel, a member of the IC Jazz Club, agrees with Smith in that, over the past year, the jazz community in Ithaca has been strengthened and has cultivated a scene — a scene that he described as always having good vibes no matter what the venue or performer. Sigel especially admires Evans’ attitude toward performance and his musical skill. He said he could see jazz faculty, such as Evans and Titlebaum, being successful musicians in larger scenes like those of New York city.

“The level of jazz and musicianship is unbelievable when the faculty play,” Sigel said. “People are starting to realize that and come out more to chill and just listen to music.”