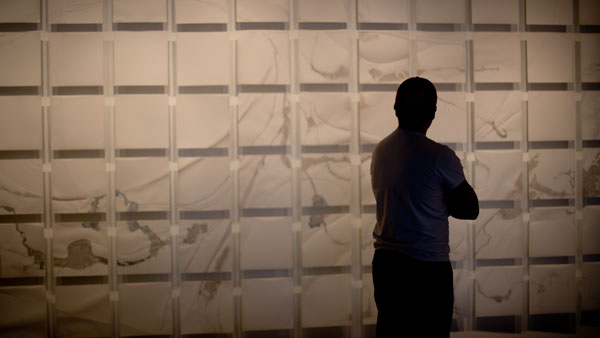 A giant graphite hand reaches for the outline of Lake Superior, its thumb and forefinger touching each other. The finger and ripples of the lake blend into one. Stepping back from her piece, Carla Stetson, assistant professor of art and artist behind the new exhibit at the Handwerker Gallery, “Aerial Reconnaissance,” adjusts her red glasses, examining her work on display.

“Aerial Reconnaissance” uses topography, or the study of maps and the earth’s surface, to explore themes of human connections to nature and events occurring in the world, especially those related to global shifts, thermal changes and natural disasters.

“Part of it is really intuitive,” Stetson said. “It’s me thinking about a global issue.”

Stetson said her decision to combine topography with drawing stems from her early interest in globes and maps. She said because the most current maps are online and lack a 3-D element, she enjoys changing or altering old maps and preserving the different types of topographical texture in her pieces.

“They make you look at the world in a different way,” Stetson said. “It makes you think about maps and what you see.”

Pushing the boundaries of stereotypical ideas is a major thread that runs through all of Stetson’s pieces; almost every single one features a continent or a section of the world, but stretched, turned on its head, ripped down the middle or completely dissected. Questioning how we perceive the earth beneath our feet was very important in the process of creating these pieces, Stetson said.

“It was inspired by both looking down through the clouds and then shifting your perspective and looking up,” she said.

Stetson’s new exhibit is combined with the works of fellow artist Patte Loper, who is also interested in environmental activism. Her show “Your Margins, Your Rivers, Your Diminutive Villages” features pieces focused on the environment and nature, specifically landscapes. Originally, Stetson’s show was going to be solo, but because Stetson broke her wrist last summer and was unable to make any more pieces for the show, Mara Baldwin, director of the Handwerker Gallery, invited Loper to create pieces for the exhibit after meeting her at the Saltonstall artist residency program in Ithaca.

Junior Elizabeth Woollard, an art education major, observed Stetson’s process of making the pieces at the college. As she watched the project unfold, she was interested in Stetson’s focus in history and topography while working with different materials.

“It looks a lot at just playing with and melding the idea of art and landscape, and I interpreted it as a different take and what you think about a classic landscape,” she said. “It’s more about layering 2-D and 3-D, playing with maps and colors and the visuals that are there.”

The bright colors pop in her piece “The Nomadic River,” featuring multicolored curls expanding and flowing away from a monochromatic map of a wandering river. Many of the works focus on parts of the world in which nature and human interaction are currently relevant, bringing to mind issues such as trying to control and blockade the natural flows of rivers.

Stetson’s exhibit was originally shown in her hometown of Duluth, Minn., last spring, and many of the pieces are injected with historical and local references to the area where Stetson grew up. Some art includes older maps of the area ripped and collaged onto the works. Baldwin said this creative style of looking at cartography adds another layer to the themes of the show.

“I think [Stetson]’s show is really radical,” Baldwin said. “Cartography has always been a male career, so what does it mean when a lady futzes with maps?”

Bill Chaisson, managing editor at the Ithaca Times, has previously worked with cartography and wrote an accompanying essay to Stetson’s exhibit, describing it as juxtaposing the ordinary with the apocalyptic.

This apocalyptic motif is common throughout the exhibit as larger environmental themes are scattered among the works, especially speaking to issues of pollution, the shrinking ozone layer and hydraulic fracturing. In one of her works, South America is ripped, and pieces of the continent are repositioned on a stark background, representing the deforestation of rainforests and questioning what roles society plays in this destruction. Stetson also takes advantage of different materials including paint, graphite, paper, stitching and maps to create collage-like works.

“Texture is really important for me,” Stetson said. “But I think all of this is drawing, regardless of material.”

The fusion and combination of materials Stetson used for her pieces speaks to the larger themes of environmental concepts and problems that she sees in the world, both in her own experiences and discussions with others. These varied elements were something Baldwin found interesting.

“There was really an intimacy in the making of these,” Baldwin said. “They explore the surface of the earth and its entropic relationship.”

Focusing on art education was also a large theme in most of the pieces. Stetson worked to figure out how art, nature and history have all interacted as the world, and the perception of the world, has shifted over time. She used mostly older maps to question how the globe has changed, even from a few years ago, to how people know, or think they know, it now.

Even though the Handwerker Gallery offers a different display than that which was available at the Duluth exhibit, Woollard thinks the on-campus gallery offers an interesting and balanced place to showcase the works.

“It allows the viewer to step back and look at the piece as a whole and have one experience and step closer, go in-depth and have a different reaction or experience than you would at first glance,” she said.

Stetson hopes to eventually continue with her exploration of mediums and concepts in cartography. She plans to expand on the pieces by working with a geographical scientist to study and create more in-depth works involving connections to history and nature, but for now, these ideas are explored on the walls of the Handwerker Gallery. She hopes her exhibit will inspire viewers to reflect on their connections with and influences on the environment.

“I hope these are things that some people might think about,” Stetson said. “It’s the idea between us and larger natural connections.”