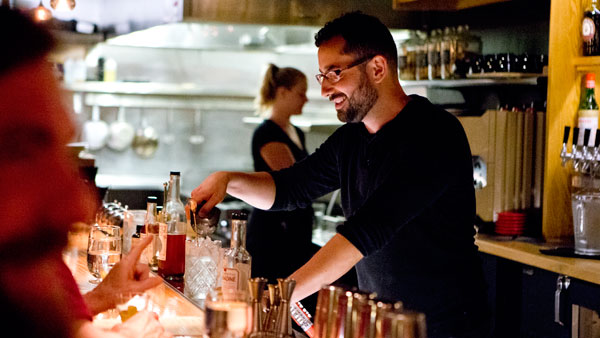 Mercato Bar and Kitchen’s red and white awning fits snugly in between the many restaurants that decorate North Aurora Street, while its quaint exterior allows passersby a tempting view into its dining quarters.

Inside, vintage prints adorn the walls. They hang above the seating areas, advertising Campari liqueur, Gancia wine and a host of other drinks. Each of Mercato’s square tables are set neatly, the silverware rolled snugly into napkins, ready to be unraveled. The atmosphere feels warm under the room’s amber lighting as diners muse over their dishes.

Behind a generous bar that spans the right wall of Mercato’s space, barman Manny Flores curls away two ribbons of lemon zest. He clenches the peels between his fingers, squeezes them over two brimming glasses and drops them into the liquid — the finishing touch for the Gem, an elixir of bourbon, Bärenjäger honey liqueur and lemon juice, which is one of the many classic cocktails Mercato offers.

Flores is no stranger to the art of the cocktail or the dining scene. The 34-year-old from Long Island, N.Y., has more than 10 years of experience in the restaurant scene. He has previously bartended at the Gramercy Tavern in New York City. When he isn’t working at Mercato, Flores operates Ithaca’s own Belly, a self-proclaimed “indoor food truck,” known for both its nachos, donuts and meat dishes, open Thursday, Friday and Saturday nights at Lot 10.

Yet Flores finds his fame behind the spirit-lined bar of Mercato, where a following of loyal bar-goers are ready to sing his praises each Monday night. Warren Schlesinger, associate professor and chair of accounting at Ithaca College, who enjoyed a drink Monday at Mercato with Jim Markowitz, a retired Cornell University professor, said the secret to Flores’ acclaim is the connection he makes with his customers.

Flores’ exuberance is evident as he busies away behind the bar, engaging patrons as they enjoy their drinks. Flores said before craft comes hospitality — having regular customers is vital to a healthy bar.

“Any bar is only as good as the people that return,” Flores said. “People come and go, but bars are about folks coming back. It’s great to have high-quality ingredients, but if you can’t have that hospitality, it falls short.”

Flores’ passion has ties back to his youth. He said his father, who worked as a barman at the top of the World Trade Center, has given him pride in bartending.

“I’m proud of the fact that my old man was a bartender before me,” Flores said. “To me, the bar was a place that men worked, and so that was something I looked up to. It was a special place.”

With such prowess in cocktail making, the term mixologist comes to mind. However, the barman prefers to distance himself from such trendy titles. Flores, who likes to drink an Old Fashioned, said the classics are his niche.

While the theme of old-fashioned drinks is signature of the bar, Mercato owner Eric Trichon ’98 said the social aspect of bartending is something Flores takes on with finesse, and that it draws customers into Mercato to enjoy their wares.

“Part of being a bartender is putting on a show … that’s something he does very well,” Trichon said. “You’re an actor, you’re on stage, you have to put on a show. That’s why they come.”

But it’s not all mingling for Flores. He said a vital part of being behind the bar is perfecting the craft. Trichon said Flores’ understanding of ingredients is invaluable to providing quality service.

“Just being familiar with ingredients and how they interact with each other — you want all the ingredients to be balanced,” Trichon said. “You need the palate for that, which Manny has.”

Flores’ aptitude with flavor allows customers like Schlesinger and Markowitz to explore new flavors, all at the barman’s discretion.

“We’ll occasionally come here some nights just to taste different kinds of drinks,” Schlesinger said. “There are some times where we say to Manny, ‘Just make me a drink.’”

Customers tend to put their trust in Flores to concoct a quality beverage when they’re hankering for something new. Todd Schack, assistant professor of journalism at the college, said he regularly visits Flores at Mercato because of Flores’ proficiency in crafting alcoholic drinks.

“If you just want to drink your gin and tonic, he’ll make a good gin and tonic,” Schack said. “But if you want a properly made Sazerac, he can do that and tell you the history of the Sazerac. That’s why he’s hands down the best bartender in Ithaca.”

Schack, for whom Mercato’s off-menu cocktail the Dutch Sailor was first made, said he’s able to learn about what he’s drinking from Flores, who is a cocktail historian and fluent in its language.

“He’s also a real — what I would call a cocktail archaeologist,” Schack said. “He studies the history, he knows the stories, he knows not just where they came from and how to make it; he knows the funny things behind them.”

Flores said he regards the cocktail bar as a vital piece of Americana.

“The cocktail is the the quintessential American creation,” he said. “Here in the U.S., we’re so used to bumping up with other cultures.”

Though he is ranked supreme among his patrons, Flores still maintains his modesty. He said he ultimately values the relationships he forms between his customers above all else.

“I’m most proud of that whole relationship with the customer,” Flores said. “When you can just get to know your people well and feel that you took care of them — that at the end of the night that they got what they needed … That’s what we’re going for.”