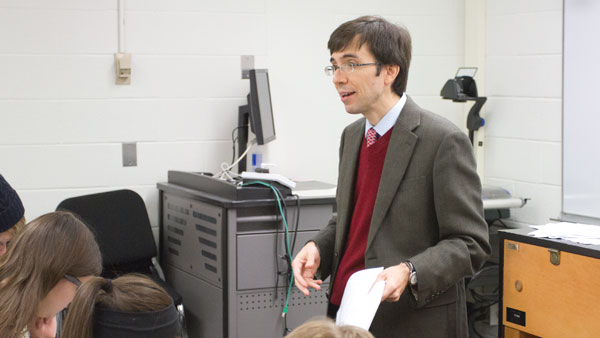 Every year, the Fromm Foundation chooses 12 composers around the country to write an original piece of music. The foundation gave the prolific composer $12,000 to create a composition with Brazilian-Canadian pianist Luciane Cardassi.

Accent Editor Evin Billington sat down with Grossmann to discuss his past work, music experience and plans for the Fromm commission.

Evin Billington: How long have you been composing music? When did you realize it was what you wanted to do?

Jorge Villavicencio Grossmann: Since I was 14 years of age. I guess the thrill in the idea to create my own music, rather than just playing other composers’ music. I’ve been playing music since I was six. I played piano a little bit and recorder, and I started on the violin, so I was a violinist for a long time without thinking that I would become only a composer, but then I had a hand injury and I couldn’t play anymore, so it was pretty much the only option I had, to become a composer.

EB: What elements or influences do you typically bring to your compositions?

JG: A lot of the influences happen really at a subconscious level, I think: all of the music that I have listened to since I was a child and all the music that I have gotten to know throughout the years. But yeah, I have certain admirations for composers in the 20th century that have been my idols, like [Arnold] Schoenberg and [Igor] Stravinsky. And then earlier than that, [Gustav] Mahler and [Johannes] Brahms and, of course, [Johann Sebastian] Bach and [Ludwig van] Beethoven. I have studied their music very thoroughly, so I’m sure that has had an influence on the way I write my own.

JG: It’s a very long process to write a new piece, because it’s one note at a time, and I write everything by hand. Of course, then I sit down at the computer and use a digital version of the score, what we call engraving, when you transfer whatever you write by hand into something that looks like a score. Because the process of composing for all composers, not just for me, is a process that takes a very long time. You write one note at a time, and when you have to write a very large score, you have to orchestrate it and write for sometimes 100 instruments … so I try to imagine the entire piece in my head first, and then come back to it in my head several times until it’s established there, and then I hear the piece and write the actual notes.

EB: What was the application like for the Fromm Music Foundation? What did that entail?

JG: You have to submit a project, meaning I had to submit a proposal for a piece I would like to write. For that, of course, I had to have a performer or performers who were already committed to performing this once I finish it. So I had worked with a Canadian-Brazilian pianist [Cardassi] before, and my project was to write a piece for solo piano and electronics. So I spoke with her, and she was very enthusiastic, so she supported the project and told the Fromm Foundation that she would be very happy to perform my piece, and of course together with that proposal, I submitted samples of my previously composed music, and the Fromm Foundation analyzes all of those proposals and selects a few that will be rewarded this commission.

EB: What happens next now that you’ve been awarded the commission?

JG: I have to write the piece. But I’m given a time frame to do that, and once I finish the piece, the Fromm Foundation also takes care of the premiere of the piece. They’ll have some funds to put together a performance, but that’s not necessarily going to happen in this country; it could happen anywhere in the world. We have a very long time frame, but I don’t think I’m going to use all that time — I think from two to three years until the time of the premiere.

EB: How far along are you with the piece?

EB: What would you like to say to students who aspire to be composers?

JG: This is exactly what I believe is so important for the School of Music, the college and the students, for the students to see how interesting and exciting a composer’s life can be. Because a lot of parents, when their kids say, “I want to be a composer,” they’re very afraid of what that entails, what’s going to happen from a practical standpoint. I think if there’s commitment and there’s dedication, you can have a very fulfilling and interesting life as a composer. Not necessarily winning awards as the objective, but just having the opportunity to write compositions and hearing them performed is just an incredible reward. The composer’s life can be very, very rewarding if there’s enough work put into it.