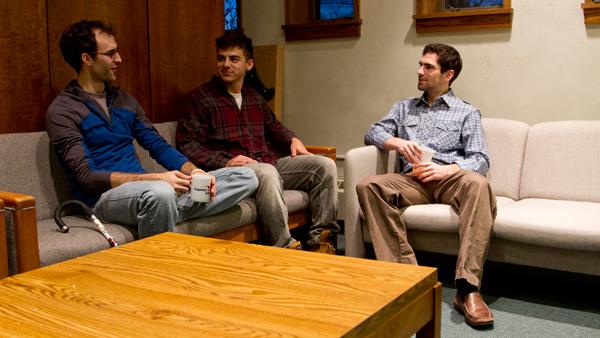 Senior Suleyman Yoruk wasn’t afraid to admit to a group of seven of his male peers that he enjoys openly discussing what it means to be a man, or rather a human, in today’s society.

On Oct. 30 in Muller Chapel, LeBron Rankins, Ithaca College psychologist of counseling and wellness, facilitated the first meeting of the new group, Guy Talk. The club allows men from the college community to come together and discuss what it means to be a man in today’s society. Rankins said gender-based stereotypes, discrimination and apathetic attitudes are shattered during these meetings — it’s strictly males conversing about everyday issues.

“It’s not a place to hear what’s right or wrong but to hear how different people
think,” Rankins said.

In the second meeting Nov. 6, the group of men spoke about male to male friendships and the unwritten rule in which men are not supposed to speak about emotion. Senior Chris Accardo said Guy Talk helps get rid of these stigmas.

“The division of masculinity we put up entirely drops, and we can talk to each other not as men, but as people,” Accardo said.

Accardo said the purpose of the group is to give guys a safe place to communicate their experiences as a self-identified male and to figure out whether the experience one male has is shared with others.

“Oftentimes I learn that your experience is a shared one,” Accardo said. “There are other people with problems with identity. A big part of it is learning.”

Yoruk, one of the founders of Guy Talk, said it’s important for men to know who they are as a person.

“When they see each other, they only have this certain language that they carved out from watching media, from observing friends’ behaviors, role models … so it’s not them,” Yoruk said. “They’re not being their own men. It’s important to be your own man.”

Yoruk said the Guy Talk meetings are comfortable and honest, and he would like to see men on campus grow and feel more comfortable having meaningful conversations with one another. Though the group has a goal itself, Yoruk said he has a goal of his own.

“[Guy Talk] helps me reach out to other men and let them know that it’s OK to create a space outside of Guy Talk where you can talk,” Yoruk said. “The goal of the group personally, for me, is to create more spaces around campus where guys can be guys and talk.

At the first meeting, the group spoke about identity and where males fall on the spectrum of masculinity. Rankins said there are many unwritten requirements to the male identity.

“You’re a man if you do all these things,” Rankins said. “If you don’t do all those things, then what? If we become the man box, that limits us from being other things as well.”

The “man box,” according to Rankins, is a drawn box of male characteristics. Mocking the typical thoughts of conventional society, Rankins explained the attributes of being inside and outside of the Man Box.

Stephen Sweet, associate professor of sociology, said it’s beneficial to know that personal troubles can be public issues, which is one of the goals of Guy Talk.

“One of the things that I think is productive from having these personal encounters is that people understand that their personal experiences are common experiences,” Sweet said. “You get this collectivity going, and then this personal problem is not just a problem for [you], it’s a pervasive problem for many people.”

Guy Talk is different from conversing with friends, Rankins said. He believes when hanging out during leisure time, friends would rather not be burdened by heavy topics.

“This is our time to just hang out and be chill,” he said. “Let’s leave the heavy conversation, so I don’t have to feel frustrated with my friendship group if they’re not willing to engage in those deeper, more meaningful conversations.”

“Guy Talk” meets at 5:15 p.m. every Tuesday in the Phillips Room in Muller Chapel. For more information, contact LeBron Rankins at lrankins@ithaca.edu.