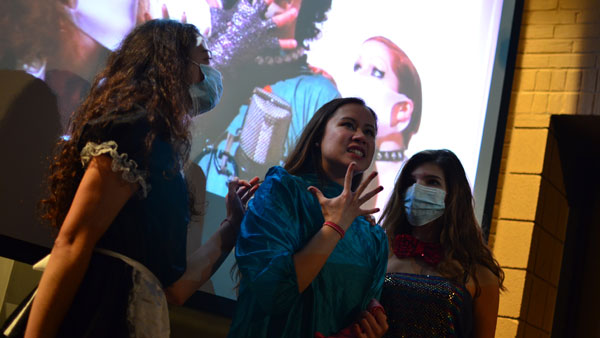 The October weather is cooling down, but as Halloween approaches, Williams Hall is heating up. Ithaca College students are stripping down to nothing but lacy corsets and panties reading “spank me,” strutting in platform heels and wearing fishnets and thongs. Anywhere else, this attire may be received apprehensively. However, for the cast of “The Rocky Horror Picture Show,” this is just another night of rehearsal.

Fans of the cult phenomenon can head to Williams 225 to watch the Macabre Theatre Ensemble perform a shadow cast of the 1975 film. The showings will take place at 9 p.m. and midnight Oct. 25 and 26. Macabre performs many shows involving horror, comedy and science fiction. As a result “The Rocky Horror Picture Show” falls neatly into its repertoire, said the co-director, junior Maxie Mettler.

“This is a huge production,” Mettler said. “It’s kind of been leading up to this.”

Mettler has been with Macabre since its launch in Spring 2012, performing in and writing many of its productions. This year, she is co-directing “The Rocky Horror Picture Show” with senior Casey Phillips. Before Macabre took control, IC Players produced the musical for the last five years.

The story follows the adventures of Brad (sophomore Samantha Guter) and Janet (senior Brooke LeWinter), a recently engaged couple that wanders into a strange castle after experiencing car trouble. Inside, they meet Dr. Frank N. Furter (freshman Judelle White), a transvestite from Transsexual, Transylvania. Furter creates the hunky Rocky (sophomore Nuria Hunter), an attractive monster in skimpy metallic gold shorts looking for love. Throughout the film, the cast has many wild adventures involving seduction, mad science and a cabaret-style finale.

“It’s definitely a new experience,” White said. “It’s fun to delve into a new character that’s not typically played by a woman, especially being so young.”

For the “Rocky Horror” virgins, a shadow cast is a screening of the movie that has actors shadowing the characters of the film on stage. While the film is playing on a screen behind them, cast members, known as pets, respond to the film with witty commentary, such as jabs at Janet’s love life and Brad’s seemingly pompous personality.

“They see all kinds of people of different shapes, color, sizes, sexualities and genders dancing half-naked and feeling beautiful and loving themselves,” she said. “People come and see that and are inspired to feel the same about themselves.”

During the show, the pets will act and dance within inches of audience members, wearing nothing but sexy undergarments. Junior Meredith Clarke, who plays a pet, said by the end the show, the pets plan to get the audience to disrobe as well by breaking the fourth wall and seducing them.

“We try to get you down to your underwear, so when we’re messing with you on the desks we’re on equal playing fields,” Clarke said.

The cast as a whole became a family throughout the course of rehearsals, White said. The first three days of rehearsal were dubbed “Rocky Boot Camp,” and it encouraged the cast to open up to one another. The group watched a screening of the film, becoming more acquainted with themselves and the themes of the movie. Phillips said this helped the group connect as a cast.

“It’s so much more beneficial if you’re really comfortable with the people around you, and they all got to know each other in that way,” Phillips said.

Guter said the non-traditional “Rocky” performance, one theme being the majority of the principal male roles are played by women, will keep audience members on their toes.

“The thing about ‘Rocky’ is it’s not a classical theater experience,” she said. “You’re a part of the show as well. I’d really like the audience to absorb the energy and come away feeling a little bit freaked out but kind of excited.”

The Macabre Theatre Ensemble will be selling tickets to “The Rocky Horror Picture Show” from 9 a.m. to 4 p.m. on Oct. 23 and 24 in Campus Center. Tickets will also be sold at the door.