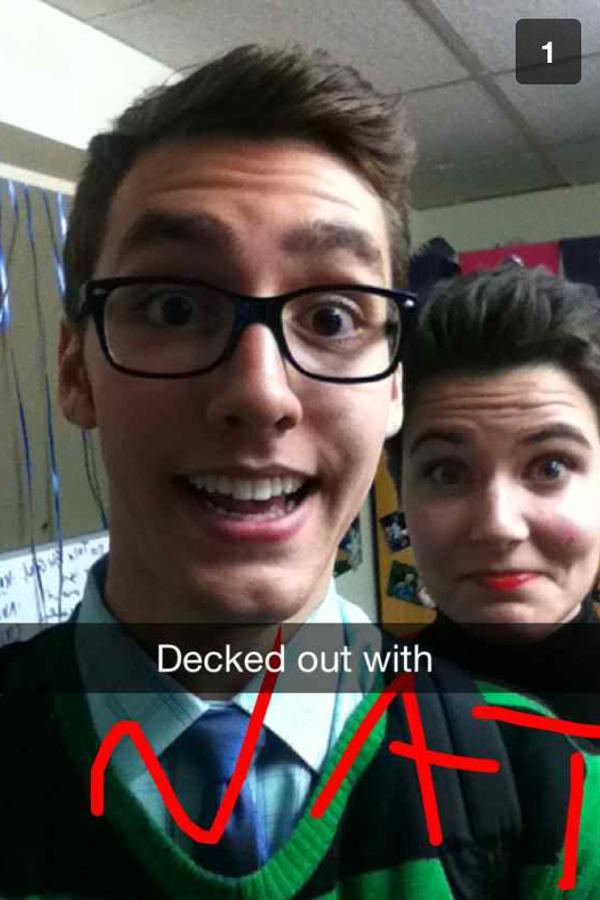 While walking to class in the School of Business, junior Lindsay Kingston raises her iPhone to eye level and presses the blue circle on her screen. Kingston admits to taking and sending many “selfies” like these on a daily basis. But unlike a typical photo message, Kingston’s face will disappear from the receiver’s phone in 10 seconds or less.

Sweeping the Ithaca College campus, Snapchat is a photo-sharing application that allows users to take photos and send them to anyone on their friend list. The catch is the sender must set a time limit from one to 10 seconds before sending the image out. Once the receiver opens the photo, time begins counting down, and eventually the image is wiped completely from the Snapchat server.

But the app’s beginning was not as simple as point and shoot. In the spring of 2011, Stanford University student Evan Spiegel stood up in his product design class and pitched the app to his fellow classmates. After explaining that the photo-sharing app sent photos that self-destructed after 10 seconds or less, Spiegel said his idea was turned down by the students.

“They said the app was a terrible idea, and people would use it just for sexting,” Spiegel said. “So we went ahead and created Snapchat anyway.”

Spiegel, the 22-year-old co-founder and CEO of Snapchat, said he and co-founder Bobby Murphy felt social media was boring and people were “putting on a show” by presenting a superficial image through online profiles. While it began just as a social experiment, Snapchat now has more than 10 million users sending a combined 20 million — or more — snaps a day.

Within that growing number of users are Ithaca College students who use the app, like Kingston. Junior Megan Downes found out about the app from one of her friends, who strongly suggested she download it. She said she finds herself snapping the occasional “selfie” as well as things she comes across while reading the news.

Spiegel said this social behavior is what the app is intended to maximize.

“We believe that Snapchat brings people together in a really unique way,” Spiegel said. “Nearly everyone we talk to uses it to communicate with their friends.”

Though he is busy finishing up his degree in product design, Spiegel still finds time to snap his friends. He said that though this popular app has been pleasing the masses, he made Snapchat for his own entertainment.

“I didn’t make this product for just you to use it,” Spiegel said. “We are obsessed with the thing. It’s hard to express how much love we put into this product.”

While many publications and websites are focusing their attention on the potential for sexting, Spiegel said that’s not the app’s intended utility. He attributes these claims to the lack of effort he and his team have put in to get their story out to the public.

Despite Team Snapchat’s lack of marketing, Kingston said she sends “nudies,” or naked selfies, as a joke — but never with the intention of gratification.

“I enjoy sending nudies through Snapchat,” Kingston said. “My friends can tell you I’m not lying. But, I wouldn’t send them to boys and be like, ‘Look how good looking I am.’”

Cyndy Scheibe, associate professor of psychology at the college, focuses her teachings on developmental psychology and media literacy. She believes the reason why sexting is becoming more common is because people aren’t face to face with their consequences.

“It seems distant,” Scheibe said. “It seems to be something that would not have any implications for how people think of you, how you’re perceived as a gender and have a long-term effect on your life, even though it certainly would.”

Scheibe can see how Snapchat may “whet your appetite” and how the photos can be sexually intriguing. But even so, she said she thinks users are naïve if they think that anything put out in cyberspace is truly going to disappear. Anyone who has a hold of this technology, she said, is going to find their way around it.

“While it may seem flirty on some level, would you just flash somebody by opening their dorm door real quick and run away?” asked Scheibe. “And that’s even more safe because they wouldn’t have a permanent image. But really, would you do that?”

For now, students like to simply connect with friends. Sophomore Ben Weger uses Snapchat to communicate with his girlfriend Morgan while they are away at their respective colleges. He said that if the photo calls for it, like a recent one he received from his friend, he’ll take a screenshot for memory’s sake.

“I received one of my roommate’s girlfriend while she was in class and clearly bored,” Weger said. “Also, when my girlfriend makes a funny face, oftentimes I’ll screenshot it.”

Likewise, freshman Sam Russell uses Snapchat to stay in touch with friends from high school and family back home in Connecticut. He said he finds himself snapchatting at least 10 times a day, usually in moments of boredom.

“It’s one more thing to do when I have nothing else to do,” Russell said. “So I send a picture of myself or something I’m doing at the time.”

Russell said Snapchat comes in handy when updating his sister and mother about what’s going on while he is away. He finds the time limit on the photos to be one of the most interesting components of the app, allowing the images to truly be snapshots of his life.

“It’s cool to have something you know is impermanent in an age where everything is permanent,” Russell said.