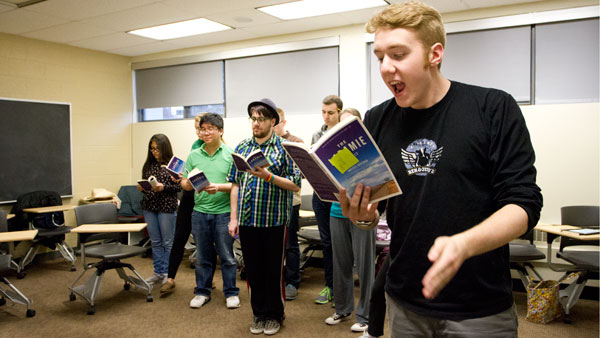 IC Greens will perform “The Laramie Project,” written by playwright Moises Kaufman, with members of the Tectonic Theater Project, a professional, award-winning theater company, April 24–26. They will also perform a companion piece, “The Laramie Project: Ten Years Later,” on April 27. All four performances will be held in Textor Hall.

Based on a true story that takes place in 1998, the original play is about the reactions of the townspeople of Laramie, Wyo., to the murder of Matthew Shepard, a gay student at University of Wyoming who was tied to a fence and beaten to death because of his sexuality. Shepard’s death and the resulting play helped bring attention to the lack of hate crime laws in America and rallied supporters for gay rights.

Members of the Tectonic Theater Project went to Laramie in 1998 after hearing of Shepard’s murder and conducted interviews with residents of the town. “The Laramie Project” is a dramatized reading of those interviews, along with the project members’ notes and official reports on the murder.

Through theater for social change, more theatrical companies are taking a stronger stance in political advocacy. Kelly, who came to the college as a theater major before switching over to politics in pursuit of a degree that would enable him to effect more positive change in the world, said the combination of politics and theater will help the show gain more attention.

For Kelly, it isn’t strange for a political organization like IC Greens to venture into theater. Kelly acted in “The Laramie Project” twice before in high school and said he chose the play because it covers controversial topics, such as homophobia, that people tend to avoid publicly discussing.

“We hope through the Greens Theater Project that some minds will be changed about political views, hopefully for the better, to create a more equal climate and a more non-violent world,” he said.

“The Laramie Project: Ten Years Later” takes place 10 years after Shepard’s murder and features dramatized versions of the follow-up interviews conducted by the Tectonic Theater Project with members of the town who were interviewed in 1998.

Freshman Aaron Roberts is acting in both plays, playing Matthew Shepard’s father, the town bartender, and a Catholic priest. Roberts said “The Laramie Project: Ten Years Later” is slightly more modern than its companion piece and addresses how the people of Laramie have changed, or haven’t changed, over the years.

Roberts said the theme of religious tolerance throughout the two shows really hits home for him. His favorite character to play is a Catholic priest who opposes the typical stereotypes of his religious profession. The priest emphasizes to his congregation how the people who committed the murder serve to teach them all how to be better people and how to love one another. He was also one of the organizers of a vigil for Shepard after his death.

“He sticks by his guns,” Roberts said. “It’s really cool because at the beginning you’re like, ‘Oh, a Catholic priest. He’s going to be one of the people who’s negative about this whole issue,’ but he’s actually one of the most vocally positive characters in the play.”

While Roberts is not an official member of IC Greens, he said he saw an audition flyer posted on one of the bulletin boards around campus and was immediately interested in joining the production because of the show’s positive reputation. He said the show consists of about 60 characters that have been assigned to a 10-member cast of students.

Roberts also said the cast has been rehearsing three times a week for two to three hours at a time over the last six weeks to perfect the show. He said he believes it’s important for potential audience members to know while the original play is about a terrible crime, the show itself is not depressing.

“There are a lot of emotional and poignant moments, but it’s not a sob story,” he said. “It still has a very hopeful and uplifting message, and you definitely leave the theater with a changed perspective on things.”

Samantha Maddaloni, the IC Greens vice chairperson, said she hopes “The Laramie Project” will help to extend IC Greens’ message of acceptance and non-violence around campus. She said she is hopeful students from different departments will see the play and want to get involved with the organization.

“The success of ‘The Laramie Project’ will only fuel the momentum of our organization as a whole,” Maddaloni said. “I don’t see us slowing down. We’re a group of students who come into every meeting with progress to report and five new ideas to pitch.”

A percentage of the proceeds from “The Laramie Project” will be donated to the Matthew Shepard Foundation, while the rest will allow IC Greens to initiate more theater for social change shows in the future and further promote equality on the college’s campus.

“People should come because they want to help stop tragedies like the death of Matthew Shepard … because nothing like the atrocity that happened to him should ever happen again,” he said.