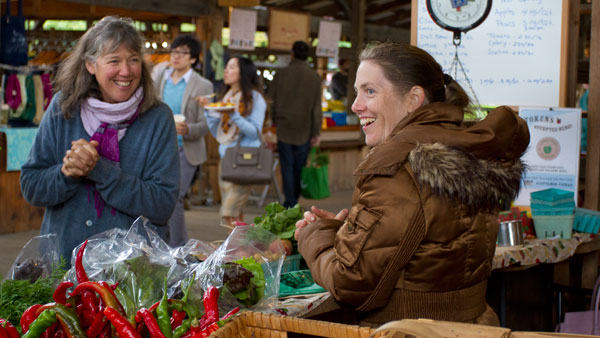 It’s 8:45 on a crisp, cool Tuesday morning. Local farmers gather at Dewitt Park, one of the new locations for the Ithaca Farmer’s Market. There, they pitch tents and arrange pumpkins to catch the eyes of passersby. The midweek market will not open for another hour, but the vendors are hard at work, organizing displays for their products.

From April to December, students and families can join community members at three different locations in Ithaca for fresh, locally grown harvest. The Farmer’s Market’s primary location at Steamboat Landing attracts the largest crowds on Saturdays and Sundays. To meet the community’s growing interest in buying healthy and sustainable foods, the market has expanded to two additional midweek locations in Dewitt Park and East Hill Plaza. Additionally, the Farmer’s Market will be set up in the wintertime from January to March at the Space at Greenstar, 700 W. Buffalo St.

Junior Vanessa Dunn said visiting the Farmer’s Market on the weekends is one of her favorite activities.

“It’s a really great way for artists and farmers to get together and share what they make with the people of Ithaca,” Dunn said. “You’ll see so many different kinds of people there, like families, children and people that look like they stepped straight off the farm.”

Dennis Hartley, co-owner of Littletree Orchards, rests on a crate after setting up his display. He has been in the apple-growing business for 40 years and continues to rise with the sun at 6 a.m., preparing for a day of selling his home-grown produce at the Farmer’s Market.

However, Hartley is not alone. Many other vendors are up bright and early to harvest their produce and bring it to the Farmer’s Market. Booths feature different kinds of food, including apples, squash, pumpkins, corn and other fresh fall harvests. On the weekends, shoppers can get a taste of international dishes at stations featuring Japanese, Thai and other Asian cuisines, in addition to produce from Ithaca’s farms.

Established in 1973, the Farmer’s Market has never failed to provide local vendors with dependable consumers searching for delicious, seasonal products. Originally located on South Fulton Street, the market had five different homes before permanently settling at the Steamboat Landing in 1990. Though it has changed locations, the Farmer’s Market’s mission remains the same: to allow Ithaca’s residents to maintain healthy lifestyles while supporting local farms.

The farms represented at the market are family owned and operated, so vendors often take more pride in their products, Hartley said. The vendors are also all within a 30-mile radius of Ithaca, ensuring the produce remains local. All their food is grown in sustainable, low-spray environments.

Aaron Munzer ’08, assistant market manager of the Farmer’s Market, said he loves seeing the students come out to the markets because the food can benefit them. The Farmer’s Market allows these students to take a break from dining hall food, fast food and processed food, and incorporate freshly grown fruits and vegetables into their diets, he said. It provides these same benefits to everyone who chooses the locally grown produce the market offers, he said.

“It’s the kind of place where you leave with food, and you really feel good about it,” Munzer said. “This food is coming to you from five to 20 miles away, as opposed to thousands of miles away.”

In addition to managing the Farmer’s Market, Munzer owns Plowbreak Farm, which is one of 51 farms that participate in the Community Supported Agriculture program, an initiative that also connects students and Ithaca residents with locally grown produce. CSA is a model in which farms offer fresh, local produce to community members at an affordable price. Consumers pay upfront and receive a weekly supply of locally grown fruits and vegetables in return.

Dunn is an active participant in Early Morning Farm’s CSA. Each Thursday, she and her housemates head over to the Ithaca Coffee Company to pick up their bushel of local fruits and veggies. CSA members choose which local farm they want to support.

“It’s very personal,” Dunn said. “They really care about making sure that the participants in the CSA know what they’re getting and know what to do with the vegetables.”

In the past 40 years, Hartley has seen the Farmer’s Market cultivate as a single seed and blossom into three larger crops.

As the Farmer’s Market expands, it continues to provide patrons with opportunities to develop relationships with their neighborhood farmers, which produce the local harvest they love so much — and possibly even inspire them to become farmers themselves.

“You can farm a five gallon bucket with one tomato plant,” he said. “That’s farming. It’s on a very small scale and a very personal scale.”