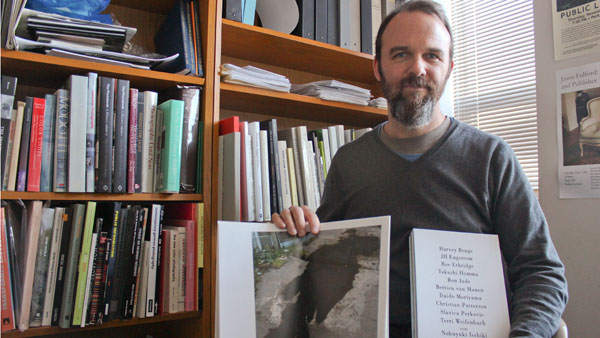 Ron Jude, internationally recognized photographer and associate professor in the department of media arts, sciences and studies, released his most recent work Nov. 14 in an internationally collaborative photobook. His photobook is one of the 10 in the Super Labo project, entitled “Lost Home.”

Each photobook is inspired by the prose poem, “Lost Home,” by the award-winning Japanese screenplay writer, Nobuyuki Isshiki. The photographers were given the poem to respond to through their own interpretation.

Staff Writer Tylor Colby spoke with Jude to discuss his work in “Lost Home,” his means of creating a photographic theme and his plans for future works.

Tylor Colby: “Lost Home” recently was noted as one of the best photography books of 2013, according to TIME magazine. What are your thoughts on that?

Ron Jude: We just launched it in Paris three weeks ago. These “best of” lists come out, and they start to come out right after Thanksgiving. Fortunately, it was released early enough to get seen by some key people. Everybody goes to Paris Photo, so it was seen by a lot of people and apparently caught the eye of one of the photo editors of TIME, so that was nice. It always helps with sales, too, to make the list.

TC: What is it like putting together a collaborative photography book?

RJ: We keep using the term “collaborative work” when we talk about this piece, but in fact, there wasn’t a whole lot of collaboration. It was all done very independently. There were two photographers in the group that I happen to be friends with. We shared our books with each other and gave each other feedback, and so I knew that they were up to it based on them sending me PDFs, and I would give them feedback and vice versa. Otherwise, it wasn’t like we were all sitting at a table, talking to each other about what we were doing.

TC: As a collective work, though, is there an overarching theme presented between your work and that of the other photographers?

RJ: I don’t think it’s just because the title is “Lost Home,” and I don’t think it’s just because of the tone of the prose poem, but there is a tremendous sense of loss in all 10 of the pieces in 10 very different ways. And I suppose, to some degree, that it does come from the nature of the prose poem and what the story was about that we’re reading. There’s very little crossover, in terms of subject matter … The way they were put together and sequenced in a book form generates a similarity in tone, and a similarity in this overall sense of loss.

TC: You have said your recent works focus on “rediscovery of a meaning” in life. Is this still a present theme in “Lost Home?”

RJ: The narrative structure of “Lost Home” isn’t altogether different. It’s trying to take these disparate elements that are very ambiguous on their own and find a narrative thread through the whole thing.

TC: Your images usually seem to encapsulate a very finely tuned idea or expression. Was this challenging in terms of responding to a prose poem?

TC: Is there anything else you are planning to work on for the future?

RJ: I’m opening an exhibition at my gallery in LA in January, and, happily, I’m finished printing as of last week. What I really want to be concentrating on, though, is a project I’ve been shooting for the past couple of years in the Southern California desert. I’m hopefully getting it into book form by the end of next year. It’s called “Lago.”