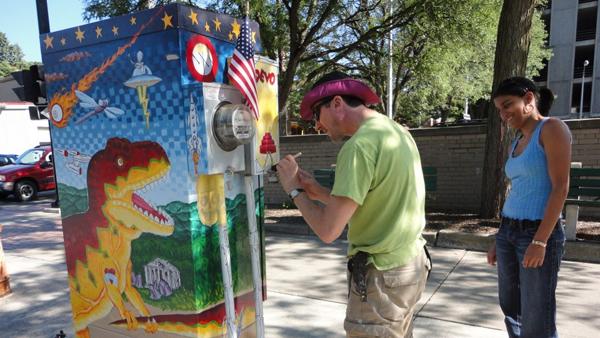 Courtesy of Caleb Thomas
From left, local artist Kurt Piller paints an electrical box on the corner of Aurora and Buffalo Streets while Janaki Parthasarathy, of Ithaca, looks on. Piller’s box was a part of the “21 Boxes” project.
By Evin Billington — Staff Writer
Published: October 10, 2012

A police car slows to a stop in front of an electrical box on the corner of Buffalo and Aurora Street.s. The officer inside observes the image of a mighty, dark red and yellow Tyrannosaurus Rex surrounded by UFOs, astronauts and swamp monsters.

The officer calls to Kurt Piller, a local artist, who is in the middle of painting the once drab and ordinary gray box.

“Excuse me,” the officer said. “Best one in town.”

The city of Ithaca is no stranger to public art, with many of the town’s walls bedecked with colorful murals and the streets surrounding The Commons lined with sculptures. Recently, PAC has sponsored three new public art efforts — “21 Boxes”, a mosaic mural on the Seneca Garage by local artist Annemarie Zwack and an upcoming mural in the Cinemapolis parking garage by Sean Chilson.

On Oct. 4, Jason Otero and Caleb Thomas, commissioners of the PAC, came to Ithaca College’s Handwerker Gallery to present and discuss the recent changes to Ithaca’s public landscape. Otero said he wanted “21 Boxes” to bring more art to the streets of Ithaca.

“The idea is to have art be as ubiquitous as possible, and so the ability to take these very utilitarian gray boxes that are seemingly everywhere and turn them into canvases just seemed like a natural expansion of the idea,” Otero said.

Otero said he believes public art is a relatively cheap way to spread art throughout cities and increase tourism, and it can also increase the quality of life in a city.

“The fact that you could walk down your block and see a beautiful canvas sitting right on the edge of your street is really compelling,” Otero said.

Sean Chilson, an artist who participated in “21 Boxes,” and who has done murals in the past, is optimistic about the future of public art. He said it opens up the forum for all artists, especially graffiti artists, to share their art with the community in a more mainstream way.

For a project like “21 Boxes,” the artists are given a small stipend that mostly pays for the materials they use. PAC received this money from a grant from Tompkins Charitable Fund. Piller said he did not mind the low pay for his work in the project.

“At some point, I just realized that this is a labor of love, and I’m doing it because I enjoy doing it,” Piller said.

Often stopping passersby while he was working, Piller said he thrived off of the public aspect of this project and asked many people for their input or suggestions.

“A lot of the elements on the box are actually suggestions from people walking by,” Piller said. “It was like, ‘Oh of course, how could I have forgotten — there’s no Cylon warriors or an Easter Island head,’ I actually really enjoyed engaging with people.”

Artist Ryan McGuire’s box, which Otero called irreverent and hilarious, was painted to look like a block of cheese with silhouettes of action-hero style mice repelling down it. The bright yellow box was located on the site of the farmer’s market, occasionally halting McGuire’s progress on the box.

“Interruptions is a positive and a negative, I guess you could say, because people want to know what’s happening — but of course it’s taking into the time,” McGuire said. “It probably took about — when it was all said and done — about a week and a half to two weeks to finish because I was kind of restricted.”

Inherent in all public art is the fact that it is open for anyone to see and also to modify. Otero says that graffiti is an ongoing concern, especially for murals, but that often graffiti artists have a respect for fellow artists and avoid tagging those pieces.

“Within a graffiti culture there’s a kind of code about their own ethics about what they do and don’t deface,” Otero said. “I think we’ve been fairly fortunate that artwork hasn’t been terribly defaced.”

However, Chilson does not worry about his art being tagged. He said graffiting can and will happen because public art should not be made to last forever.

“When it comes to street art and traditional street art, you didn’t paint it so it could be up there forever,” he said. “You painted it so you could have that spot for a moment.”

Exposure is key to preserving Ithaca’s public artwork, Otero said. With the recent projects and murals, PAC has been gaining more support from the public and the city government, Otero said.

“Exposing what we’re trying to do for other artists lets the people know that this work needs to be protected and it needs to be maintained,” Otero said. “We need the budget to do that, and we’re working with the smallest budget — it’s practically non-existent.”

Though the budget is small, the city has grown more supportive of public art, despite some initial uneasiness. Now Otero looks at PAC and the city’s relationship as collaborative, he said.

“I like outdoor art because it gives you, as an artist, the most exposure possible and in a positive way,” McGuire said. “If you’re only hanging in galleries, you’re basically only hitting art critics and art enthusiasts, which are great, but they’re less likely to get excited about your art.”