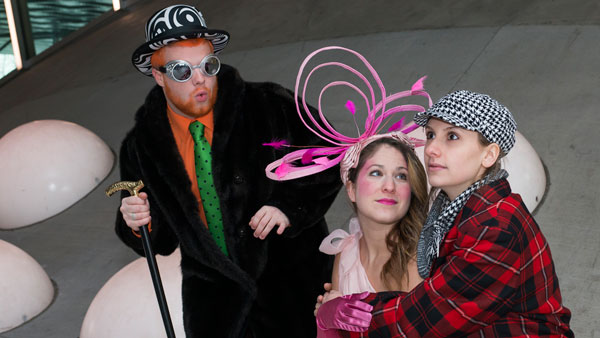 In a whimsical kingdom far, far away, the perseverance of love is tested in a comedic twist on a classic fairy tale story incorporating opera and American musical theater styles.

Coming to Ithaca College Main Stage Theater, “L’etoile” is conducted by Brian DeMaris, assistant professor of music performance and director of opera, and is directed by Jeanne Slater, a guest from the Juilliard School. Junior theater major Timothy Rheiner is also an assistant director. The operetta, written by Emmanuel Chabrier in 1877, premiered at Offenbach’s Theatre des Bouffes Parisiens in Paris.

The play follows the story of King Ouf (senior Eric Flyte), whose 40th birthday is just around the corner. Every year on his birthday, tradition calls for the execution of a prisoner by the king. Unfortunately for King Ouf, the jail is empty as his birthday approaches. In his plot to find a person to execute on his birthday, the king looks to trick someone into publicly defying the government.

DeMaris said the plot is driven by an outrageous selection of comedic encounters and situations, juxtaposing traditional views of opera.

“There’s a tendency to approach opera as high art, and then there’s a moment when you have to acknowledge that this opera is not high art,” DeMaris said. “But that’s the point: This opera is complete silliness.”

The kingdom’s constitution also requires that the King provide an heir to the throne upon his 40th birthday. Herisson de Porc-Epic (senior Chris D’Amico), an ambassador from the neighboring kingdom, and his wife Aloes (sophomore Ariana Warren) decide to bring Princess Laoula (senior Shelley Attadgie), daughter of the king in this neighboring kingdom, to King Ouf and marry them to provide an heir to his throne.

During the journey to King Ouf’s castle, Princess Laoula falls in love with a peddler they encounter named Lazuli (junior Rachel Ozols). When the two arrive to the neighboring kingdom, the king meets the peddler and gets him to speak badly about the government, deciding to execute him. Just as he is about to be executed, the court astrologer says the peddler and the princess are fated by the stars — if the peddler dies, the king will die a day later.

DeMaris said the operetta grows comical as the princess and the pauper’s happy ending is challenged by powers out of their control.

“It’s really about love and death, but very humorously treated, if not irreverent,” DeMaris said.

DeMaris said the translation of the opera from French to English caused some challenges. Because it is rarely performed, the musical scores were difficult to find and required some searching.

DeMaris said he found help from various different colleagues and rented the orchestra scores from the Cincinnati Symphony Orchestra.

Because the show has been translated entirely into English, Attadgie said, the message of the show has become easier for the audience to understand and follow along without having to read what is happening off a page, as often happens in a traditional foreign-language opera.

Slater said she hopes the translation of the dialogue and the music will also help reach a wider audience.

“The great thing about this show is that it’s incredibly accessible,” she said. “The humor, I think, is both physical and in the words, so it would appeal to a larger range of ages that would get the overall humor of the piece.”

Since auditions in September, the cast has been preparing a show that portrays themes of destiny and fate through a farcical opera. Slater said an important theme through the play is believing what the stars, or fate, predict.

“In the end, there’s nothing really to it, but it still ends with them actually believing that the stars tell you your fate and that’s what you need to depend on,” Slater said.

This theme of destiny told through the stars is enhanced with appearances by the court astrologer, reminding the audience and the characters that the Princess Laoula and Lazuli are fated by the stars.

D’Amico said vivid color of the costumes was an important part of the play as it distinguished different characters from one another. King Ouf wears a neon orange and acid green costume, Herisson and his wife sport purple and blue costumes and Princess Laoula wears the classic princess pink throughout the show.

“Everyone has a very specific look, and we’re almost color-coded,” D’Amico said. “The more high status you have, the more colors you have. You’ve got the color telling the story and the music telling the story.”

A fairy tale–love story may be common, but “L’etoile” incorporates opera, dialogue, humor, a strong ensemble and a colorful set to tell the story about the strength of love.

The Ithaca College Main Stage Theater production of “L’etoile” opens at 8 p.m. Feb. 20 and will run until Feb. 23 in Dillingham Center.