Rapping it up: Freshman rapper relays personal narratives through music

He gestures like he’s in conversation, though it’s not clear who his raps are aimed at. He accentuates the syllables of his words, the beats of his rhymes, like he’s trying to emphasize his point. In a way, he is. As he raps he paces in tempo, a purposeful wandering back and forth between his bandmates playing the drum set and piano. He nods his head slightly, cloud of blown-back black hair bouncing as he moves. He does not venture far from the instruments, though Presser Hall in the James J. Whalen Center for Music, usually intended for a full orchestra rather than a hip-hop group, has more than enough space for him to roam.

He steps onto a five-inch-high platform in the middle of the instruments, and finally he pauses. His lanky arms extend from his sides and he circles them around like a lazy windmill in time with the notes coming from the piano and the tap of the drums.

It’s hard to tell that behind his square, brown, tortoise-rimmed glasses, his eyes are closed, as if sleeping. But then he stops rapping and stops moving, waiting patiently for the rest of his band, composed of four skinny and rather scruffy-looking freshmen guys, to catch on to the pause. They notice and drop out slowly, leaving the beat hanging in the air in anticipation of a downbeat that isn’t coming.

For the first time, there’s near silence as freshman San Williams gives instruction to his band — specifically, to his drummer, Jim Landahl, who he calls Jimbo.

He turns to point at each of them as he says their instruments.

“Is there anything that will be an initiate to that other than the lyrics?” Landahl asked, slumped slightly on his stool, drumsticks resting lifelessly at the rim of his snare drum.

The two argue, politely, for a minute about whether or not Landahl will be able to hear the actual lyrics during a performance.

“I don’t know,” Williams said, possessing little of the movement and swagger he showed while rapping as he studied Landahl. “You can tell by, like, my body motion usually.”

Landahl’s new to the group, a replacement for a drummer who favored a more punk style over a hip-hop one. He’s still getting used to the backing beat of many of the songs.

Eventually, Landahl begrudgingly takes Williams at his word for the time being: He’ll know when to drop out. 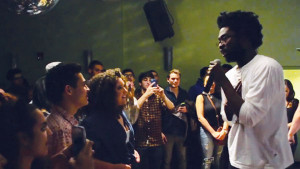 This rehearsal took place a little more than a week after Williams and his former band members played at the South by Southwest music festival March 7–16 in Austin, Texas. Playing at a major music festival is a huge accomplishment for any musician, let alone a 19-year-old, but Williams stays pretty tight-lipped about it, citing the experience as good, if a bit crazy.

In order to get him and the five other members of the band down to SXSW, Williams launched an Indiegogo.com campaign with the help of his friend, freshman Luna Olavarria Gallegos, to help pay for their airfare and food. The fundraiser successfully raised $1,130, enough to pay their expenses. Once they got there, the band played twice, one 30-minute and one 45-minute set.

Though they did not perform much during the festival, freshman Jesse Rolfe, Williams’ friend who plays synthesizers and keyboards in the band, said actually performing music became a much greater focal point of the group during the festival.

“It was kind of like a fantasy … everything was music 100 percent of the time,” Rolfe said. “Before that, we’d have practices that would be, like, an hour or two a day, but once we were there it was all the band, all the time. It was interesting to have that kind of motivation and productivity.”

Olavarria Gallegos said Williams’ reluctance to talk about the festival is not unusual, as he rarely talks about his music at all.

“First of all, he doesn’t tell anyone that,” she said, laughing.

In fact, she didn’t even know he had a rap career until after about a month of friendship, when she typed his name into Google and came across his SoundCloud page.

“I knew that he wrote, but I thought he just wrote poetry or something,” she said. “I heard all his music, and I was just like, ‘What the f—?’ I just did not know that he was a musician.”

She and Rolfe locked themselves in a dorm room for a day to listen to Williams’ songs on loop, incredulous that their friend had kept his talent from them.

“I remember Jesse being like, ‘It’s the best thing since Yeezus!’” she said. “We were just really surprised and in awe that he didn’t tell anyone he was such a good musician.”

But that, Olavarria Gallegos said, is just how Williams operates. She insists that he’s not shy, just initially awkward. After she got to know him, she realized how funny he was, but also how thoughtful.

“He just has all these different parts of him that he hides for some reason,” she said. “He’s just the goofiest, weirdest, funniest person ever. But that’s mixed with super introspective, serious, inner thought. He consumes everything and reflects on it a lot. That comes out in his music too.”

There’s an overarching sadness mixed with a defiant anger in many of his songs, often reflecting on his tough childhood and the oppression he sees in society. Williams is intensely raw, particularly in the mellow, classic rock–reminiscent “#tears.” He reflects on race and violence, rapping, “Let’s count the bodies/ I count six/ Ugh!/ Bullet to the head that’s seven/ Hip-hop martyr, rest my soul, close my eyes, hope I go to heaven.” 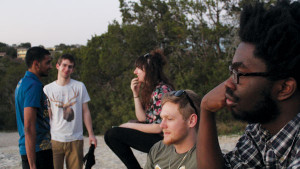 Freshman San Williams and his band relax on the beach during the South by Southwest music festival, where they played two sets. Williams is a rapper who utilizes non-traditional hip-hop instruments like cello in his music. COURTESY OF JESSE ROLFE

Williams’ music transcends genre. While there’s always that core of hip-hop, he often utilizes other instruments that aren’t usual staples of rap music, like cello or piano. That’s really what he aims to do, to avoid being boxed into one genre, restricted in any way. Olavarria Gallegos said he once joked that’s where Kanye West screwed up — defining himself by one genre.

“Hopefully, by the end of my music career, if that’s a thing, I’ll be known for my own sound,” Williams said. “I’ve listened to so many different musicians, I try to sponge everything in. Hopefully, if they put my music up on iTunes, they’ll struggle with putting it in a certain genre.”

One style of music Williams first absorbed was Bob Dylan’s. He is not necessarily influenced by the singer’s folk style, but rather his storytelling ability.

“One of my favorite songs is ‘Hurricane,’ and he talks about this black guy who was falsely accused,” Williams said. “His ability to capture that moment and different perspectives of that is something I want to be able to do.”

“Hurricane” is about Rubin “Hurricane” Carter, a professional boxer who was charged with the murder of three people during a robbery at the Lafayette Grill in 1966 in Paterson, N.J. He, along with a man named John Artis, were found guilty of the murders, but there were many rumors that the verdict was racially motivated. After meeting with Carter in prison, Dylan wrote this protest song.

Like Dylan, Williams uses his songs to tell stories. Many of his lyrics are based on personal experience, telling the story of his familial struggles. When he was nine, his father was arrested for selling drugs and sentenced to 20 years incarceration, leaving Williams’ mother alone to support him and his sister, which is the narrative in his song “Air.” In third or fourth grade, he said, he barely saw his mother because she was so busy working and in school getting her doctorate in psychology. This made him angry and self-dependent, and he said he often lashed out at her.

“She was the only one that was there that I could blame,” he said. “And then as I grew older, I realized I couldn’t blame my mom or my dad, because my dad did what he had to do to feed me, and jobs weren’t a thing that was readily available, so he had to do what he could. My mom also did what she could to make sure we could get by, and I think she did a good job.”

His dad is still incarcerated, though Williams said his father is doing well given the circumstances. Eventually, his animosity toward his mother faded and, to his initial surprise, she has been extremely, almost annoyingly as he said, supportive of his career.

“They’ve backed me up more than I would have expected them to,” he said. “My mom is, like, too supportive, to the point where she wants to go to meetings with me when I’m meeting with people. It’s kind of embarrassing.”

His mother, Jacqueline Williams, said she was surprised when she found out about her son’s budding rap career because when he was a kid, he felt rap music went against his Christian faith.

Before his arrest, Williams’ father owned a recording studio in Atlanta, Ga. It was not a huge studio, but it recorded many famous rappers, like T.I., before they became successful. One day, Williams’ parents tried to get him and his older sister to record a remix of a popular Trick Daddy song. Williams can’t remember exactly what the song was about, but he recalls a few lines about him going to Chuck E. Cheese’s.

After recording, his parents had it mixed and mastered, but the 3-year-old Williams put his foot down before it could be released, citing his beliefs.

“He actually told us that he didn’t want to be a part of that particular song because it wasn’t the Christian thing for him to do,” Jacqueline said. “It blew all of our minds.”

Williams’ father let it go, but Williams said he remembers his mother putting up more of a protest before giving in.

His beliefs were shaped in large part by his grandmother, who is a strongly religious Baptist Christian, going to church every Sunday and teaching Williams about her faith. His devout attitude has faded some, but religion is often mixed in with his lyrics, still a part of the personal stories he tells in his songs; nearly all of them mention religion in some sense, with biblical references or allusions to God, however that’s rarely the main focus.

Williams said one of the reasons he was so surprised at his family’s support was because his lyrics are so open about his past. Jacqueline said that doesn’t bother her, or at least, she doesn’t think it does.

“I think life should be an open book,” she said. “I think, whatever you’ve done wrong in your past, you should learn from it. If you don’t learn from it, then that’s something different … I’m okay with him exposing whatever. He probably feels maybe I’m not, but he should know that I’m proud of him.”

Despite his success so far, Williams is not sure if he’ll continue to rap in the future because he is still figuring out what he wants to do. What is certain for him, though, is that he will continue to strive to better society.