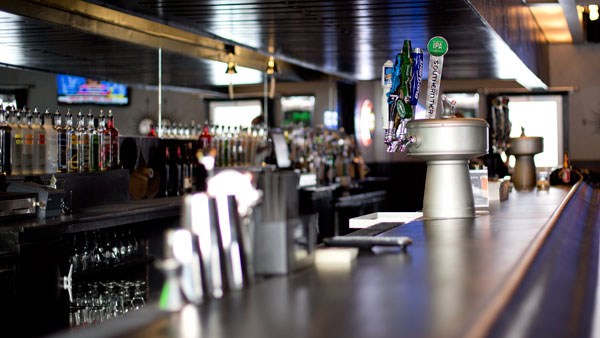 Orlando Leon/The Ithacan
The Dock, a music venue and bar, opened Feb. 24 on the southern tip of Cayuga Lake. It aims to provide an upbeat atmosphere to customers and host concerts for local and signed artists. The first band that performed was M-Eleven.
By James O'Hagan — Contributing Writer
Published: April 2, 2014

Tucked away on the southern tip of Cayuga Lake is Ithaca’s latest addition to its popular bar and music scene, The Dock. Formerly a lounge called Castaways, The Dock is a rock ‘n’ roll bar with a modern feel featuring lustrous, black interior and large, glass doors to illuminate the space. A large stage faces a sizeable space for audiences and a wall-to-wall bar stocked to serve its thirsty guests.

Jason Sokoloff, the owner of the tavern and an Ithaca local, talked about opening a new venue for years with Eric Lee, the bar manager. Lee said The Dock looks to preserve the same upbeat atmosphere that was found at Castaways, including regular concerts for local and signed artists, but in a refurbished space.

Castaways was known for its fun, informal atmosphere, but it lacked the interior maintenance — a leaky roof, rotting pipes — to stay open, as it closed in late April 2012.

The Dock went through six months of renovations before opening its doors Feb. 24. These renovations included an entirely new PA system, a new plumbing network complete with granite countertops in the bathrooms, glass doors to let more natural light into the building, a new ceiling and a window that opens from the bar to a deck overlooking the lake.

Lee said he is no stranger to working in the high-paced environment of a bar. After 25 years of service industry employment in Ithaca, he said he is incredibly excited for the future of the bar he helped establish, stressing the team’s desire to live up to the location’s longtime recognition as a venue and bar, and to become even more successful than previous establishments that have occupied the space.

“This building has an incredible history of being a live-music venue, and we want to continue that tradition and maybe take it to the next level,” Lee said. “Our goal is to make this spot the premier music venue in Ithaca.”

The bar opened its doors with local rock act M-Eleven on Feb. 24 and shortly after had its first gig featuring popular rock band Jefferson Starship on March 20. The Dock has the help of Dan Smalls, a talent buyer in Ithaca, to help create an environment larger than Lot 10 and smaller than The Haunt, both local bars and music venues.

“We’re working with Dan Smalls and The Haunt,” Lee said. “It’s a cool new scene that’s starting just now to develop. Ithaca has always had a cool music scene, it has been dormant for a little while now, but we’d like to bring that back. For a small place, there are a lot of talented musicians that come through here.”

Castaways was a popular student hangout, and some students have been flocking to The Dock in similar fashion. Senior Leo Oliva used to hang out at Castaways before it closed and said he was thrilled that the spot he had come to love was reopening under a new name.

“The new owners have clearly gone out of their way to improve all the facilities and infrastructure in the space, and the vibe is definitely cleaner,” Oliva said. “For anyone like myself who had some of their best memories at Castaways, it is impossible to shake the same dive-bar feeling, but the overall atmosphere is, by far, more respectable and clean-cut.”

Oliva said his favorite part about the new space is the retreat-like location and warm atmosphere, which was also found at Castaways, but is now nicely designed and more customer friendly.

“The dance floor and stage are very intimate, making any live music experience special,” Oliva said. “The massive back porch always has an awesome scene of people, and the bartenders and staff are super friendly.”

Junior Danny Minogue is a hostess at The Dock and has enjoyed hearing the customers’ reaction to the new bar so far.

“It just seems like everybody is excited to have this building back,” Minogue said. “[Customers] go right out to the dock and talk about how many times they’ve sat out on that dock under how many different names.”

Minogue said the staff is equally excited to be a part of the new establishment, and they are all working to make it a fun music bar and to bring back the nostalgia of its former years.

“The crowd here has been all about the music,” Minogue said. “The sound system is great. You can hear it from all the way in the back just like you’re right up front. All the bands have talked about how great it is too. We’re all really excited.”