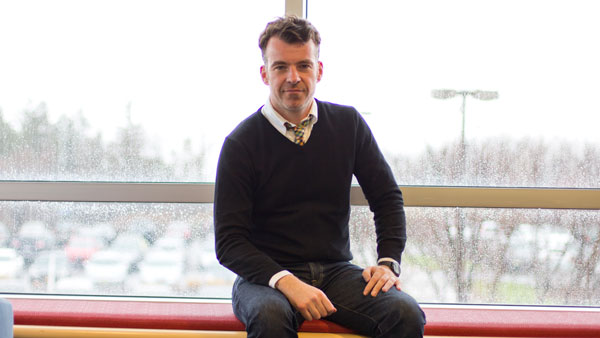 From People Magazine to Bloomberg Businessweek, publications are embracing the art of data visualization — informative illustrations of collected data. Pages of text are being swapped out for graphs, diagrams and infographics to provide succinct, informative data analysis. However, none of this is possible without the creative minds crafting these visuals and ensuring the information is accessible, accurate and attractive for audiences.

The Roy H. Park School of Communications welcomed Cass Spencer, an award-winning art and creative director, April 15 to present his lecture “Data Visualization: A conversation about design, magazines and journalism in the era of big data.” During his visit, Cass also spoke to classes and media groups about his experiences in the magazine industry.

During his career, Spencer has held numerous positions directing the creative flow of magazines, including Cosmopolitan For Latinas, and recently launched Dr. Oz: The Good Life. Assistant Accent Editor Steven Pirani sat down with Spencer to discuss his creative process, data visualization and the role of the Internet in data analysis.

Steven Pirani: Did you enter the field with the intent of crafting data visualizations? Or was it more of a natural process?

Cass Spencer: I come from a creative background, and doing magazines, and the natural course of things, is that they would move into more infographic areas and more dealing with data in that format, particularly going online. I think probably the crucial bit was in People Magazine — we created the first magazine app, and we realized very quickly that we needed to be more interactive to allow people to get more value from the app itself. … We started to realize that the release of data through interaction is a lot more immersive. If you’re allowed to discover that information about what the story is, the retention is a lot deeper for the reader.

SP: Was there a degree of adaptation or transition when focusing on more interactive, data-driven pieces?

CS: Well, one of the things I talked about in my presentation, and in some of the lectures I’ve done, is about how journalism has changed. It used to be you had the key story, and you get your idea for the story, then you gather the data as part of your job as a journalist. Then, you add weight to that story. Now it’s changed. It’s about getting data, analyzing the data. Something one of the guys in the Wall Street Journal called it was “interviewing the data.” So you interview the data, and the data tells you the story. That’s almost the role of journalism now, that’s where the future of journalism is.

SP: When you approach a project, for instance the magazine Dr. Oz: The Good Life, which you basically designed from scratch, how do you approach it?

CS: I’m laughing because it’s Dr. Oz, and I used to joke when I was helping them launch that, saying, “You could put him in a chicken suit and he’s going to sell magazines.” But it’s like any project: You’ve got to understand who’s going to buy it, or what kind of person is going to buy it, or why they want that in their life. It’s about understanding your demographic … Then you think, “How do we design for that group?”

CS: Traditionally, to get data and information, for instance from the government … you would have to write to the government, and they would send you a form back which would have all that information in it. And since the last 10 years, people realize that people are putting data more and more online that you can access … So the terminology is really directed at that, the fact that big data is how the world is working more and more.

SP: Do you think the Internet is going to play a further role in data visualization?

CS: I think it will, because it’s just the most successful way of actually displaying that information — to put some of that stuff into print, it probably wouldn’t covey so easily. A lot of that stuff you need to be able to zoom into it. The Internet allows you to have that process. … It’s just about the only platform that actually is successfully able to visualize the information.