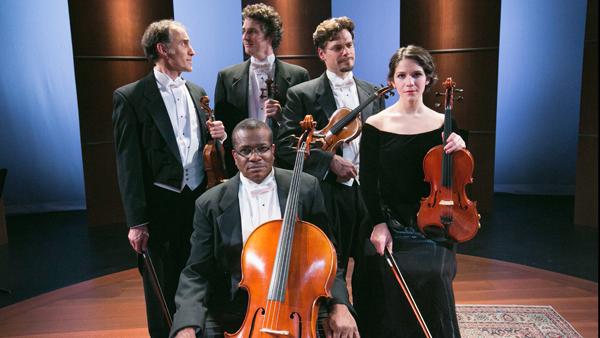 The Kitchen Theatre Company’s second play in its 2012-13 season, “Opus,” deals with the internal tensions and problems that befall the world-renowned string group, the Lazara Quartet. The performances of the actors shed light on the world behind the scenes of chamber music and on the creativity and personal clashes between members of a music organization.

When Dorian (Brendan Powers), a genius violinist who suffers from mental health conditions, goes missing, the rest of the members of the quartet, Elliot (Samuel Kaplan), Alan (Jesse Bush, ’95) and Carl (Alexander Thomas), hire an inexperienced violinist named Grace (Alison Scaramella) to take his place for their next performance — a televised ceremony at the White House.

The play’s format is a mix between flashbacks and present day, with the characters occasionally talking to the audience as if they are answering questions in an interview. This stylistic choice is successful in showcasing the quartet members’ charismatic but sometimes convoluted personalities. The plot heightens the struggle to balance work and a personal life. The play also puts the destructive nature of mental illnesses in the spotlight through Dorian and illustrates the link between creativity and mental illness.

The production has a superb cast that brings Hollinger’s vision to life. Each character has a different personality that adds spice and fire to intense debates middle-aged men have over who is a tad out of tune, or playing too strong or too soft. The slight nuances in the portrayals of these rich characters adds depth to the plot, and the use of the whole stage is useful in developing an element of intimacy with the audience. The audience is not merely a spectator of the story, but it also travels with the show into the world of chamber music.

The actors truly resemble string musicians with their mannerisms, vocabulary and gestures while pretending to play the instruments on stage. Powers’ portrayal of Dorian is electrifying, and his scenes with Kaplan are hypnotic. When Dorian hides the treasured Lazara violin from Elliot, and Elliot frantically looks for it, the subsequent violent verbal interchange between them showcases the tensions between a couple that share a passion for music and for each other. All of their emotions explode in a performance that audiences will certainly remember.

The stage is small and the scenery simple, but this makes the actors stand out more, without distractions. The use of quilted rugs on the floor gives the stage an air of familiarity and comfort. The lighting by Tyler M. Perry ’12 helps create the intimate mood between the characters and the audience. The music is on cue every time the quartet “played” on stage, complementing the building tensions between the Lazara Quartet members.

Director Rachel Lampert does a splendid job with “Opus,” for even though the actors were working on a small stage, the action made the room feel bigger with the booming voices and characterizations of the actors. The cast’s closeness to the audience makes the performance more intimate and honest. The atmosphere was heightened whenever the actors addressed the audience in their short monologues.

“Opus” is an enticing play that deals with many different issues. The mix of suspense, drama and humor brings forth the multifarious nature of human life. The creative impulses and passions of the characters also remind the audience that the lifelong search for perfection is bittersweet.